5 amazing Russian Caves to see before you die 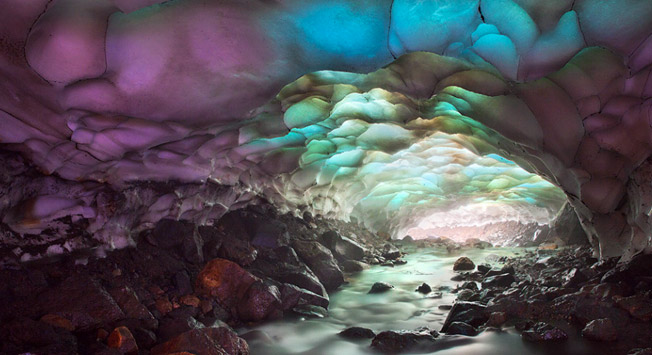 Natalia Belentsova, Denis Budkov ( http://ratbud.livejournal.com)
Here we present the five most spectacular natural holes on the face of the earth.

An ice cave, located on the Kamchatka Peninsula in the Russian Far East, is one kilometer long. It was formed due to the activity of the Mutnovsky Volcano, located nearby. A hot water spring flows right under the glacier cover, destroying the ice in its path. The walls and ceiling of the cave are made of ice and hardened lava flows.

Recently, the climate of Kamchatka has become milder, contributing to the melting of glaciers. As a result, the ceiling of the cave has grown so thin that it lets in light beams, creating surreal pictures on the walls of the cave. It is not easy to get to this ice cave independently – in fact, only speleologist and mountain climbers can do it using specialized equipment. You can visit the cave with a tour of Mutnovsky Volcano.

Remote Kamchatka had been closed to foreigners until the 1990s. Due to the remoteness of the peninsula and a relatively weak flow of tourists, the nature of this peninsula has remained intact.

Ordynskaya Cave, located 110 kilometers southeast of Perm and 270 kilometers west of Yekaterinburg, is among the twenty longest gypsum caves in the world. It was named after the nearby village of Orda and the cave consists of the “dry” (300 meters) and underwater (4,600 meters) parts.

In addition, a part of Ordynskaya Cave is the longest siphon (an underwater tunnel completely filled with water) in the territory of the former USSR – 935 meters.

The cave is located in the bowels of Kazakovskaya Mountain, a 50-meter hill with a flat top, riddled with sinkholes, one of which forms the entrance to the cave.

Scuba Diving Experience: www.diverite.com. Details if you wish to dive there.

The village of Kostomarovo is located 600 kilometers south of Moscow. These parts are called the “Russian Palestine”, because some elements of the landscape are reminiscent of Palestinian shrines: Gethsemane, Golgotha with a cross on the top, Mount Tabor, the stream Kidron... The desert landscapes of Kostomarovo, formed by chalk hills covered with sparse vegetation, have some similarities with the landscapes of the Sinai Desert.

Cave of Repentance; located here, is famous all over Russia. Its narrow arches, long corridor and ceilings, which grow lower with every meter, make sinners come to confession bent in a deep bow. The oldest structure of the monastery is the underground St. Savior Church, which can hold up to 2,000 people. The walls contain cells of hermit monks, who led a secluded life and communicated with pilgrims and priests only through small windows – to take food and notes with prayer requests. The last hermit in Kostomarovo (he lived in the Cave of Repentance) was the Holy Father Pyotr, who was shot in 1937 right in the place where he took confessions.

The cave can be visited either independently (it is advisable to get a personal vehicle for this), or as part of a tour of Voronezh Oblast.

The beauty of its grottoes and a convenient location have made this cave the most visited attraction of the Urals, and Forbes Magazine has included it in the list of the Top-10 most spectacular caves in the world. Its length is 5.6 km, of which 1.5 km are equipped for tourists. Tours of Kungurskaya Cave started being arranged more than a hundred years ago.

One of the most beautiful places in the cave is located right at the entrance – these are the Diamond and Polar grottoes. The mass of multi-year ice in these halls shimmers in the spotlight, looking like a petrified waterfall, and arches are covered with large crystals. They form fancy clusters growing so large that they fall under their own weight sometimes. Stalagmites, the famous ice columns rising above the ground, can be seen here.

There are 48 grottoes in the Kungurskaya Cave. Each of them has it’s own history and unique name. For example, there are Coral and Sea Bottom halls here; they are decorated with a stone lace that has been carved by water for 12,000 years.

Exactly seventy underground lakes strike with their beauty. They also have their own history. For example, you can see the underground Bolshoye Lake in the Titanic grotto, where the arches of the cave are reflected like in a mirror, and this reflection looks like a sunken city.

Carnallite, a mineral used in fertilizers, has transformed the walls of abandoned mines in the Urals into color masterpieces, having decorated them with fancy ornaments.

About 286 million years ago, this area was the bottom of the Perm Sea, during the existence of which, 3.5 billion tons of bottom deposits were formed. These have been extracted in the Urals since the 1930s, when the first mineshaft was made in order to open the primary deposit. A small part of the carnallite mines is still used. A special permit is required to visit the mines.