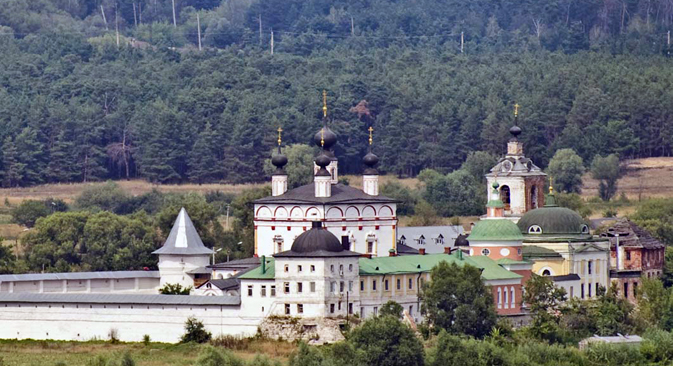 Repeatedly sacked during Russia’s medieval period, the fortunes of this small village on the Oka improved during the Soviet era.

Picturesquely located on the high right bank of the Oka River, Kashira is a charming provincial town of some 42,000 inhabitants.

Because of its role in the development of the Soviet electric power industry, Kashira for decades paid scant attention to its architectural heritage, which is only now being restored with some success.

During the medieval period, most of the towns to the south of Moscow served a defensive purpose, since Moscow was most vulnerable to attack from that direction.

Kashira was one of those defensive points, and few, if any, paid a heavier price for that role.

The first documented reference to the settlement was in the 1350s as part of the domains of Prince Ivan II, who deeded it to his son Dmitry —renowned for his major victory in 1380 over Khan Mamai of the Golden Horde.

At that time, Kashira was located on the left (north) bank of the Oka River, near the small Kashirka River.

In 1480, during the reign of Ivan III, Kashira played a part in the formal end of Tatar dominance over the Russian lands.

To get to Kashira take one of regular trains from Moscow (Paveletsky railway station) and get off in Kashira.

For a brief time at the turn of the 16th century, it provided income to Tatar princes who had transferred their loyalty to Moscow.

In 1498, the town’s spiritual significance increased with the establishment nearby of the Trinity-Belopesotsky Monastery.

A new threat from the south appeared in the early 16th century when Crimean Tatars launched numerous attacks on Muscovy. Heavily fortified in 1531, Kashira was frequently raided throughout the 16th century.

The most devastating attack occurred in 1571, when the Crimean Khan Devlet-Girei I (1512-1577) managed to deceive the forces of Ivan IV (the Terrible) and reached the outskirts of Moscow in May.

Although he did not take the Kremlin, the Crimean khan set fire to the southern parts of the city, built primarily of wood.

Hot, windy conditions led to a catastrophic firestorm that destroyed much of the city and caused tens of thousands of deaths. Kashira was among the many towns also sacked during this invasion.

But Russian forces were prepared when Devlet-Girei returned in 1572 with Ottoman support.

After his success the preceding year, the Crimean leader intended the general subjugation of Muscovy, however, his forces of over 100,000 were routed and destroyed near the village of Molodi to the north of Kashira. The Crimean Tatars never again launched an attack on Moscow.

The great Russian victory at Molodi did little, however, to revive the fortunes of Kashira, beset by plague and then famine, in 1601-1602.

fter the death of Tsar Boris Godunov in 1605, Kashira, like other Russian towns, was caught in the chaos of the dynastic interregnum known as the Time of Troubles.

The enthronement of Tsar Michael Romanov in 1613 did not end Russia’s problems. In 1618, Cossack forces led by Hetman Peter Sagaidachny, with the encouragement of a Polish pretender to the Muscovite throne (Władysław IV Waza), sacked many Russian towns, including Kashira.

In 1620 the desolate remains of Kashira were abandoned, and the town was rebuilt on the opposite bank of the Oka, with a strong earthen fortress of European design.

The fortress was never attacked, and by the 18th century Kashira had become a regional trading point for grain and cattle.

In 1779 it gained a new city plan – which remains to this day – as part of Catherine the Great’s reform of provincial centers.

Given Kashira’s turbulent history, its no surprise that almost no buildings constructed before the beginning of the 19th century survive. An exception is the Church of Sts. Flor and Lavr (1776), with a remarkably preserved 19th-century interior.

Yet, the neoclassical spirit of Catherine’s reign was transferred to a number of churches during the 19th century, including the main Cathedral of the Dormition, begun in the late 1820s and completed in 1842. Desecrated during the Soviet period, it has now been handsomely restored.

Other notable monuments include the Church of the Presentation (1802-1817), whose soaring bell tower dominates the center of town. Its interior is also being restored, as is the nearby Church of the Ascension (1826-42).

The most curious structure in the town center is an early 20th-century water tower, built in the style of a medieval castle. Other buildings in the modest downtown include examples of Soviet architecture, from a constructivist cinema and club to a neoclassical revival state bank.

Part of the charm of central Kashira is its accessible scale, which includes 19th-century houses.

Despite rail and river links, Kashira remained a minor district town into the beginning of the 20th century. That changed dramatically in 1919 when Kashira was chosen as the location for a showcase power plant that would launch the Soviet campaign to bring electricity throughout the country.

The first phase was completed in 1922 and used nearby sources of soft brown coal and peat.

The Kashira coal fired power plant has evolved over the decades to its current production capacity of 1,900 megawatts.

Although the tank armies of German General Heinz Guderian reached Kashira in the fall of 1941, power was only briefly interrupted, and the Wehrmacht was decisively pushed back in December 1941 as part of the Soviet victory in the Battle of Moscow.

The sprawling power plant Kashira GRES is clearly visible along the Oka River when approaching the town from Moscow.

Visitors to Kashira should also visit the Holy Trinity-Belopesotsky Monastery, accessible across the Oka River in the direction of Stupino.

Parts of its brick walls are from the 16th century, and its bright Cathedral of the Trinity is considered to have been built in the late 17th century.

It has now been restored as an active convent, with the usual requirements for courteous behavior within the ancient walls.