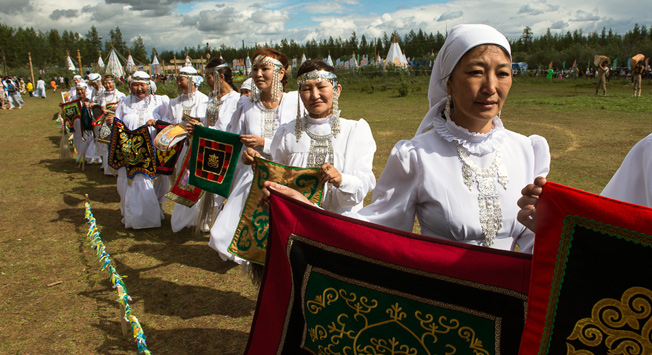 Ivan Dementievsky
During the longest summer days the Yhyakh holiday is celebrated in Yakutia. Yakuts from all over Siberia come to spend these days together. For them Yhyakh is not only a chance to rest and soak in the sunlight energy, but also to spend some quality time with relatives and friends. Some also say the Yhyakh is the time when the Yakuts celebrate the new year, the new life cycle, rebirth and new blossoming.

Yhyakh usually takes place at the beginning of summer, but it would be better if you planned your trip in advance - that way the tours, hotels and tickets will be much cheaper.

Why should you go to Yhyakh
The Yakut Yhyakh festival (literally it can be translated as abundance) is related to a cult of solar deity, a fertility cult and is said to be an echo of pagan cults.

The main place for this holiday is Yakutsk- more than 150,000 people come to celebrate it there. Elements of Yakutsk's holiday have similarities with different summer festivals of the Turks- of the Tuvinians, of the Altai, of the Tatars, of the Baskirs etc. The Yakuts have and old tradition which is rather common for the stock raising people. This tradition is to divide a year into two halves, where Yhyakh is the border between the old year and the new year, between the past and the future.

Yhyakh is not only about cultic ceremonies and mantras; it also involves games, contests and races. Although there are numerous games played, the most important one is horse racing. But you should not be surprised- horse breeding is very common among the Yakuts. As a result, everything that has to do with horses is a very important part of their lives. Other proof of this fact is that there are many local ceremonies that are related to horses- for example, the burning of horsehair or hanging horsehair on ropes.

The beginning: the ritual fire, shamans and the round dance
The celebration starts with an ancient ritual - sprinkling kumis on the ground, feeding the fire, praying to the spirits for the well-being of the people who gathered and for the blessing of them all. This is the obligation of the main shaman. A few young men help him start a fire, over which he greets the Gods, at the same time sacrificing horsehair, pancakes and kumis - this is all given to the fire.

Yhyakh is a family holiday. Every family spends a lot of time preparing for this day - they sew new holiday clothing, prepare national dishes (kumis and byppah - cultured milk product and salamat - a special kind of porridge).

Afterwards everybody takes part in the round dance Ohuokhai - a massive native dance. All the participants of Ohuokhai take each other's hand and share positive energy with one another - everybody becomes kin. The songs that are sung are devoted to the force of Nature, her beauty and greatness. They are also devoted to a favored summer and it's abundance. After this dance the 'official part' is over and everybody scatters around the meadow, where all the competitions are slowly starting. Some are interested in fights, others watch runners compete or run themselves.

The ceremony of drinking the national beverage - kumis
Kumis is a fermented product traditionally made from mare's milk - it has always been favored in Yakutia. For the Yakuts kymys is a truly holy beverage - it is presented to the holy spirits during the celebration of Yhyakh.

The algyschyt (the charmer) starts a fire and asks the gods, the spirit of fire and earth to send prosperity, the increase of crop, abundance and blessings. The holy drink - kumis, is given to all the guests. During the celebrations it is drunk from a special sacred vessel - a "choron", alcoholic beverages during Yhyakh are prohibited. Those who have never tried kumis before should take it slowly - indigestion is quite possible due to want of habit.

The meeting of the Sun
Games and contests are held till the night. Everybody waits for the most important ceremony - the meeting of the Sun - this is the culmination of the holiday. When night falls, all the people gather on a big meadow surrounded by a fence. Right in the center a special ritual is carried out with heave offering to the gods, the shaman says a few prayers and only after this ritual is everybody let out onto the meadow. The whole crowd is waiting for sunrise.

How to get there
In order to take part in the celebrations, Yakuts and visitors come to the city a few days in advance in order to finish the last preparations and to set out for the meadow in good time. This is not extraordinary due to the fact that when the celebrations actually start, it will be extremely difficult to get there in time because of the terrible traffic. This will end only after the sunrise on the next day. There are special commuter buses and shuttle buses going from Yakutsk to the place of celebration. If you don't want to be stuck in traffic, you should really get there in advance. Some tourists arrive a day before and set up their tents right next to the pavilions.