10 of the best museums and galleries in Sochi 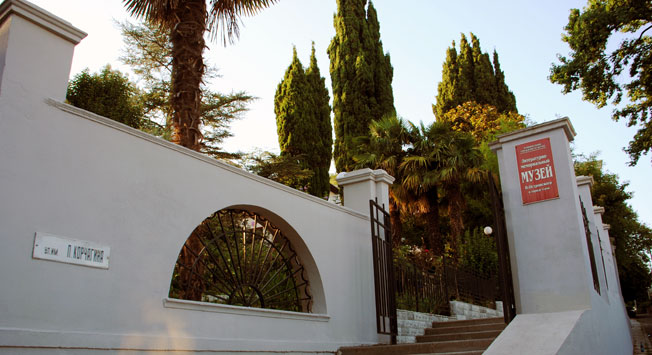 Lori Images
After visiting Sochi's bars, eating shashlyk and enjoying the nightlife, be ready to visit the city's museums.

To take a step back into the era of the 20th-century long-living political figure Joseph Stalin, you can visit his dacha, or summer house. The building has been preserved in the form and condition it was in during the rule of the formidable “father of nations.” Stalin’s dacha was built in 1936, and Joseph Vissarionovich himself came here in 1937. Some of the leader’s personal possessions and his private movie theater, where Charlie Chaplin films were regularly screened, have been preserved. In accordance with the architect’s vision, a fountain was originally built in the courtyard. But before the leader’s arrival at the Sochi dacha, his personal security officer looked at it, and when he saw the bubbling composition, he said, “Take it away! The noise covers up the sound of the enemies’ steps!” So the fountain was turned into to a flowerbed.

The Museum of Sochi contains 12 rooms covering 700 square meters. These themed rooms hold an archeological collection, items related to the everyday life and culture of the region’s population, documents and photographs, the history of how more than 100 nationalities united in a single city, and even a space room with the story of Yuri Gagarin’s flight. An English-language audioguide is available.

If you’d like to get a feel for the history of Soviet-era Sochi,don’t miss the museum commemorating Nikolai Ostrovsky, a Soviet writer and participant in World War I. Sochi was where he wrote his novel “How the Steel Was Tempered,” on which several generations of Soviet youths were raised. The particular atmosphere of the 1930s has been preserved here. Ostrovsky’s bed, desk and chairs, snow-white curtains on the windows, samovar and rolls, green lamp,inkwell and unique library can be found here. You can also see his draft manuscripts. Despite having opened only recently, the museum is already a hit. Residents of Sochi have brought over old phonographs, photos from the period, congratulatory postcards, items from everyday Soviet life and more.

Situated 12 kilometers from Sochi in the spa village of Dagomys is a private museum of old cars. Altogether, the items on display are worth more than $1 million. The museum’s creator acquired the vintage cars in the United States and then restored them in Sochi. The museum’s collection is continually growing. At the moment, guests can see Stalin’s car, a Cadillac Vassal, a 1938 Chevrolet, a Soviet Chaika, an Oldsmobile, a Dodge Dakota, aFord Eisel, a 1916 Saxon and many other models.

5. Museum of the Bedrak Artist Family

This family of Sochi artists works in the genre of applied art, and their house is a veritable museum-studio. The family has assembled an immense collection of works: watercolors, graphics, paintings and more. Visitors particularly love the Russian nesting dolls, roly-poly toys, Easter eggs, painted boxes and brooches—everyone wants to take a knick knack home.

The personality of this woman has long been surrounded by legends, not the least of which are about Joseph Stalin. The leader adored Barsova and presented her with a piece of land, on which she erected her dacha. The great opera singer moved to Sochi in 1947 after retiring from the stage of the Bolshoi Theater. Nowadays, her house museum is a city monument and tourist destination. Chamber concerts and poetry readings are held here. If you love authentic opera, or even if have never heard it, you must visit this museum.

The Derevo Druzhby (Tree of Friendship) garden-museum is one of Sochi's most unusual sites. It all started when the Soviet botanist Fyodor Zorin crossed a thin cutting from a wild lemon tree with a mandarin orange branch. Intending to produce afrost-resistant type of citrus, Zorin could not imagine that he was starting a new tradition for an entire city. The years passed and the tree not only stayed intact and grew, but also turned into a true “Tree of Friendship.” Nowadays, it is surrounded by the Garden of Friendship, and there is a museum of gifts from visitors to the garden.

This is probably the only place on the planet where a tree has its own museum. It opened in 1981 and holds a collection of gifts from different countries. These are national souvenirs, letters, photos, relics, musical instruments, coins, badges and small boxes with earth from memorable and historic places. All in all, the museum houses more than 20,000 gifts from all seven continents. You will definitely remember the coconut of record-breaking size, the Soviet candelabrum in the shape of a rocket, a teacup melted from radiation from Hiroshima, and the Soviet photographs dating back to World War II. At the end of your visit, be sure to sign the guest book, which now comprises 70 volumes.

In the late 1930s, the administrative center of the Authority of the All-Russian Central Executive Committee of the Soviet Union was built in line with the construction of the city, and then the city committee of the Communist Party of the Soviet Union was housed there for many years. In 1971, this palace became an art museum. Although neither the RSFSR nor the Soviet Union exists today, there is a building filled with fine art masterpieces of international stature that anyone can look at.The museum’s collection contains antique silver and cold weapons from the first and second centuries AD, an Old Russian icon, paintings, graphics and works of decorative and applied art from the 19th through 21st centuries. Works by such masterpainters as Aivazovsky, Polenov, Serov, Turzhansky and others are exhibited. More than 6 million people have visited the museum since it opened. An English-language audioguide is available.

In keeping with an old tradition, in Sochi every wedding party of newlywed spouses starts its family journey with a visit to the Memorial of Military Glory. Soldiers from World War II are buried here. The memorial was erected in 1985 in honor of the 40th anniversary of the victory. As in every memorial in every Russian city, an eternal flame burns here, but to see it, you’ll need to climb up the highest staircase in the city.

Jacques Rogge, along with many other prominent guests, have visited the Museum of Sochi Sport Honor. The collection includes more than 300 objects that showcase the achievements of Sochi's athletes and coaches. These figures include Olympic champions and medalists: volleyball player Vladimir Kondra, tennis player Yevgeny Kafelnikov, swimmer Kharis Yunichev and bobsledder Alexey Voevoda.

Visitors particularly appreciate the athletic equipment and accessories. For example, there is the bobsled on which the renowned Sochi bobsledder trained. Alexey Voevoda called it “bobik”—this is what mutt dogs and UAZ cars (Soviet jeeps) are often called in Russia.