Vyazma: from the cauldron of war to spiritual center 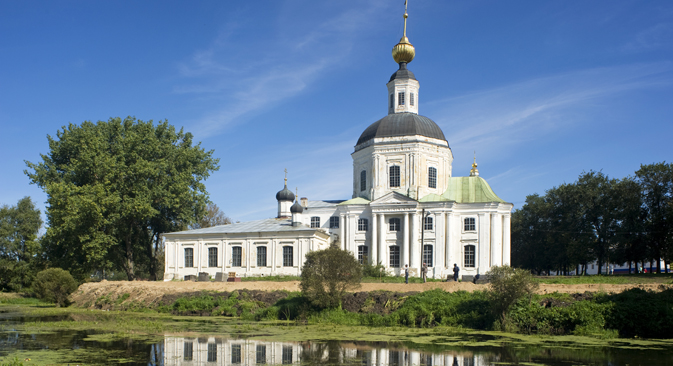 The provincial town of Vyazma has been the site of numerous battles over the centuries.

Vyazma today is a placid regional center of some 56,000 just off the Minsk Highway, the main road from Moscow west.

It is situated almost midway between two ancient centers of Russia’s destiny — 130 miles to the west of Moscow and 102 miles to the east of Smolensk. This location is the key to the town’s dramatic history.

The first mention of Vyazma dates to 1239, a time that coincides with the Mongol invasion and the widespread destruction of an already fragmented medieval Rus.

The town remained a part of the Smolensk principality until 1403, when it was seized by the Grand Duchy of Lithuania.

By the end of the 15th century, control of Vyazma shifted to Moscow. In the 16th century, it served as an important western defense point.

To get to Vyazma take one of regular trains from Moscow (Belorussky railway station) or St. Petersburg and get off in Vyazma.

During the Time of Troubles in the early 17th century, the town was again caught in a bewildering series of shifting allegiances before serving the new Romanov dynasty.

From its beginnings, the center of town was an earthen fortress erected on a high cliff overlooking the Vyazma River.

After the devastating wars of the 16th and early 17th centuries, Moscow decided to rebuild the kremlin, but without costly masonry walls. Only six towers were of brick, of which one remains: the Savior Tower.

The Vyazma fortress contained a cathedral, ultimately dedicated to the Trinity. In 1654-55 Tsar Alexei Mikhailovich rebuilt the Trinity Cathedral in an archaic style, and it was further modified and expanded in the mid 18th century.

The bell tower was the town’s highest landmark until the erection of a large communications tower in the late Soviet period. Nearby is the former St. Arkady Monastery, whose one remaining church, dedicated to the Savior (1786) is now the town library.

Also nearby are monuments to the 1812 War. During that war, Vyazma fell to the French on Aug. 29 and much of it was burned in late October that year when pursuing Russian forces engaged in a furious battle with a corps of the retreating French.

Today the town center is Soviet Square, down the hill from the cathedral. The square is dominated by a monumental granite column (2011) erected in honor of Vyazma’s designation in 2009 as a “City of Military Glory”.

During World War II, Vyazma witnessed the depths of the Soviet struggle and the long road to recovery. The center of Vyazma was severely damaged during World War II and now this part of town is a mixture of post-war Soviet architecture with 19th-century buildings rebuilt from the ruins of war.

Nearby is the large Church of the Nativity of the Virgin (1727-28), situated in a park whose pond offers a reflection of the south façade.

The most impressive architecture in Vyazma is at the John the Baptist Monastery (now convent) on the western edge of town.

Founded in 1536, the monastery has undergone the many trials of this frequently invaded land: it was burned by Polish forces in the early 17th century; rebuilt in the 1630s with a donation from the first Romanov tsar, Michael Fyodorovich; burned again during the Napoleonic invasion of 1812; repaired in 1832-36; closed by the communists; and further damaged during World War II.

Fortunately, the churches were well built and remained structurally sound.

The main monastery gate, on the south, provides a base for the brightly painted Church of the Ascension, built in the mid 17th century with a large refectory and a bell tower at its west end.

On entering the territory, the visitor is offered a view of one of the most distinctive monastic buildings in all of Russia, the Church of the Hodegetria Icon of the Virgin, with an attached chapel dedicated to John the Baptist.

This relatively small structure of irregular plan seems designed primarily as a pedestal for three soaring, richly decorated towers. Each tower is crowned with a small golden cupola. The rows of ornamental gables and the whitewashed walls are further ornamented with restored green ceramic tiles.

Perhaps this exuberant design represents a beacon, as its dedication suggests, or perhaps is commemorates resistance to invaders, as do other tower churches built in Muscovy following the Time of Troubles.

A number of the town’s churches are now being restored after decades of war, neglect and persecution. Others remain in picturesque ruin, such as the cemetery Church of St. Catherine (1770-76).

In addition to its notable architectural monuments, Vyazma has a monument of the more traditional sort. It is dedicated to General Mikhail Efremov, commander of the ill-fated 33rd army during the second battle of Vyazma in the spring of 1942.

Created by the renowned sculptor Evgeny Vuchetich, the primary author of the Stalingrad memorial complex, and erected in a still-ruined Vyazma in 1946, the statue is one of the finest examples of heroic military sculpture in Europe.

The defiant Efremov, whose much depleted army was surrounded by German forces, stands with arm outstretched, pointing toward the west. He is symbolically surrounded and protected by four Red Army troops in tense poses with various weapons at ready. One of the soldiers, mortally wounded, gazes up at the general.

Although no eyewitnesses survived, General Efremov is considered to have committed suicide on April 19, 1942, rather than surrender. His wife, Ekaterina, an army nurse, perished with him. The local German commander buried Efremov with military honors at the village of Zhary, north of Vyazma.

After the final liberation of Vyazma in March 1943, Efremov’s body was reburied at the St. Catherine Cemetery in the presence of his son, Colonel Mikhail Efremov. In 2011, Russian Orthodox Patriarch Kirill authorized a solemn burial service, with a decision that his suicide was not a mortal sin, but an act of loyalty and heroic defiance.