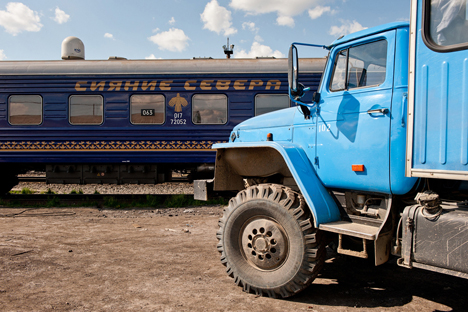 The rail tour departs from Syktyvkar, capital of the Komi Republic, and goes all the way up to Vorkuta. . Source: Anton Agarkov

A chance to see Russia north of the Arctic Circle from a comfortable hotel on wheels.

A rail tour to Vorkuta, a Russian city north of the Arctic Circle and home to one of the largest GULAG labor camps during the Soviet era, offers tourists a chance to take a look at Russia’s Polar regions from the windows of a hotel on wheels — the NorthernLights train.

The rail tour departs from Syktyvkar, capital of the Komi Republic, and goes all the way up to Vorkuta.

Unlike a regular train, Northern Lights actually waits for its passengers to board. Accompanied by a guide, tourists can take their time sightseeing in cities they pass through, and then return to their compartments — much like a river cruise, but by rail.

For all the common perception of distance, Syktyvkar is only a two-hour flight from Moscow. Adventures, however, waylay newcomers immediately upon landing.

The time of helicopter commuter service in the republic is long gone, and it now costs roughly 100,000 rubles ($3,000) an hour to charter a helicopter — which only a limited number of people can afford.

In addition, Komi roads have earned the non-too-worthy title of being the worst in Russia, which means the railway, cutting through the republic from north to south, is the only affordable means of public transport.

Trains run strictly on time, like the proverbial Swiss watch, reliably linking Komi’s key public transport nodes, where tourists can change to buses, cross-country vehicles, crew buses or even helicopters. Trains, however, are the crucial element in the system.

The Komi Republic prides itself on its natural sites, such as the remote Manpupuner Plateau. Yet the Northern Lights train goes even further — and higher — into the ranges of the Nether-Polar Urals.

With a slight groan, the train comes to a halt at Inta station. A Urals truck has been jolting and bouncing for over an hour on a road furrowed by all-terrain vehicles. Everywhere here is taiga — to the right, to the left, and straight ahead. No other vehicles can possibly pass.

The boreal forest gradually thins out, giving way to wooded tundra and then, even further north, tundra.

Ice-crystals in the tunnel of a quartz mine. Source: Anton Agarkov

Austere and incredibly beautiful, people have never completely succeeded in taming the nature of the Nether-Polar Urals.

In “high season,” local mosquitoes can draw the blood of an adult elk in just a couple of hours, the weather is prone to change three times a day, and waist-high snow drifts in June are not out of the question.

The Komi Republic employs conventional solutions to resolve its transport issues: Urals trucks are used to carry local workers and tourists alike along the broken road to the Zhelannoye base.

Still, against the backdrop of the pristine Komi nature, even this kind of bumpy road seems like a highway.

In addition to the trucks, guests are also offered a tour of the tundra expanses in all-terrain vehicles with wheels as tall as a man.

Tourist routes to rivers, lakes, isolated stone mountains and blooming peony fields in the Near Arctic and Polar regions may include stopovers.

12 most inaccessible tourist destinations in Russia

Northern Lights will soon evolve into an inter-regional rail route — dubbed “Russian North” — reaching out to unique natural and architectural sites included on the UNESCO World Heritage list for Russia.

Setting out on a journey from Moscow, Russian and foreign tourists will be able to traverse the Moscow, Yaroslavl, Arkhangelsk and Vologda regions by rail, before arriving in the Komi Republic.