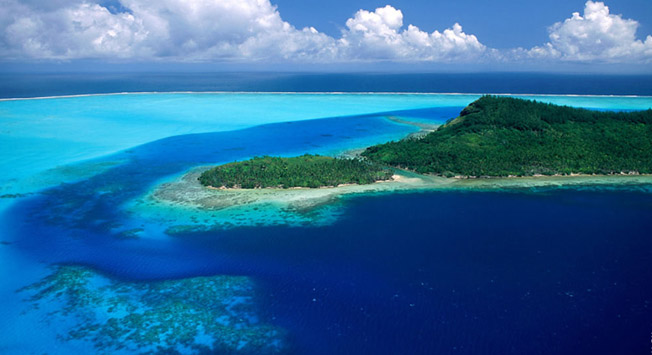 There is a place in Russia unknown even for many of residents. Not far from Sakhalin, situated Moneron Island a small oasis of wild nature and picturesque views.

The island is so small that you can circumvent it in a speedboat in 1.5 hours, or on foot within 5-6 hours—and that includes ascending the island’s highest spot, Mount Staritsky (1,443 feet). The “photographer’s dream” attracts a lot of travelers who are ready to endure the long and tiring journey from Sakhalin Island and across the Strait of Tartary.

The journey to Moneron begins at the small port town of Nevelsk, whose flotilla of cutters provides transportation to the island. The distance from Sakhalin to Moneron’s harbor is 30 nautical miles, or about 30 miles; however, sailing against the current, the small boat can barely muster a speed of 10 knots (11.5 miles per hour). This means three hours on the rollercoaster that is the Strait of Tartary’s waters—if the weather is good, that is. The slightest hint of a storm can increase the time by 150 percent.

The view of the harbor that presents itself to those who have reached Moneron is the stuff of postcards.

The small hotel complex, tucked away between green hills on the very shore, does not spoil the feeling of pristine beauty. Cozy guesthouses can accommodate no more than 20 people at a time, as bigger tour groups will inevitably upset the island’s ecological balance.

“No wonder the flow of tourists to the island is small,” says ecological guide Natalya Kruglova. “Moneron is the first marine nature park in Russia. Last year, we had about a thousand visitors over the entire season. The figure is unlikely to increase much, because we do not want the island’s unique nature to be damaged.”

In the 18th century, the island was “discovered” a second time by the French, who put it on European navigation maps. The great explorer Jean-François de La Pérouse, who accomplished a round-the-world voyage in 1787, gave his name to the strait between Sakhalin and Hokkaido. When the ships of the French expedition—the Astrolabe and the Boussole—came across the desert island, Count de La Pérouse named the island after the officer who was an engineer on his expedition.

Paul Moneron was tasked with mapping the island named after him. The first authentic map of Moneron Island was made later, in 1867, by Russian hydrographers who put it on the map of the Russian Empire. The expedition was led by one K. Staritsky, after whom the highest spot was named. Moneron Island was not Russian for long.

After Russia’s defeat in the Russo-Japanese War, the island became a Japanese possession under the name of Kaibato. After Japan’s capitulation in 1945 and the ensuing political and geographical changes in the region that followed, it was reclaimed by Russia. Moneron Island is very close to Japan: On a clear day, you can see the Japanese Rishiri Island.

The brief and comparatively recent “Japanese period” of Moneron is as shrouded in mystery as its previous history.

The Japanese claim that only a fishing village existed there, but they left behind a radio booth, a beacon and strong concrete structures. The Japanese also laid a 25-mile telephone cable under the sea, from Sakhalin Island. There is no mention of fighting for the island in the archives concerning the Soviet military operations in the Far East in 1945, yet there are many anonymous graves on the island that bear a red star.

Be that as it may, after Moneron became part of the Sakhalin region of the Soviet Union, instead of a Japanese fishing village there appeared several Soviet ones—but fishing there was soon declared unprofitable and the island became almost deserted. Its population of border guards and beacon minders rarely exceeded six, and its status as a border zone limited visits to the island.

The first marine nature park in Russia
The fact that the border island was useless for the Soviet economy was a great boon for the island’s nature.

Hundreds of rare birds made colonies on the coastal rocks, and even local fish are not afraid of people. In the summer, the grass on Moneron island grows higher than a grown adult male. The idyllic picture is completed by a picturesque waterfall some 50 feet high.

However, Moneron’s main wealth is its marine life. The prime aim of ecologists is to preserve the marine fauna, which has some species that are not found anywhere else in Russia. There is a scientific but surprising explanation to this: The “small and lifeless” Moneron Island is the only island of the archipelago that is washed by the warm, narrow Tsusima Stream coming from the subtropical south.

This is why the incredibly clean waters of Moneron teem with abalones, sea urchins, sea cucumbers and other kinds of exotic fauna. The crystal clear waters around Moneron are an underwater photographer’s dream. You can see the bottom many feet below. The few people that have visited the place are eager to go back to Moneron.

“I have been to many places on my yacht,” says Dmitry Medvedev, an experienced diver bearing the same name as the Russian prime minister. “But I have never seen such beauty as on Moneron Island. You don’t even need a torch, because the water is so clear. There is no other place like it on the Far Eastern coast.”

Dmitry submerges with a special camera, but even those who use an ordinary camera will have plenty to photograph—eared and ringed seals, rock grottos with a natural lime color on the walls, beautiful cone-shaped mountains and artifacts from the Japanese and Soviet periods.

First published in Russian in strana.ru.