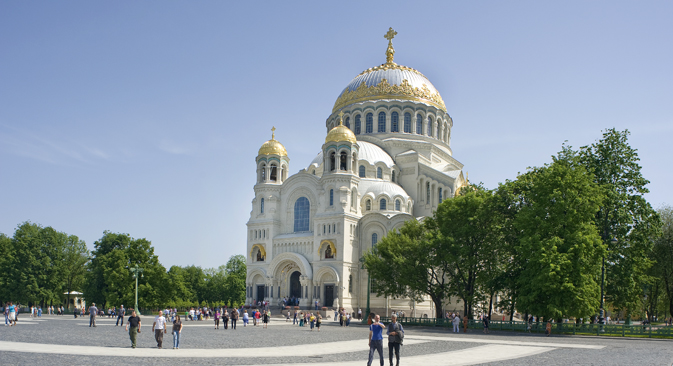 Modeled after the great Hagia Sophia, the St. Nicholas Cathedral celebrates the 100th anniversary of its consecration this summer.

There are a multitude of churches in Russia dedicated to St. Nicholas, but none is so grandiose as the Kronstadt Naval Cathedral of St. Nicholas, originally consecrated 100 years ago. Located at the Kronstadt Naval Base near St. Petersburg, the enormous cathedral was built with the personal support of the last tsar, Nicholas II and consecrated in June 1913, during the 300th anniversary year of the Romanov dynasty.

The cathedral's dedication to St. Nicholas reflected not only the role of that saint as the protector of seafarers, but also a connection to the imperial patron, Nicholas II. Equally important, the Byzantine style of the cathedral design proclaimed the origins of Russian Orthodoxy in Constantinople.

To this day, the St. Nicholas Cathedral is the tallest building in Kronstadt. The naval base was established in May 1704 by Tsar Peter I (the Great) on Kotlin Island in Gulf of Finland. Its primary purpose was to protect the sea approach to St. Petersburg, founded at the mouth of the Neva River exactly one year earlier.

The origins of the cathedral were prolonged and complicated. In the 1730s, a wooden church dedicated to the Vladimir Icon of the Mother of God was erected at Kronstadt. Frequently rebuilt, this church was finally replaced by a masonry Cathedral of the Vladimir Icon, constructed during the 1870s. Reopened in the 1990s, it is the active center of church life for the parish.

The possibility of constructing a cathedral on Kronstadt had been formally discussed since the 1830s, particularly one whose imposing size would serve as a memorial to those who served and died in the service of the Russian navy.

This concept was finally advanced in 1897 when Nicholas II approved a proposal from Vice-admiral Nikolai Kaznakov, commandant of Kronstadt, to launch a campaign for the construction of a new cathedral.

The project was aided by its association with Father John of Kronstadt, a charismatic yet controversial priest adored by the broad mass of Orthodox laity and also held in high regard by the church hierarchy and by Nicholas himself. Active support was also provided by the revered Vice-admiral Stepan Makarov.

In 1901, imperial approval was granted to cathedral designs by Vasily Kosiakov, one of Russia's leading architects in combining traditional church design with innovative construction techniques. He was especially inventive in the use of reinforced concrete arches to cover large spaces. In preparation for the project, Kosiakov traveled to Istanbul and Greece to study Byzantine monumental architecture.

The site chosen for the cathedral was Anchor Square, a large space formerly used for depositing used ship anchors. Construction work, begun in 1902, was basically completed in 1907. Another five years was required for the exterior and interior artwork.

The cathedral stopped being used actively in 1927 and was closed in 1929. In the following decades the interior, substantially modified, was used as a cinema, a club and concert hall, and a naval museum.

The interior artwork was extensively damaged from neglect and reconstruction. The painstaking work of repair and renovation, often aided with archival photographs, proceeded gradually throughout the first decade of this century. The final consecration of the cathedral occurred on May 28, 2013.

The design of the St. Nicholas Cathedral pays homage to one of the world's greatest architectural monuments, Hagia Sophia, built in the sixth century by Emperor Justinian in Constantinople with a vast unobstructed domed space. The expanse of the exterior façades, skillfully accented with structural details, ascends to the dome and its landmark cross.

The exterior of the cathedral was clad in yellow brick with terra cotta details. During the restoration, a questionable decision was made to cover the surface with a light beige paint, thus giving a monolithic impression, but obscuring the excellent quality of the original brickwork.

The west front in some ways resembles that of western medieval cathedrals. The central feature of the west façade is a massive portal, flanked by two smaller portals, each with perspective arches.

Over the side portals are mosaic panels that depict saints to which the three cathedral altars are dedicated. On the left are Sts. Peter and Paul, while the right panel depicts St. Nicholas and the Bulgarian St. John of Rila. Each of the upper corners supports a bell tower.

The central portals of the west, south and north façades are decorated with mosaic images of sacred figures, including Christ, St. Nicholas and the Kazan Image of the Virgin. All of the mosaics were created by Vladimir Frolov at the Alexander Frolov studio, the leading producer of mosaics in Russia at the turn of the 20th century.

Dominating the upper part of the façades are three monumental circular windows with stained glass work visible on the interior. The west window depicts the Deesis (a traditional icon image of Christ enthroned flanked by Mary and John the Baptist); the north window the Crucifixion, and the south window portrays one of the miracles of Christ, the Draught of Fishes. Originally installed in 1913, these enormous glass panels were recreated by the Alexei Yakovlev studio.

On the interior, the upper vaulting was covered with monumental paintings (now restored) by Mikhail Vasilyev, some of which imitate the effect of mosaics. Of special note are various depictions of Christ – within the apse, over the apse and within the main dome.

The choir galleries on the upper level are supported by massive paired columns. Like the original, the recreated icon screen is of white marble with Inserted mosaic work. The central space of the cathedral is illuminated with expansive suspended chandeliers from the Byzantine tradition.

In front of the cathedral is a large square that is often used for religious processions. At the southwest corner of the square is a Monument to Admiral Stepan Makarov, who perished when his flagship was sunk by a Japanese mine In April 1904. The memorial purpose of the St. Nicholas cathedral and the stunning artistic display of the interior combine to create an unforgettable impression.