River ride across the Mississippi of the East 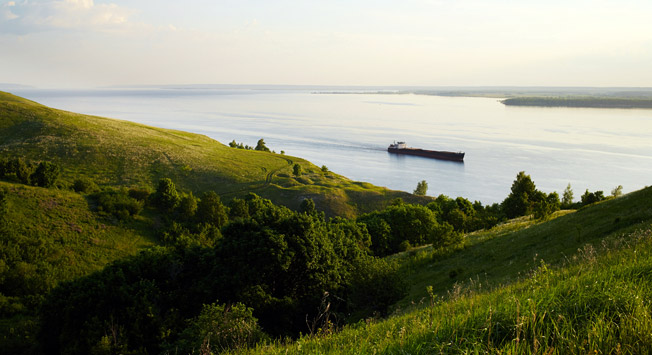 Getty Images, Fotobank
From the monasteries immersed in the Taiga forests, to the cities suspended between ancient and modern—the journey across the Volga River recounts the Russian spirit. Twenty nationalities, hundreds of cities and fragments of a thousand-year-old culture await along the way.

The Volga is one of the largest rivers in the world and the longest river in Europe. It is so long that its source and mouth are located in areas that endure completely different seasons. Its source is in the Valdai Hills—at the same latitude as Denmark and the North Sea—and its mouth lies at the latitude of Lake Como in Central France. When the lotus blooms in the Volga Delta in late July, the residents of Volgoverkhovye, a village near the source of the river, are just beginning to enjoy the first days of summer.

Monasteries sinking in the black waves of taiga forests, fishing villages with wooden houses, towering concrete dams of water power plants… The Volga is silvery Valdai bluebells, Astrakhan watermelons, the first nuclear bomb tests, and the endless steppe with its sheep and their herders. It is the deserts and salt lakes, dozens of flooded villages and hundreds of saved lives, blooming lotuses, and fish that can be caught with a scoop net. The Volga is Russia—infinite, boundless, calm and stormy, with thousands of faces reflected in its waters, filled with fractions of history.

The ancient Romans called the Volga “Rha,” which meant “generous.” The Mari referred to it as “Yul,” or “the road.” The Baltic tribes that used to live in the Upper Volga regions used the word “Ilga,” meaning “long,” and the Arab chronicles of the 9th century referred to it as “Atil,” or the “river of rivers.” The ancient Slavs first mentioned the Volga in the Primary Chronicle—the oldest historical compilation that has survived to the present day.

There are 22 Orthodox monasteries on the Volga. The capital city of Muslim Tatarstan, Kazan, with more than one million residents, also stands on the river. In the middle of the 16th century, Kazan, the capital of the Khanate, was an unassailable fortress. Ivan the Terrible ordered a wooden fortress to be built at the confluence of the Volga and Sviyaga rivers, and Sviyazhsk became a military base of the Russian army during the siege of Kazan.

The pinnacle of Sviyazhsk history was the construction of the Kuybyshev Reservoir in 1957, which required flooding a large area, including part of the town. The historic city center was saved only because the fortress was originally built at a strategic height. This is how Sviyazhsk became an island isolated from the rest of the world. There are 37 cultural monuments on the island, including two monasteries and seven churches. Some 200 people currently reside on the island.

The Volga witnessed the rebellions of Yemelyan Pugachev and Stenka Razin in the 17th and 18th centuries, respectively. Following the connection of the basins of the Volga and Neva rivers in the 19th century, 300,000 barge haulers started working on the river. They towed barges upstream in spring and fall, during the flood seasons. Rybinsk, which stands on the Upper Volga, became the capital of haulers.

Despite the prohibition of manual barge hauling by the People’s Commissariat of Transportation in 1929, haulers continued working on the Volga tributaries until as late as World War II. The water power plants built on the river before the war provided power to arms makers throughout the European part of the Soviet Union during the war.

There are four cities with more than one million residents on the Volga: Nizhny Novgorod, Kazan, Samara and Volgograd. In all, there are more than 300 populated places on the Volga, where representatives of 20 nationalities reside, from Finno-Ugric peoples to southern nomads. The Astrakhan steppes that flank the Volga banks are considered fragments of the Grand Steppe, which once stretched throughout Eurasia, from the Pamir Mountains on the border between China and Afghanistan, to the Danube Delta. The descendants of ancient nomadic tribes—the Kazakhs, Tatars, Nogai people and Turkmens—still live in the Astrakhan steppe.

The endless plains, shepherds with 10,000-strong flocks, and sand dunes; the weather that changes every hour, the ground that is covered in camel thorn, and free wind that causes sandstorms are all symbols of freedom for nomadic peoples. The capital of the Golden Horde, Sarai Batu, also stood on the Volga. A few centuries later, the site became home to the Kapustin Yar test range, where space satellites were launched and the Soviet army held exercises. Around 620 miles to the north of the test range, near the source of the Volga, stands Volsk, which became one of the centers of Russian Old Belief back in 1780.

The villages of Old Believers alternate with fishing villages, and Muslim towns stand next to white-stone Orthodox monasteries that perch on high river banks—some close to each other, others so far away that no one will hear you however loud you shout.

Lake Elton is the largest mineral lake in Europe and one of the most mineral-rich lakes in the world. It is just 2-3 inches deep in summer and up to 5 feet deep in spring. The lake lies 50 feet below sea level.

Lake Baskunchak is a sort of cavity on top of a salt hill that goes thousands of feet deep into the ground and is covered with a thick layer of sedimentary rock. The lake is mostly fed by underground springs. Many of the springs flow into the lake along its northwestern shore, bringing more than 2,500 tons of salts into the lake every day. Salt depth in the lake reaches 3.7 miles. The extremely pure salt of the lake accounts for up to 80 percent of Russia’s salt production: Baskunchak churns out between 1.5 and 5 million tons of salt annually, depending on the consumption level. Baskunchak Railway was built to transport salt from the mines.

“Raspberry” lakes are also located in the vicinity of Astrakhan. These salt lakes are peculiar not only because of their color, but also because of their odor; this salt has a faint raspberry smell. This is why the salt produced at these lakes—up to 100 poods (roughly 3,520 pounds) annually—was thought to be of the finest quality and delivered exclusively to Empress Catherine II. With its pale pink or orange color, this salt preserved the aroma of raspberries or violets. Scientists attribute these properties to the abundance of red brine crustaceans in the lakes. They dissolve in the salty water, thus lending the salt its color and aroma. These crustaceans are the favorite food of flamingos.