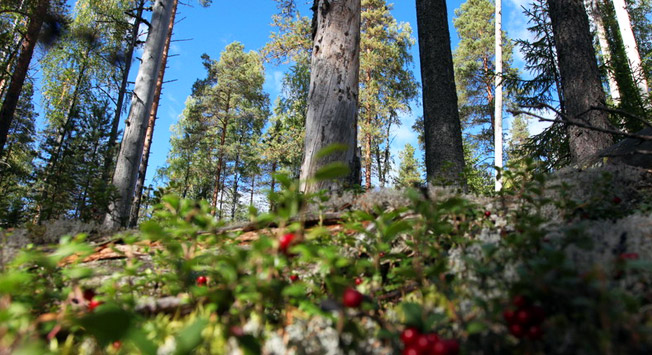 Grigory Kubatian
“This will be a mystical tourist centre, a combination of an ethnographic centre and an amusement park,” says A.M. as we drive into the village. “This is a truly mysterious location,” he adds, “not far from here is the abandoned village of Noydala, previously home to Vepsian shamans. This is also a common destination for cryptozoologists who come here is search of the flying serpent.

A.M. is not some loon - he is a serious real estate developer who previously oversaw the construction of shopping centres and other large projects. The construction of the Noydala Tourist Resort has been a sort of hobby project for him for the past seven years. He bought an abandoned tourist resort along with several village houses on the border between the Leningrad and Karelia regions, and is now building a medieval Viking town on the site. A.M. is certain that Vikings once inhabited Noydala, a claim, which is supported by the findings of a team of archaeologists, who recently found a Norwegian battle-axe and the remains of a 10-11th century wooden building, which resembles a Scandinavian trading post.

The developer plans to make Noydala into a magical medieval town inhabited by artisans, almost like an alternate reality of sorts. Everyone is welcome to come there and share his or her skills, while regular tourists will have to pay to learn various crafts or to buy the merchants’ wares. Any artisan can switch roles and become a tourist in order to spend the money he or she has earned, while any tourist with a valuable skill can become an artisan. Expert blacksmiths, musicians, basket weavers, yoga instructors, kayak guides, and herbalists are all welcome.

For now there is no town at the site, which sits on the border of the Vepsky Forest National Park, but there are a few well-kept hunting cabins, an Orthodox church, a corral, and an impressively large Scandinavian fort with a large tower. The massive logs, which will serve as the main construction material, had to be shipped in from far away because in the local forests such large trees exist only in protected areas. Noydala currently accepts only tourists with invitations, and is quite remote and expensive to travel to. Right now it resembles a private club for the wealthy or a noble estate more than a tourist resort.

There is a Russian bathhouse, tea served in samovars, and fresh milk. The only thing that’s lacking to complete this quintessential Russian arrangement is a tame bear. “But there are bears here! They come in winter. I say, let them come!” says Mr. Buryanin, the manager of the estate. He is a strong, tenacious, capable and slightly crafty-looking man who lives at Noydala all year round. He takes care of the estate, pickles cucumbers, and goes mushrooming in the forest on his jeep. If the need arises he can devise a table and chairs out of a tree trunk in fifteen minutes using just his axe, or fix a broken off-roader with only metal wire and electrical tape.

“Today we’re going to Noydala,” declares A.M. He is referring to the abandoned shamanic village, which is located 30 miles down an unmaintained forest road from the resort. A.M. is sure that at one time, this village was thought to have mystical properties and that shamans from the surrounding areas would come here to conduct their mysterious rituals. North-western Russia, including the Kola Peninsula, Karelia, and the Prionezhye is generally a mystical region, considered by some to be the legendary Hyperborea. Prehistoric archaeological sites such as petroglyphs, solar circles, and stone labyrinths can be found in this region.

Another regional mystery is the construction of seyds, or large stones which sit atop several piles of smaller stones. They serve as either idols or gravestones, and there is an entire network of them. Many researchers believe that seyds were placed along geological fault lines where tectonic plates were colliding with one another, and were meant to somehow absorb the energy from the collision. Shamans were supposedly able to release this energy by rotating the stones and use it to change the weather or cast other spells.

“Shall we go to Noydala on quad bikes?” excitedly asks Lena, A.M.’s personal assistant. She has already put on her helmet and gloves, and looks ready to traverse the evil forest with its flying serpents and woodland spirits.

“We have something even better planned!” replies A.M., and leads us all to an enormous garage. The garage houses an armoured monstrosity called a GTT, which stands for “military amphibious tracked towing vehicle". “This is a Soviet-era piece of equipment,” A.M. explains. “I bought it back during Perestroika by chance. Back then you could even buy a tank if you wanted to, but what do I need a tank for? This thing you can use for anything from mushroom picking to hunting, and now we will use it to travel to the shamanic village!”

The engines turns on with a roar and the GTT billows black fumes while A.M. drives it out of the garage onto the dirt road, leaving deep track marks. The rest of us jump into the back of the vehicle, while A.M. sits at the controls in his tank helmet. The controls themselves consist of two levers instead of a steering wheel. These levers control the speed of each one of the tracks individually, and spinning one of them faster than the other allows the vehicle to turn.

As we pass the nearest village its inhabitants look at us nervously, wondering if we are out on manoeuvres, or whether a war has just broken out. However, once they see Lena and I in the back they realize that it is just some city folk having fun, probably going mushroom picking.

The road then takes us into a forest, and in a few miles turns into what Russia has used as a secret weapon during many a foreign invasion. The road is so muddy that it is capable of swallowing up not only a jeep or a truck, but also a NATO tank. Fortunately, we are driving an amphibious vehicle that does not sink, but instead turns into a boat. Even so, a few times it was easier to leave the roadway and travel through the forest, although I should clarify that this was only easier for the driver, while the passengers felt like they were inside a washing machine in either case. You get thrown around during the bumpy ride and sticking your head out will only get you a face full of tree branches. I envied Lena’s foresight for bringing a helmet and riding gloves.

The GTT stops and I jump out. On the side of the road I see a scabre stalk mushroom, ideal for frying or use in a soup, and a blueberry bush a few yards away. I grab a few berries, collect the mushroom and return to the vehicle. During that short break, I notice just how wild and beautiful the northern forest is. The unfortunately commonplace plastic bags and rusted pieces of metal are nowhere to be seen, replaced instead by moss-covered logs and branches.

If the Leshy does indeed exist, he must live here. According to Russian folklore, the Leshy is a short moss-covered man, the very sight of whom can drive people mad. Even today the locals try not to anger the Leshy and ask him for forgiveness before chopping down a tree; they even leave some food on the tree stump as payment.

However, we are not afraid of the forest spirits, for we have a tank! Truth be told, the “tank” is rather old and periodically stops to let Buryanin jump off and make sure that the pins holding the tracks together have not come loose. If they are not put back into place, the antiquated track will disintegrate into fragments, and getting a replacement is next to impossible these days.

After a few hours we exit the forest and see the sun reflecting off the surface of a lake.

“See that pile of stones over there? That used to be a pagan temple, a sacred place,” says A.M., pointing off to the side. I squint and think that I can just about make out some stones on the lakeshore.

The Vepsians supposedly worshiped such stones and sacrificed money, butter, eggs, and bread to them. They also revered trees, particularly juniper, which they decorated with colourful ribbons on certain holidays. This tradition also exists in the Altai Mountains, Buryatia, Mongolia, and Tibet. The Vepsians even resembled the Mongols physically, with their short stature, dark hair, narrow eyes, and wide cheekbones.

We turn the engine off and go walking around Noydala, which is named after the Vepsian word “noyda” meaning shaman. The former shaman village now consists of two dozen dilapidated log cabins. Inside we can see whitewashed traditional stoves and sheets of birch bark in place of windowsills. The roof is covered in woodchips instead of shingles, while the corners of the rooms are full of cobwebs. Despite its seeming harmlessness, the place has an eerie feel to it.

A long time ago heads of animals such as bears and wolves were mounted above the doorway. These animals were considered to be the inhabitants’ guardians. Sometimes the head of a pike was put above the doorway or attached to a man’s belt during his wedding in order to safeguard and increase his sexual prowess.

“There are few real Vepsians left,” says Lena. “There are still a few old fortune tellers living in the surrounding villages, but there are fewer and fewer of them every year. However, there was a time when the Vepsians were feared even by the Vikings – that’s according to a group of Norwegian historians who visited our compound a while ago.”

Fly-bane mushrooms grow right in front of the houses. Their red and white spotted caps can be seen from far away.

Young aspens and rowans grow through the collapsing roofs of the houses. Rowans were used to make charms that relied on the forest’s own energy to ward off evil spirits. Aspen was considered the tree of the dead, and aspen spears were used to skewer “bad” graves, for example those belonging to people who died an unnatural death. This was done to prevent their spirits from haunting the living. It is a good thing that aspens grow in Noydala - you know, just in case.