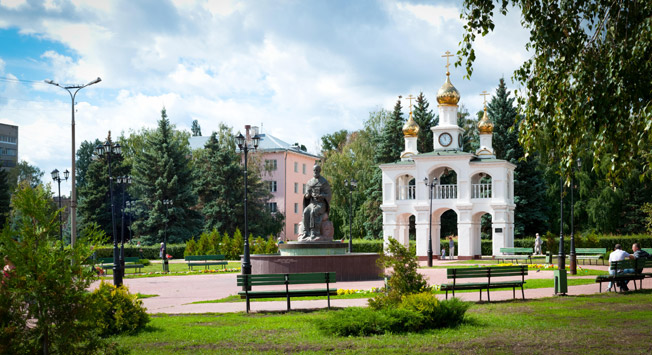 Lori Images
The city was founded almost 300 years ago under the original name of Stavropol (translated from Greek it means "city of the cross") to protect Russian lands from the nomads.

The beaches and the embankment of the Volga in Togliatti are some of the best in Russia, the river here spreads out over four kilometers (2.5 miles). The best place to spend time near the Volga is on the embankment, which has many cafes near the monument to the city's founder, Vasily Tatischev. In the 19th-20th centuries Stavropol was known for its sanatoriums that treated patients with kumis. Kumis is a sour-tasting drink made from fermented mare's milk that is considered to be very healthy. You can still try some high quality kumis at local cafes - just be careful because some types of kumis are produced with a high alcohol content (from 2.5% to vodka-like levels of 40%).

In the middle of the twentieth century after the construction of the Kuibyshev (now Zhigulevsky) hydroelectric plant, the city was moved to a new location, just to the north, and so where houses once stood is now the largest reservoir on the Volga River.

The Zhigulevsky hydroelectric plant was formerly closed to the public, but now welcomes visitors (tickets can be ordered online, the site is in Russian, but there are English-speaking tour guides http://www.city-on-volga.ru/ , (8482) 26-45-04, 952-143).

In 1964, the construction of the Volga Automobile Plant turned the city into the capital of the Soviet car industry. In the same year it was decided to change the city's name to Togliatti, in honor of Secretary General of the Italian Communist Party Palmiro Togliatti, who had died a week earlier during a visit to Artek children's camp.

Fans of Soviet vehicles and military equipment should visit the open-air museum of technology. It boasts one of the largest collections in Russia of military equipment: tanks and airplanes, helicopters, air defense systems and radar, and even the huge B-307 submarine.

During the industrial boom, Togliatti grew almost as fast as Houston. The new industrial giant was supposed to be a model city, the prototype of the future socialist paradise, with innovative architects and builders being given the task of making it a reality. Now Google Maps shows how the model city resembles a perfect drawing: straight as an arrow streets, the discreet outlines of panel buildings, and vast green spaces between them.

But the most impressive aspect of it all is the pine forest right in the middle of the city. The forest covers eight hectares, almost 20 acres, and encompasses about a quarter of the entire area of Togliatti. The entire city comes here to relax, breathe clean air, and to escape the sterile Soviet architecture and the emissions from chemical plants in the shade of the forest.

In addition to the pine trees there is the Spin-Sport park ( Komsomolsky highway 28 ). The park is famous primarily because of the fact that no tree was planted there by hand - it is a completely natural growth forest. It also features cross country ski paths in winter and in summer people play tennis and mini-golf, or take a dip in the pool. Ticket prices are €12.

The best time to visit the city, and to take a cruise on the Volga, is June and July. In the summer the Kuibyshev water reservoir shimmers with dozens of white sails. Togliatti is a major yachting center. The numerous yachting clubs are happy to rent out a yacht or give sailing lessons. The city regularly hosts yachting championships at different levels. Togliatti is the starting point for the popular Zhigulevskaya Around the World, which is a water route for yawls and kayaks around Samara Luka wildlife reserve, as well as the Volga Cup regatta.

Samara Luka and Zhiguli Mountains wildlife reserves are located not far from the city. The picturesque views of the Volga, Luka, and Zhiguli serve as the natural backdrop for the Classics at the Volga international classical music festival. But not only the classics are heard here. The Power Plant festival of electronic music is held just outside Togliatti.

Art lovers shouldn't miss the Togliatti Museum of Art, which exhibits a unique collection of works by contemporary artists ( Lenin Boulevard, 22 ). The museum regularly presents new exhibitions and is constantly adding to their permanent collection. Walking through the halls and listening to a tour guide costs €3.