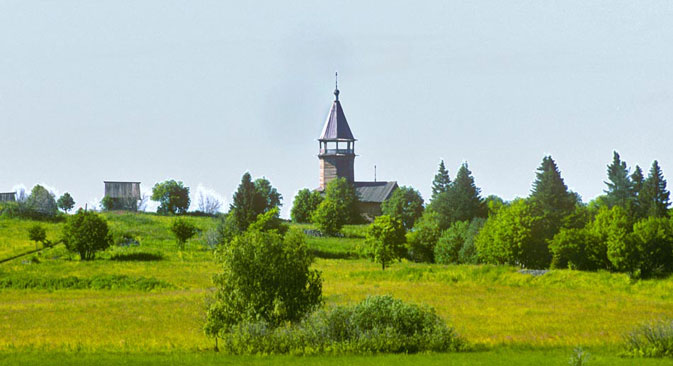 With its ample forests the Republic of Karelia in northwest Russia is rich in monuments of traditional wooden architecture, particularly churches. The most widely visited site for these works of traditional art is the fabled museum island of Kizhi. Yet there are many other distinctive monuments, a number of which are located in the region around Kondopoga, located 30 miles north of the regional capital of Petrozavodsk.

The origins of a settlement on the site of Kondopoga have been dated to the turn of the 16th century. Its favorable location on a bay near the mouth of the Suna River in western Lake Onega made it a natural site for trade and fishing. During the medieval period, Kondopoga was considered part of the territory of Kizhi. All structures, including churches or chapels, would have been built of pine or fir logs.

Kondopoga’s economic significance increased in the 18th century with the discovery of iron deposits that supplied the large metalworking factory established by Peter I (the Great) at Petrozavodsk in 1703. In the middle of the 18th century extensive marble quarries were developed at the nearby village of Tivdiya, located on a river of the same name. By the 1760s the marble quarried here could be transported to St. Petersburg via a system of waterways linking Lake Onega with the Neva River.

The growing importance of Kondopoga during the reign of Catherine II (the Great) no doubt contributed to the construction in 1774 of the Church of the Dormition, one of the most remarkable monuments of wooden architecture in the Russian north. Situated on a narrow cape extending into Chupa Bay (part of Lake Onega), the Dormition Church could be seen over water like a beacon from a great distance.

To emphasize this prominent location, the master builders created a tower 138 feet in height. Toward the top of this soaring octagonal structure of notched pine logs is a horizontal band resembling a chevron pattern. These small attached gables not only decorate the structure but also protect it from excessive moisture in this damp region. The bottom of each “V” has a wooden rain spout that collects and expels precipitation away from the log walls.

The church culminates in a tall “tent” tower covered in wooden shingles and crowned with a cupola and cross. Attached to the west of the main structure is an elevated vestibule, or refectory, that is reached on the outside by a decorated staircase attached to the south façade.

The inside of the vestibule is a clean area formed by log walls adorned with icons and painted posts that support and divide the space. The entrance to the worship space is through a painted doorway that frames a view of the icon screen. Passing from the low vestibule to the tower space creates an unforgettable impression. The tall interior, illuminated by window light, is bounded by an icon screen that conceals the altar.

The interior is covered by a painted ceiling, or "heaven,” a distinctive feature of northern Russian log churches. These "heavens" are an ingenious combination of traditional art and architecture. They consist of a polygonal form segmented by flat beams extending from the top of the walls to an elevated ring in the center. The beams incline upward and create a frame that is self-supporting between the walls and the ring where they meet at the center. The painted panels are in the shape of narrow triangles and are laid upon the inclined frame without fasteners.

The number of triangular panels can vary, but in the Dormition Church there are 16. They depict angels, including the primary archangels. The ring in the center contains an unusual image of Christ as a priest standing at the altar.

During World War II, Kondopoga was occupied from early November 1941 until the end of June 1944 by Finnish forces, who were at that time allied with Germany. Although the town’s industry was ransacked, the Dormition Church—located on the outskirts—was untouched. A thorough study and conservation of the church was undertaken in the 1950s.

In the 1990s the interior of the Dormition Church was again the object of careful restoration, even as the church was returned for active parish use. The complex balance between parish use and the need to preserve this unique historic structure led to the construction of the new, more spacious wooden church, completed in 2009 and dedicated to the Nativity of the Virgin.

There are a number of other wooden architectural monuments in the Kondopoga area, including the Chapel of the Kazan Icon of the Virgin at the village of Manselga. With a bell tower over the entrance in the west, the Kazan Chapel follows a typical form for wooden chapels in Karelia during the 18th and 19th centuries.

A distinctive expression of this traditional form is the late 18th-century Chapel of the Three Prelates, originally at the village of Kavgora in Kondopoga region but subsequently transferred to the museum on Kizhi Island. This intricately crafted structure, with decorative carved end boards, culminates on its west end with a tall octagonal bell tower. Like the Dormition Church, it has an elevated covered stairway to provide access over the high snows of the Karelian winter.

The most unusual variation of the traditional wooden chapel in the Kondopoga region is the diminutive Church of St. Peter at Martsialnye Vody (a word play on the Russian for “mineral waters” and the god Mars). Martsialnye Vody was founded by Peter the Great in 1719 at the site of mineral springs and is considered Russia’s first spa. Peter visited Martsialnye Vody on four occasions between 1719 and 1724.

It is possible that the Church of St. Peter was built to the tsar’s own design, which combines traditional elements with a baroque dome over the main space. Although the spa fell into decline after Peter’s death in 1725, it was revived in the late 19th century and again in 1964. The Martsialnye Vody spa functions to this day, with the Church of St. Peter miraculously preserved as a link to the time of Peter the Great.