7 tasty Ideas for a Quick Lunch in the Olympic capital 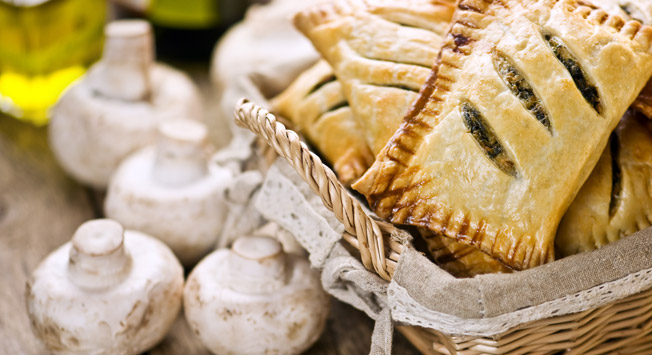 Lori, Legion Media
In Sochi, people are especially fond of "street food" – a snack on the go or an outdoor lunch.

Pirozhki (knishes) – the main food of Russian folk tale heroes and an integral part of all Slavic feasts. They can be baked or fried, sweet or savory. The filling can be anything – meat, fish, vegetables, or fruit. This popular Russian snack is sold on practically every corner in Sochi. They cost approximately 30 – 40 rubles (from 1 USD to 1 euro). Just be sure to tell the vendor which filling you prefer so that you're not surprised with peach or cottage cheese filling instead of fish. Be sure to try the vatrushka (danish) – a round sweet open faced bun filled with cottage cheese and raisins.

Authentic Caucasian bread – lavash (pita) – can be purchased piping hot in many places in Sochi. There are Georgian mini-bakeries on the main streets of the resort city and in the sleeping districts as well. Here, fresh lavash is baked in clay tandoors, right in front of the customers. This Caucasian oven looks like a large ceramic vase, with 400°C temperatures inside, and the inner walls covered in salt. The raw pitas are “glued” to these salt covered walls and removed ready several minutes later. The shape of the lavash resembles a water drop. “The crest” of this drop is considered particularly valuable. Many customers break it off immediately, even while at the bakery, while the lavash is still hot. Thin, sheet-like Armenian lavash is also sold at these bakeries. It is considered a delicacy as it is prepared without yeast or oil.

The daily diet of athletes coming to Sochi includes one of the culinary masterpieces of USSR – chicken Kiev . It is prepared in the following manner: a piece of cold butter is wrapped in a well tenderized chicken breast (sometimes cheese, herbs or mushrooms are also added). The resulting cutlet is coated with egg, dipped in bread crumbs, and deep fried. These cutlets are loved in Sochi and served eateries, “delicatessens” and special kiosks. Foreigners may find the taste of “Kiev” familiar because of its similarities with chicken nuggets from McDonalds.

Make your own sandwich ! It’s very simple. Head to any grocery store and buy a loaf of black bread for 15 – 18 rubles (0.5 USD – 0.5 euros). Traditional Russian black bread from the Sochi bakery with vibrant names such as "Slavic", "Baltic", "St. George", "Borodino", and "Merchant" are sold in many stores pre-sliced, perfect for a sandwich. It is customary to put a slice of sausage on the bread. Pork and beef salami, smoked and dried sausages are especially popular. You can buy a whole stick or a small piece of sausage at the supermarket. A special processed cheese called “Druzhba”, the taste of which is very familiar to Soviet era Russians, also goes very well with black bread. This gentle natural cheese is in high demand in Russia to this day.

To quickly and deliciously feed the whole group is no easy task, but in Sochi it’s easily solvable. On the streets of the resort city, guests are offered traditional Ossetian pies , which at first glance resemble large pizzas. They are baked with different fillings – meat, herbs, potato, chopped beet leaves, slices of pumpkin, beans and always topped with homemade cheese. The secret to Ossetian pies is that there has to be as much filling as there is dough. The thinner the dough, the more skillful the chef cooking them is considered. It’s best to eat the Ossetian pita while it is hot.

Like soda ? Check out the Russian prototypes of these drinks, which are still being made according to old Soviet recipes. Back then, lemonade machines were on the streets of soviet cities. People would line up to drink the beverage from a single glass, which they would rinse after every use right there in the machine. Today, the most popular names from those times are found in every store in Sochi and sold in glass bottles, "Buratino", "Sitro", "Dyushes", and "Tarkhun".

7. On the shelves in Sochi you can find the most famous Russian gingerbread , Tula, as well as its local counterpart "Sochi souvenir". The lusciously sweet gingerbread is filled with apple jam and the outside is coated with icing. There is only one shape of the Tula gingerbread sold in the resort city – a rectangle slightly larger than an iPhone. The Sochi gingerbread is round and about the size of a dinner plate. Its packaged in a cardboard box and thus can make a great gift to bring home for family and friends. You can buy the “Sochi souvenir” at retail stores of the Sochi bakery. If you have a sweet tooth, take a closer look at the counter. We recommend you check out the baklava, a multilayered nut dessert soaked with honey and the local cookie “oreshek” with condensed milk and “gata” with cheese or poppy seeds.