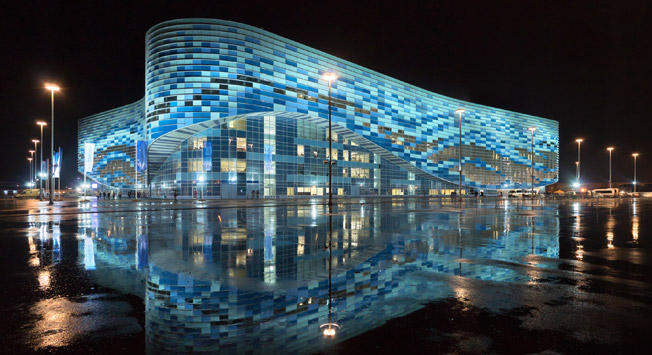 Lori, Legion Media
These are the venues in Sochi where you can view live broadcasts from the world’s most important sporting event.

Visitors to the city can watch the most entertaining events at the Olympiad even if they are a long way from the course or the stadia. Throughout the city Live Site Sochi 2014 venues will be opening their doors from 1 February 2014. On the initiative of the International Olympic Committee, this project was first launched at the Sidney games, then spread to Salt Lake City, Turin, Peking and Vancouver.

Live Site Sochi 2014 will host educational and sporting events during the morning, aimed mainly at children. Young fans can meet the 2014 Games mascots, watch cartoons and take part in fun relay races and competitions. When passions on the Olympic ski slopes and ice rinks have died down in the evening, the fun is just beginning. Well-known vocal and dance groups performing as part of the Marafon Regionov Rossii (Russian Regional Marathon) will set the mood. This project was set up several years ago by the ‘Sochi 2014’ organising committee with the aim of attracting the brightest stars in Russian national folklore to the Olympics.

Especially energetic visitors to Sochi Live 2014 will not want to pass up on the opportunity to take part in a variety of competitions. The winners will receive humorous Olympic souvenirs as a memento of Sochi. Visitors to Sochi Live 2014 will also have the opportunity to get autographs and converse with participants in the Sochi games. Many famous athletes will come to these venues after they have finished performing to thank the fans for their support.

Visitors to the city can find out about the cultural programme and the planned broadcasts at all the venues around the city via flyers, handed out on the streets by volunteers. These same volunteers will be able to tell visitors how to get to the nearest Sochi Live 2014 venue either on foot or by public transport.

These are the addresses of the Live Site Sochi 2014 venues:

Live Site Sochi 2014 venue, on the site of the Yuzhniy Mol in the Sochi Sea Port. This venue is located in the historic part of the city at the entrance to the central Primorskaya Naberezhnaya (Primorskaya Embankment).  Capacity: 5,000 people. Operating period: 1-23 February 2014. Opening hours: 10:00-23:00 Address: Sochi, Ul. Voykova 1

If you are tired of folk festivals and you need a rest, you can drift to a sports-bar. Here you can continue to watch the action in an atmosphere of sporting fervor over a glass of frothy beer.

One of these establishments can be found right in the centre of Sochi – in the ' Mariins Park Otel'  ( Sochi, per. Morskoy, 2 ).   This bar is open around the clock and has a very cosy atmosphere, and most importantly, three plasma screens. Several different types of beer are available as well as tea, freshly squeezed juices and coffee. For refreshments the bar offers hot and cold dishes as well as a Japanese menu. You can book a table in advance, by calling: 8 (8622) 69-30-44. This venue also houses a bookmaker.

Another bar in the centre of Sochi (address: Ulitsa Yana Fabritsiusa, 33/1 ) ‘ Bavarskiy Dvor ’ has three cosy rooms finished in the German style in which you can watch the competition. First and foremost this venue is known for its live beer, brewed in the bars’ own brewery. This bar is also worth a visit for the specialties prepared by the head chef. You probably wont partake of cooked or grilled shank, Bavarian sausage made from chopped pork or a large fillet with a forest berries sauce like it anywhere else. If you feel you want to continue with the banquet and you are suddenly drawn to Russian traditions, there is vodka on the menu, which would go well with lightly salted cucumbers or pork belly to which you can add salt yourself.

In  ‘Pivnoy baron’  on Tuapsinskaya, 7-V , you can limber yourself up between broadcasts, as the bar has billiard tables. The televisions in the bar are adequate for following a few of the competitions as they happen.

Another of Sochi’s sports-bars ‘ Hooligans ’ on Morskoy Pereulok, 10-A is a very inviting place, and not just in terms of its location. Fans of team sports come to Hooligans because of the large screen. The atmosphere is just as it should be: chants, whistles, and all the attributes for the entourage of fans. You are invited to enjoy the sports here and enjoy eastern and European cooking washed down with fresh beer.

If you stay in the Khostinsk district, welcome to the sports-bar ‘ Pelikan ’,  Sochi, Ul. Platanovaya, 6-a . You can bring a child here. The little ones are treated very well: surprises and an entertainment programme. There is another ‘Pelikan’ in the centre of Sochi on Moskovskaya, 18 . This is a small but cosy sports-bar.

If you want to watch the sports broadcasts ‘Russian style’ as it should be then pop into ‘Pervaya Rakovaya’. There are 2 in Adler: on Ulitsa Lenina, 22/1  and on Ulitsa Kirova, 17 . The Russian tradition of drinking beer with crayfish has been preserved from Soviet times. The crayfish is a small Russian lobster that lives in shallow tidal pools. It is cooked by boiling in lightly salted water with large sprigs of dill, until it turns red. The crayfish is the best traditional Russian hors-d’oeuvres to accompany beer. You can have cooked crayfish as a take-away and the same applies to live beer.

Sochi sport fans also love to congregate at ‘ Pivnaya Pinta ’ ( Sochi, Ul. Lenina, 4 ) and ‘ Pivnaya No. 1 ’ ( Sochi, Ul. Golubye Dali, 8 ). The local live beer is brewed in breweries in the Krasnodar and Stavropolsk regions, where the old traditions as well as the unique taste of a drink rich in hops has been retained. On the specials menu are: chicken wings with a honey and mustard dressing, shank, pork ears and small sausages prepared by the head chef. The bar has free wifi.

If you decide to spend some time in the thick of the sporting action in Yasnaya Polyana then you should go to the sports-bar ‘Gornaya Liga’ ( Sochi, Krasnaya Polyana, Esto-Sadok, Grand Otel Polyana ). Located in the pavilion in the lower station of the ‘Gazprom’ funicular railway. You can feel the sporting atmosphere here right at the doorstep. The interior is austere and laconic, and the home-made cooking is tasty. As is to be expected for a sports-bar, the menu includes beer with pork shank, Bavarian sausages, spare ribs and wings. There are also large, plasma screens.