An adventurous horseback ride into the past 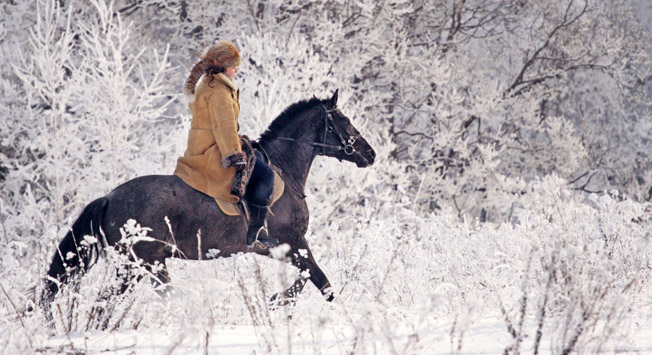 'Avanpost' press photo
A hundred horses with their riders perched proudly on top are ranked on the edge of a farm field. The autumn has arrived, and the crop has already been harvested. The ladies are wearing traditional riding dresses. The gentlemen are attired in warm frock coats and fur hats. At a signal from the chief of the hunting party, the rank of horses begins to advance slowly forward, combing the field to flush the quarry.

Then suddenly someone yells, “Hare!”

The ladies and gentlemen instantly forget about their highly decorous 19th century attire and break into a gallop. But the hare reaches the edge of a ravine in only three long leaps, and hides from view in tall grass.

For 18 years now the village of Isavitsy, Moscow Region, has been a magnet for those who love horse riding and active tourism. In 1996 Evgeny Matuzov, the chief of the hunting party and organizer of the whole enterprise, graduated from the zoological engineering faculty of the Russian Agrarian University. The subject of his graduation thesis was horses. His hobbies at the time included reenacting the battles of 1812, such as the Battle of Borodino, the largest and bloodiest single-day action of the French invasion of Russia during the Napoleonic Wars. For the Borodino reenactment events, Evgeny and four of his friends hired horses from a stable in a village outside Moscow.

“Those horses were right old hags, but they were better than nothing," Evgeny laughs. "We would dress up as lancers, mount our stallions, and arrive with a great deal of fanfare in Borodino to take part in cavalry action."

When Evgeny learned that the stable was being razed and the horses sent to the slaughterhouse, he and his fellow students collected about 40,000 dollars and bought the whole lot.

During the first year they lived with their horses in a stable in Mozhaysk, 70 miles west of Moscow. They lived, worked and slept right in the stable, which lacked even a proper roof at the time. They would sometime sleep on horse manure, for extra warmth.

Evgeny took out a loan, changed the subject of his graduation thesis, and proceeded to rescue single-handedly the Moscow Region’s horse-breeding industry. The venture started to make losses; keeping horses is not cheap, and at such a distance from Moscow, it was hard to attract visitors. There were several horse-riding schools in Moscow proper at the time, several horse-breeding farms in the neighboring towns and villages, and horse-riding tourist resorts thousands of miles from the Russian capital, in Bashkiria and the Altai mountains. Evgeny realized that in order to attract visitors, he needed to come up with something more than just horseback rides. He decided to try horseback hunting with greyhounds.

“Right from the start, my goal was not just to make money,” he explains. “I really wanted to make horseback hunting popular. We were building a ranch, but horseback rides alone were not enough to attract visitors. So we mounted an energetic and creative advertising campaign. We put our adverts on every wall in Moscow, and handed them out on the Moscow to Mozhaysk train. Eventually, the idea with hunting paid off big time.”

Evgeny is now the CEO of the Avanpost tourist ranch, which attracts more than 15,000 visitors every year. Up to 300 mounted riders take part in his hunting parties. He now explains the rules before the hunt begins.

“You must file yourselves in a rank along the edge of the field, and stay within one horse span of each other to make sure that the hare or the fox cannot slip between you. Your job is to comb the field, silently, riding at the same speed. Now, watch my hands!" Evgeny shows the gestures for Stop, Go, and other simple commands. He then orders the party to get going. The riders silently advance onto the field.

“Hunting with Greyhounds” is a seasonal attraction; the hunts take place only in the autumn and winter. From May to late autumn, Avanpost offers horseback trips lasting from a single day to two weeks. In summer the ranch hosts the Wild West festival, which is preceded by the most popular event of the year, the week-long Cowboy games. The participants are divided into squads of Indians, Cowboys, and Bandits. They set up their separate field camps and receive daily mission objectives from the organizers.

“I like to watch the novices who have never taken part in such games before,” Evgeny says. “At first, they barely even know how to approach their mounts. A week later, they become like twins with their horses. They eat together, drink together, run together, and even sleep under the same roof. They become inseparable from their horses. Once they are back in the city, many find it very difficult to settle back into their office routine. When they are here at the ranch, they can just let themselves go, and be who they really are."

Avangard is probably the only company in Russia that offers such retro-themed horse-riding and horse-hunting recreation. The organizers say their goal is to let their visitors immerse themselves in a different world, in which they don't just play somebody else's roles. Visitors are encouraged to open up their minds to the subconscious, and maybe even recall their previous lives as horse riders in a different era.

“Rest and recreation should not just boil down to lying belly-up on a sandy beach all day long," Evgeny says. “Rest is all about doing something new. It’s not about flying somewhere far away. The point is to be doing something during your vacation that you don’t normally do in your day-to-day life. That is how our brain reboots itself. And at every single one of our events, visitors have an opportunity to discover something new about themselves."

Mounted parties set off at 11 am, 2 pm, and 4 pm. No special gear or training is required. Visitors are advised to arrive 30 minutes early for a short induction course. The price of a week-long horseback trip varies depending on the season.

This article was first published in Russian by strana.ru