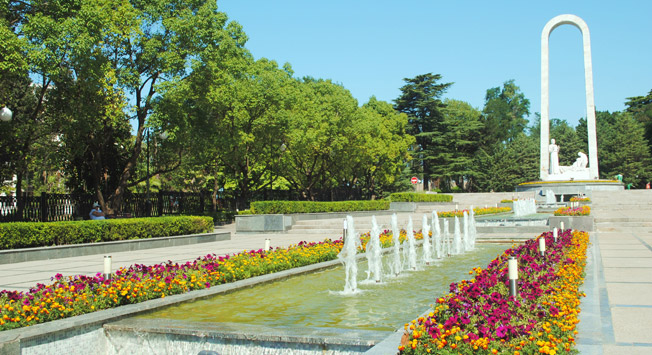 Lori, Legion Media
Next to the beautiful Riviera park, which is one of Sochi’s trademarks, is a monument to charity "A heroic deed in the name of life": a figure of a doctor and a nurse leaning over a wounded soldier. The city has a good tradition: a newly married couple after the official marriage ceremony lays flowers at his foot. This means that they will not sit down at the banquet before they pay tribute to those who saved the city in the hard wartime.

Reminders of the Sochi residents’ civil heroic deeds can be seen on memorial plaques at the main gates of almost all the city’s health centers – during the war they were all converted into hospitals. Health centers by the name of Dzerzhinsky, "Rainbow", "Metallurg", Grand Hotel and SPA "Rodina", "Coast", Maurice Thorez – there are a total of 111 hospitals in this list.

Soldiers were accepted even into the private sector: several homes were equipped with mobile hospital complexes in the Zavokzalni suburbs near Sochi. There were not always enough doctors and nurses, and Sochi residents themselves were helping the wounded. The famous slogan "Everything for the battlefront, everything for victory ", was relevant in the “non-military" Sochi as well.

The Sochi city cash office is still preserved in the same form as citizens saw it in wartime. Once, during an air raid, a bomb hit the main cash vault. The building was heavily damaged, and money was literally scattered on the surrounding streets with bright fireworks. Sochi residents were stuffing their pockets with bills, and then brought them back to the safe vault.

In Sochi, during the Great Patriotic War nearly half a million of soldiers and officers were recovering from battle wounds. For the city the war did not end in 1945, but a year later, when in 1946 the last soldier whose wounds had been healed, left the city.