One day in Sochi: must-sees of the Olympic capital 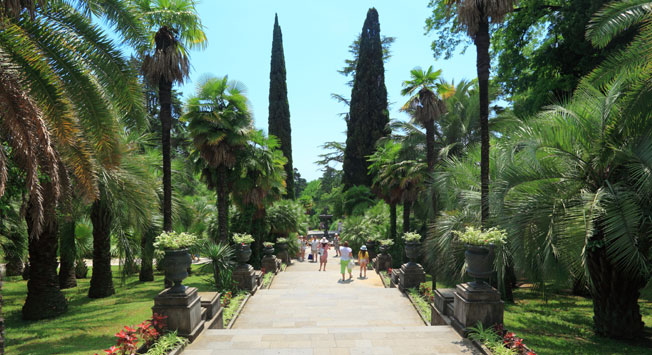 The ‘Riviera Park’(Sochi, ul. Yegorova, 1, www.park-riviera.ru)  is situated in the historical part of the city and is the favourite recreational area for residents of Sochi and tourists alike. You can spend the whole day here without even noticing where the time has gone. The park has attractions for children and adults, sports pitches, little restaurants, cafes, bistros, a hall of mirrors and the biggest Dolphinarium in Russia. The ‘Love Bench’, where Sochi residents meet for dates, is considered one of the sights of the Riviera Park. The ‘Peace Bench’ was put in place so that people close to each other can forgive each other without wasting time talking: the bench is designed in such a way that the aggrieved are brought closer together involuntarily. It is interesting to take a stroll along the avenue of artists, where works by Sochi artists depicting the sea as well as Caucasus landscapes are on sale.

The ‘Dendrariy Park’ (Dendrarium)(Sochi, Kurortniy Prospekt 74, www.dendrarium.ru)  is considered one of Sochi’s jewels, with a collection of rare and exotic plants that is famous throughout the world - more than 2,000 live specimens from all corners of the globe are to be found here. Cherry trees blossom here in the spring, while bananas ripen in autumn. Ostriches wander the passageways and white swans, pelicans and beavers swim in the pond. You can take the funicular railway from here and admire the view of the city. The ‘Dendrariy-GId’ a free mobile app guide has been developed especially for the Olympics, which works on Android and IOS. Visitors to the Dendrarium can now access all the information about the plants and animals they are interested in by scanning special plaques containing QR-codes with their mobiles.

Sochi’s sea wall   begins at the seaport and ends by the circus. On the way you can enjoy a bite to eat in a reasonably priced bistro. Music can be heard coming from almost every outlet, jazz in one café, rock and roll in another, while a third is playing Russian romantic songs or chansons. Sochi’s amateur walkers offer walks around the local Terrainkur, or the health path as it is otherwise known. The five-kilometre route along the local terrain from Matsesta to the Central stadium was developed back in Soviet times exclusively for health purposes to heal the body. This healing effect is not only felt on the body during the climbs and descents, but also on the surrounding flora and fauna. There are no wild flowers around the health path just wild blackberry bushes, walnut trees, palm trees, magnolias and the salty sea breeze – the majority of the route follows the coast. The entire walk takes around two hours even at a leisurely pace.

A visit to the seaport can become an interesting independent excursion in itself. Here you can look at the yachts that have been moored to the quayside up close and take photographs in the famous Rotunda pavilion on the shores of the Black Sea. The most important thing in this maritime ensemble of course is the seaport itself. A grand monument to federal architecture, it was constructed in Soviet times. The building is known for its 70 m tall tower with a spire and sculptures, which personify the four seasons and the four corners of the globe.  The shop ‘Bosco’ is located on the tower’s first level. Here you can purchase licenced Olympic merchandise, while the ‘Chaika’, one of the most famous restaurants in Sochi is to be found on the eastern side of the seaport. The small square with its deodar cedar, palm trees, rose garden and a beautiful fountain successfully round off Sochi seaport’s unified display. At the seaport you can purchase tickets to the buildings within the port and set off on an excursion in a catamaran or on the ‘Kometa’. Whatever you choose to do the effect will be the same – you are guaranteed fantastic views of the city and the snow-capped Caucasus Mountains in winter.

A walk around the sanatorium named after Ordzhonikidze , one of the oldest in Sochi, affords an opportunity to enjoy gothic architecture unusual for this area. This complex is an example of Italian Renaissance architecture. The majestic, palatial building with frescos and mouldings on the ceilings and surrounded by small shops, fountains, Terrainkurs and evergreen sub-tropical plants is an indescribable delight even today, when the majority of the sanatorium is closed for reconstruction. The sanatorium is often called a ‘palace in the Stalinist neo-classical style’.

Just a few metres away from the Kurortniy Prospekt you can find yourself in a quiet pine glade - in this glade is another architectural monument – the Villa Vera.  The first variant of this building was a wooden construction built in 1872 and belonged to a Moscow merchant and the patron Nikolai Mamontov. Some 30 years later the villa was rebuilt in stone. It was nationalised following the revolution and housed a hospital during the Great Patriotic War. In Soviet times films were made here. In spite of everything however the two floors and the attic, columns, little towers, balconies, arched vaults and gently sloping stairways have survived to this day – everything has been preserved here in its original form.

The ‘Tree of Friendship’ Museum Garden   is a unique corner of Sochi where you can walk in the dark shadow of fruit trees. There are a great many trees there – but one is very special. It is the same tree on which the Soviet plant-breeding scientist Fyodor Zorin made his first engrafting – he engrafted a mandarin ramulus into a wild lemon. Fyodor Mikhaylovich could not have imagined then that he had started a tradition that would spread to the whole city – that of leaving ‘living autographs’ as a symbol of friendship and of being at one with nature. Over the years many famous politicians, cosmonauts, scientists and artists have made engrafts here. Today on a single tree you can find 45 different sorts of citrus crop: Japanese mandarin, Italian lemons, American grapefruits, Spanish oranges, Chinese Kumquats. They all flower and bear fruit at different times of the year, which means the tree always looks wonderful, and why it is often referred to as the ‘Miracle tree’. There were a great number of people who wanted to leave an engrafting in remembrance of their visit and this became a big burden on the tree. Over the years a whole Garden of Friendship has grown up around the tree and more than 3,000 engrafts have been made in this garden.