The expat files: being a foreigner in Sochi 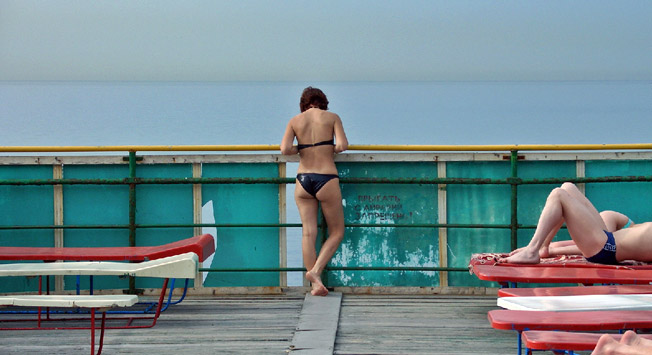 About Russia: I’ve been here for nine months now and still enjoying being here. Russia is a fantastic experience for me. Sochi is a small tourist resort with only a few of the local population who you tend to meet. Holidays and state occasions are very similar. I come from the northern part of England where we pride ourselves on hospitality, and this is the same here. Russians are so hospitable towards me. I thought everyone would treat a foreigner badly, but I haven’t met anyone who hasn’t helped me or smiled to me. Being the only English person here you feel lonely, but good Russian friends keep my spirits high. Crazy things: Traffic! Traffic! Traffic! There seems to be little or no regulation on how to drive. I use both a motorbike and a car and I’m amazed by how many accidents there are in Sochi.

Courtesy - in the UK it’s polite to open doors for others when passing through, but here they don’t! A normal two-lane road becomes four lanes. There doesn’t seem to be any police law on the roads - everyone chooses to ignore the police! They even drive behind them to get through traffic…

The local population dress differently; for some strange reason Russian men like to carry handbags, whereas in the UK it’s just for females.

Red Tape - it takes so long to do simple documents, even hiring a rental car takes so long. We have to have a stamp on every document, it’s very strange.

Parties: Great, partying and [going for] drinks is the best way to get to know both your work colleagues and the local population. I recommend visiting any local restaurants and bars. I’ve had many a good night drinking local vodka, wine and food. And many more to come! I have so many local friends here, this maybe because I’m the only English person in my office and everyone wants to practice their English with me.

Kitchen: I like most Russian food, I love “khachapuri”. I now cook many different foods compared to what I did back in the UK. I only cook for myself so it’s easy for me to make mistakes due to only me eating this food.

Strange Russians: It’s three years since me and my family came to Sochi. I can say that even if it was not easy in the beginning to communicate with locals because of language barriers and the local mentality, my family and I appreciate living here and the locals. Somehow, the Russian and French cultures are not too different. I just wonder why Russians sometimes make easy things complicated for no reason. And Russians often think that it’s better abroad than in their country. Maybe the fact that there is always something happening -a surprise, a problem, a solution, someone bothering you, someone else helping you… life is definitely not boring here.

Dinner party: As a Frenchman, I love spending time around the table with good food/drinks and nice people. In the beginning, I hated the speeches during parties (not because we had to drink every time but because I thought it was boring hearing the same kind of speeches all the time) but now I do appreciate some speeches (except those which are too formal and not natural).

Cooking: My wife learned how to cook “plov” and I love it!

Free time: I’ve done a lot of hiking in the canyons and to the various peaks like Achishkho and Psekhako. I’ve also spent nights camping in the mountains with local friends; it was a great feeling of freedom!

What to see and to do: No special place but there are many places to discover, different ambiences to feel in Sochi and around. When my brother visited me, we went for a Russian banya. When my mother visited me, we went to Sochi shopping, to the sea promenade and into the mountains (we also took a night train to Mineralnye Vody [in the Stavropol territory] and then the Elbrus mountain area for a weekend).

Must-see places: Caucasian/Georgian restaurants and the Caucasus Mountains, with their nice scenery. The first time I came here in September 2010, I went to the ski resort at 11:00 in the morning and enjoyed swimming before taking aperitifs on the beach in the evening!

Crazy story: My plane couldn’t land in Sochi, then we landed in Krasnodar. I didn’t speak Russian, and people were not friendly and helpful at all - I didn’t know what to do and where to go. I thought that [this was the] negative face of Russia and [about] cold Russians. And after that, two ladies, speaking English, took care of me, they invited me into their taxi, brought me to the train station, bought tickets, and bought food and drink that we enjoyed together in our old-style Russian train cabin all night. So the same day I also saw the positive face of welcoming, warm Russians.

Great thing about Russia: I really like Russian cars and their variations. Once I met a guy from the MChS (Russia’s EMERCOM serviÑe) in a sport shop, and we made a deal that I’d drive him to the center and he would show me the MChS car park! He did, I was happy.

Greeting: I like the friendly way Russians behave and that they always shake hands when they meet - so in the morning you have to shake the hand of all of your 55 friends from school.

Places to visit: Mainly I prefer training with the climbing club, or skating in one of the two skateparks in Sochi. So I recommend Zmeikovsky vodopad (a waterfall), Vysotskogo Polyana, and Orekhovsky vodopad (another waterfall). And I like all of the places near the Sochi River, especially above Plastunka and Chertovy Vrata near Khusta. Also Riviera Park, the 33 waterfalls, and the valley down the Akhun. I’ve tried canyoning, skiing, via ferrata, climbing, hiking, and rope free... The majority of the activities I did thanks to the “Masterskaya Prikluchenii” (Adventures Studio) agency.

Strange things: I came to Sochi as an international student. I thought that there would be a lot of international students but I was wrong - there were only two of us in the whole university. The second strange thing was the weather, 23 degrees in February? How could the Winter Olympics be held in Sochi? Another surprise was that it’s possible to buy alcohol only in the daytime (11:00-22:00).

When I leave I will miss: Petrol for €0.82 and my Russian girlfriend.

I am very interested in Russian culture, and I was quite interested to experience the Olympics. Interestingly, I find Sochi a bit disappointing, it seems to lack all of the great things that make a good resort town, not to mention being expensive! Strange things include what I call “metro face” (not smiling in public) and strange traditions like not handing someone money directly.

When I leave I will miss:  Russian vodka, black bread and salted fish. God, this was a real dream before I came - that and doing a banya with a bunch of Russians in the snow. Free time In my free time I go running, practice my Russian, and hit up cafes. I really miss all of the big city comforts though, like social clubs, etc. I even tried starting one but no success.

I strongly recommend visiting Cafe Stolovaya in Rosa Khutor, and Tulip Inn’s Amsterdam café is the place to go. Avoid the Radisson! And I’d like to show my friends how to pay for your ticket on the marshrutka (shared minibus taxi) by passing the money along. My favorite places are the Riviera walk and Rosa Khutor. There’s a great little café at the Teatralnaya bus stop, one of the best in town.

Strange things: Babushkas (old ladies) yelling at you in the street for not wearing enough warm clothes!

Crazy story: Spending five hours at the border into Abkhazia with border guards who were convinced my visa wasn’t real - it was - but at least they told good stories while they made me wait.