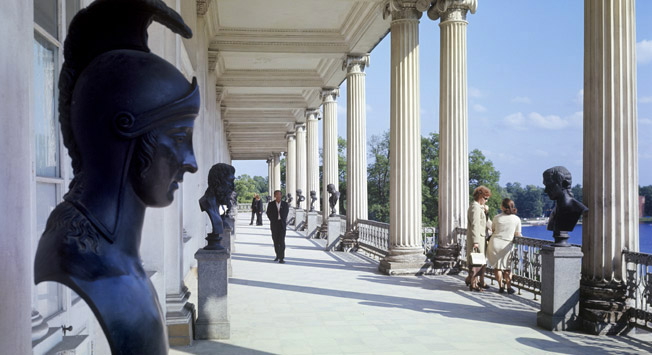 Ria Novosti, V. Manushin
The tax on domestic and public baths, introduced in 1704 by Peter I in order to raise funds to build the army and navy during the Great Northern War, made the list of the 10 most ridiculous taxes in the history of mankind. Clerks in the Boyar’s Council and merchants had to pay three rubles annually for the domestic bath-houses, simple noblemen, merchants and commoners had to pay one ruble, and the peasants, 15 cents. As historians tell, this idea was suggested to the Russian Emperor by Menshikov, who knew that the Russian people could not go without their bath-houses, since they’ve always gone to the bath-houses and always will, regardless of any imposition of taxes. Moreover, one’s attitude to the bath-house was a litmus test of one’s belonging to the nation: if a Russian man does not go to a bath-house, it arouses suspicion.

By visiting the suburbs of St. Petersburg, today one can become acquainted with the circumstances and traditions of the bath-houses of the XVIII-XIX century Russian royal court and gentry. On the grounds of the Tsarskoye Selo Park in the town of Pushkin there are three objects that truly reflect the topic: the pavilions of the “Upper” and “Lower” bath-houses (the latter in the XVIII century was called the “Cavalier’s Bath-house”), the thermae of the architect Cameron, located adjacent to the Catherine Palace, and the so-called “Cold Baths”.

In another palace suburb of St. Petersburg, Peterhof, the Mon Plaisir summer palace is situated in the Lower Park, to the eastern wing which adjoins the structure known as the “Bath-house”.

Traditional Bath-houses of the Northern Capital

Since the building of St. Petersburg began, the question was raised about the construction of bath-houses, or as they were called in Russia at that time “mylni” (soap-rooms). The first such places in the city were built on the banks of Neva along numerous rivers at the public’s expense. In 1720, thirty bath-houses had already been built just on the banks of the Moika. Later, bath-houses began to open in the central streets of the northern capital. Wealthy people built bath-houses in their homes, first with wood, and then later with stone, employing the services of renowned architects, including: Domenico Trezzini (the first architect of St. Petersburg), Sawa Chevakinsky (the impressive representative of Russian baroque), Francesco Rastrelli (the academician, and chief architect of the Empresses Anna and Elizabeth), Charles Cameron (the Scottish architect who Catherine II personally invited to Russia), among many others.

In the XVIII century, special therapeutic baths appeared in the city, where massages, bloodletting, leech therapy, enemas, and baths with infusions of various herbs took place. The bath-houses employed clerks, bath-house attendants, and laborers. In addition, beer, kvass, soap, washcloths, sheets, and raw eggs, for those who used them for shampooing, were offered in the bath-houses. In the case of one’s clothing being stolen in the public bath, the victim received compensation.

Not so long ago, after restorations were completed at Peterhof, a museum opened there allowing visitors to get acquainted with the traditions of the Russian royalty’s trips to the baths in the middle of the XVIII century.

The one-storey red brick Bath-house facility was built in 1866 by architect Eduard L. Hahn, known for his creations in the park ensembles of the southern part of the Gulf of Finland. The first part of the complex is a room, which was used by the wife of Emperor Alexander II, Maria, for her hydrotherapy procedures. The second part of the museum is a bath-house for chevaliers and ladies-in-waiting. In 1800, the complex was equipped to treat the poor health of the Empress Maria Feodorovna, wife of Paul I. In the XIX century, it was transformed into a bath-house for the male and female court members. Now visitors can view three areas: a rest room, steam room, and swimming pool. It first served, in addition to its obvious immediate purpose, as a place for treatments that were commonplace at the time, including bloodletting (a tray and knife intended for this procedure are on display in the museum).

The Imperial and Cavalier Bath-houses at Tsarskoye Selo

Catherine II, although German by birth, was very fond of the bath-house. According to her contemporaries, the Empress preferred not to steam alone but with her favorites in the court, and she loved to eat and drink in the bath-house.

Tsarskoye Selo traces its history to 1717, when 25 miles from St. Petersburg construction began on Catherine I’s “stone chambers”. The first palace was a small two-storey structure. For hygienic reasons, together with the wash-house, separate bath-houses were erected for the royal family and the gentry. In 1779, instead of continuing with the old wooden bath design, architect Ilya Neyelov built his bath-houses new stone building style of Early Classicism. On the banks of Mirror Pond, an “Upper Bath-house” was built for the Russian empress, where she could not only warm up, but also take a bath. Notice that the Russian word for “bath” (vanna), which comes from German Wanne, entered into Russian everyday life only during the reign of Catherine II.

The “Lower Bath-house”, or, as the inscription on the monument states, “XVIII century court swimming”, was built in 1779 by Neyelov, who was then Chief Architect at Tsarskoye Selo. Besides these pavilions, Ilya Vasilevich designed and built a Chinese Theater and Arena on Garden Street in Tsarskoye Selo, as well as a wing to the Grand Palace, which is located within the Lyceum, and other buildings.

The first room of XVIII century court bath-houses was the antechamber, followed by the cloakroom. Before elaborating any further here, it is appropriate to recall the history of underwear of the late XVIII - early XX centuries, which is on display in the museum. Generally, the Russian word for “lingerie” (bel’e) is derived from the adjective “white” (bely) and meant a white canvas or fabric. The word began to be used in the modern sense during the second half of the XVII century. The main articles of male and female underwear then were linen and cloth for commoners, and batiste and silk, decorated with lace or ribbon for the upper class. In those years it was believed that a lady of high society should wear only white underwear. The male gentry had much simpler and more limited scrim of finer fabric pants and underwear shirts.

After the cloakroom the male and female members of the gentry walked into the steam room or took a bath.

The walls in the steam were made from linden board, as well as the shelves and all utensils: small tubs, vats, and steamers. Besides birch, larch and fir were valued for making sauna switches. Good bath-houses iron cores and not stones to create stem because they retain heat longer and do not crack due to microscopic crystal dust. As for the bath tubs, tin “vessels” were originally installed in the pavilion. At some point they were later replaced by a bath tubs made from polished granite, which are on display today.

In the early 1770s Catherine II had the idea to recreate the atmosphere of ancient Rome at one of her favorite country residences, Tsarskoye Selo. Ten years later, this idea was realized in the magnificent architectural complex designed by Charles Cameron, who built the luxurious Roman baths, based on Emperor Constantine’s model, the same Roman emperor who made Christianity the dominant religion of the Roman Empire.

The construction site of the new complex was chosen close to the private apartments of the Empress and the wing, where the 22-year-old favorite of 60-year-old Catherine Earl Platon Alexandrovich Zubov lived. Cameron’s complex consists of several buildings: the bath room directly (cold bath), the agate rooms on the second floor, the magnificent antique gallery, which the Empress conceived for walks and philosophical conversations, and the hanging garden, connected to the upper rooms. The composition is completed by a ramp, which descends down from the second floor to Catherine Park.

According to the canons of Roman baths, Cameron included rooms for undressing, the storage of oils, exercise, hot baths, steam room, warm room with warm water and a cold bath. The architect decorated the interiors with stucco, painting, marble, jasper and sculptures.

To visit the above facilities, the easiest way is to use personal transportation, as there is no direct link between the cities of Pushkin and Peterhof, which are 46 kilometers apart. From Catherine Park in Pushkin one should follow along Park Street, which leads to Volkhonskoye highway, and continue straight on it to the junction with Highway Staropetergofsky.

To visit two such glorious museums on the same day by public transport, one must take two shuttles or two electric trains, but with a mandatory transfer in Petersburg. In the first case, the trip starts from the metro station Moskovskaya and then there is a transfer to Pushkin on bus number 286 or 299. When returning to St. Petersburg there is a transfer at Baltiisky Vokzal and then a bus transfer at Fontany Station in Peterhof by bus numbers 350, 351, 352.

From the Baltiisky Vokzal train, there are trains that go to New Peterhof Station. The journey takes 40 minutes. Trains to the town of Pushkin (Detskoye Selo Station) are sent from Vitebsk Station (Pushkinskaya Subway Station), which take 30 minutes to arrive.