The Cathedral of Archangel Michael: The Kremlin's royal shrine 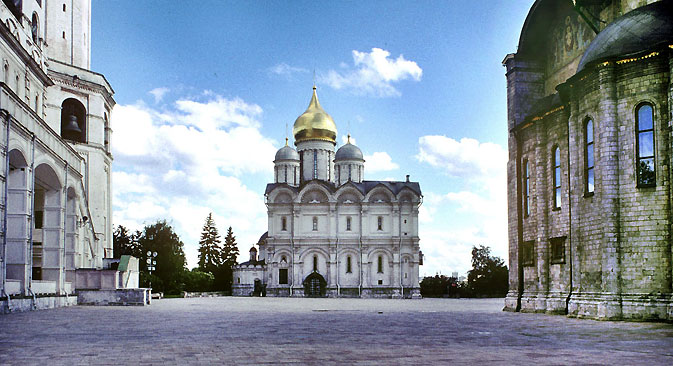 Take an in-depth look at one of the Moscow Kremlin’s most important landmarks.

Cathedral Square in the center of the Moscow Kremlin is one of the world's defining architectural ensembles, a group of buildings whose historical and cultural significance endures with each generation. Every monument in the Kremlin ensemble has its special role, but none is more prominent than the Cathedral of the Archangel Michael, the royal burial shrine.

As the supreme archangel, Michael was revered as the leader of the heavenly hosts and was usually portrayed holding a sword. The emblem of divine power, Archangel Michael was seen as the fitting protector of Muscovy's rulers.

The Archangel Cathedral was built in 1505-08 at the culmination of a construction campaign launched by Ivan III (the Great) in the 1470s. The cathedral replaced an earlier church of that name built in 1333 during the reign of Ivan Kalita. The site was especially prominent, on the southern flank of Cathedral Square overlooking the Moscow River.

The architect of the new cathedral was identified in Russian chronicles as Aleviz Novyi-Aleviz "the New," to distinguish him from the "Elder" Aleviz, who built the northwest Kremlin walls. His identity has recently been established (tentatively) as Alvise Lamberti da Montagnana, a student of Mauro Codussi in Venice. There are clear similarities between the architecture of late 15-century monuments in the Venetian area and the work of Aleviz in Moscow.

Aleviz was recruited during the ambassadorial mission of Dmitrii Ralev to Venice and other northern Italian cities in 1500. He arrived in Moscow in 1504 after completing a palace for the Crimean khan Mengli-Girei at Bakhchisarai. By the beginning of 1505, he was at work on the cathedral that would serve as the final resting place for Russia's grand princes and tsars until the time of Peter the Great, 200 years later.

The Cathedral of the Archangel Michael is located in Cathedral Square of the Moscow Kremlin in Russia between the Great Kremlin Palace and the Ivan the Great Bell Tower.

Italian features are also evident on the four intricately carved and painted limestone portals – three of which are on the west facade. The main portal is framed by frescoes on the theme of the Last Judgment and the acceptance of Christianity in Russia.

In its structure, however, the Archangel Cathedral represents a return to the traditional Russian cross-within-square plan in which the arms of the cross are delineated by interior aisles of greater width. The interior also has massive square piers typical of early cathedrals in Novgorod and Vladimir.

Even this archaic plan resembles in significant ways the design of Venetian monuments such as the Cathedral of St. Mark, which are also related to Byzantine architecture. The similarities are still more evident in comparison with the design of smaller Venetian churches during the Renaissance.

Since the time of its construction, the Archangel Cathedral has undergone significant modifications. These include the rebuilding of the roof, whose original form, in red and black tile, rested directly over the contours of the cathedral's barrel vaults. The present sheet metal roof overhangs the scallop-shell gables (zakomary) and obscures the pointed limestone ornaments (acroteria) that originally crowned the gables

Nonetheless, the carved limestone scallops--a Venetian motif much admired and imitated by subsequent Russian architects – remained intact. Their elaborate crown accentuates the cathedral's brick walls, which are divided into two tiers by a system of arches, pilasters, and cornices. The lower tier of the façades takes the form of a blind arcade rising from a sharply defined limestone base. The two levels are separated by a cornice resting on classical capitals. This unusual application of classical elements on the facades created a sculpted sense of architectural form.

The entablature of the upper tier isolates the scallop-shell gables and creates the impression of a large rectangular structure with a lavishly decorated roof. The contrast between the brick walls and the limestone decoration was originally intensified by the application of red paint directly over the brick--a feature lost in the eighteenth century when the walls were covered in stucco.

The rhythmic segmentation of the structure is intensified by the unusual number of bays on the north and south facades--five, of unequal size. The small fifth bay at the west end included a third floor with a special gallery for the wife of the grand prince and her suite.

The earliest paintings on the interior walls of the cathedral appeared in the late 16th century, during the reign of Ivan the Terrible. Only isolated fragments remain from the frescoes of that period. In their current form, the colorful wall paintings date from the mid-17th century (1652-66) and were done by a group of masters headed by Simon Ushakov, the best known Russian artist of that period. The west wall includes a particularly vivid Last Judgment.

In addition to religious subjects, the paintings depicted noted Russian rulers. For example, the massive piers included representations of Grand Prince Vladimir, Princess Olga, the martyred princes Boris and Gleb, as well as other figures from early medieval Rus. Along the lower level of the walls are imaginary "portraits" of a number of rulers buried in the cathedral.

On the east end is a grand icon screen that separates the main space of the cathedral from the altar. The current form of the iconostasis was created in 1679-1681, during the brief reign of Tsar Feodor III. The bottom row of the screen contains particularly valuable icons from an earlier period, including a depiction of Archangel Michael dated to 1399.

On first impression, the Archangel Cathedral interior can overwhelm with its exuberant display of painting. But careful, unhurried attention will be rewarded with insights into one of the profound monuments of medieval Russian culture.