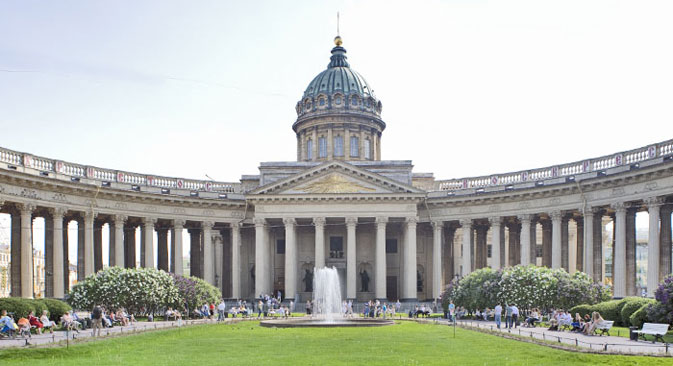 Situated on the city’s main thoroughfare, Nevsky Prospect, this iconic building and symbol of Russia’s northern capital was designed by a former serf.

Like the cathedrals of the Moscow Kremlin, St. Petersburg has its grand shrines to the nation's history. The first of these, the Cathedral of Sts. Peter and Paul, was initiated by Peter the Great himself in the early 18th century. Thereafter, it replaced the Kremlin's Archangel Cathedral as the burial place for Russia's royal family.

However, the Cathedral of Sts. Peter and Paul was located within a closely guarded fortress. For the first century of its existence, St. Petersburg lacked a generally accessible temple whose architecture would proclaim the luster of the imperial capital.

That need was met with the construction in 1801-1811 of the Cathedral of the Kazan Icon of the Virgin, prominently situated on Nevsky Prospekt, the city's main thoroughfare. Its location and design were carefully planned to command a vital space at the center of the city.

As early as the 1780s, there had been plans to rebuild Mikhail Zemtsov's modest Church of the Nativity of the Virgin on Nevsky Prospekt, the repository of the miraculous Kazan Icon of the Virgin. This icon, frequently copied, is one of the most venerated Russian images of Mary holding the infant Jesus and according to tradition originated after a fire in the city of Kazan in 1579.

The icon's national significance grew in the early 17th century, when it was believed to have played a role in Russia's salvation from the dynastic chaos known as the Time of Troubles. In 1721 Peter the Great brought one of the early copies of the Kazan Icon to his new capital of St. Petersburg.

An intensive phase in the building of St. Petersburg occurred during the brief reign of Paul I, from 1796 to 1801. Paul’s reign was a time of Russian initiatives in the Mediterranean. Paul was named Grand Master of the Maltese Order of the Knights of St. John, who had been driven from Malta by Napoleon in 1798.

The Kazan Cathedral is located in Kazanskaya Square in St. Petersburg.

Paul's idea of a rapprochement between Orthodoxy and Roman Catholicism seems to have influenced the design of the Cathedral of the Kazan Icon, whose decoration frequently displays the Maltese cross.

The cathedral's architect, Andrei Voronikhin (1759-1814), was born a serf on a Stroganov estate in the Urals. One of the richest families in Russia, the Stroganovs were astute patrons of the arts. Having recognized Voronikhin's talent, they brought him to Moscow in 1777, where he studied for two years with master architects Vasily Bazhenov and Matvei Kazakov.

In 1779 Voronikhin was drawn into the Stroganov circle in St. Petersburg and granted his freedom in 1786. He accompanied Count Alexander Stroganov's son Pavel on travels in Europe between 1786 and 1790. Before returning to Russia Voronikhin had private architectural training in Paris.

In 1799, Paul reopened the competition for a new cathedral, whose design was to reflect the grandeur of Rome. Alexander Stroganov headed the construction commission, which promptly chose Voronikhin as the architect. Although Voronikhin's qualifications were questioned, Stroganov's faith in "his" architect proved justified both in the organization of the vast construction project and in the magnificent eloquence of the design itself.

The body of the Kazan Cathedral is in the form of a Latin cross, with Corinthian porticoes on the west, north and south, and a semicircular apse on the east. The structure is surmounted by a large attic parapet. A sculpted frieze above the apse portrays the Entry of Christ into Jerusalem. The cathedral is crowned with a dome above a drum whose pilasters echo the rows of columns below.

The placement of the cathedral in relation to Nevsky Prospekt demanded an ingenious solution. Because the cathedral's main (east-west) axis parallels Nevsky, the architect created a grand north facade facing the boulevard, with a curved colonnade anchored by massive end blocks on the east and west. The original plan called for a matching colonnade on the south side, but it was never constructed. The main entrance, on the west façade, is tucked behind the north colonnade.

The brick walls of the structure are surfaced with Pudost stone, a limestone tufa obtained in nearby Gatchina. It is tractable when quarried, but hardens on exposure to air, thus providing an ideal substance for detailed sculpting. This quality was used in designing monumental friezes on Biblical subjects for the attics of the east and west end blocks, the apse, and sculpted panels for the three porticoes.

The exterior columns and capitals, arranged in ranks of four, are also of Pudost stone, with various details rendered in granite (three different types), limestone and marble. Bronze was used for statuary, including the Russian saints Vladimir and Alexander Nevsky by Stepan Pimenov on either side of the north portal. The massive doors are surfaced with bronze panels based on Lorenzo Ghiberti's designs for the Baptistery in Florence.

The magnificent interior is defined by a colonnade of 56 paired Corinthian columns that line the central nave and arms of the structure. The columns (35 feet tall) are of polished red Finnish granite with gilded bronze capitals. The barrel vaults display a web of hexagonal coffering with rosettes. The floor is a mosaic of stonework primarily quarried in the Ural Mountains.

The interior centers on the space beneath the dome. Massive pylons rise to the cylinder with depictions of the four Evangelists on the pendentives. The drum contains a painted gray frieze in imitation of sculpture (grisaille) depicting scenes from the life of Christ and Mary. The coffered dome consists of a double shell.

The Cathedral of Archangel Michael: The Kremlin's royal shrine

The painting of the interior was supervised by the Imperial Academy of the Arts and included works on canvas as well as on plaster. The icon screens were painted by prominent academic artists such as Vasily Borovikovsky and Andrei Ivanov, father of the renowned artist Alexander Ivanov.

By the time of its completion in 1811, the Kazan Cathedral had acquired the aura of a national shrine. Captured French trophies were placed there in 1812, and in July 1813 the cathedral witnessed the solemn burial of Prince Mikhail Golenishchev-Kutuzov, commander-in-chief of the Russian armies against Napoleon and hero of Leo Tolstoy's War and Peace.

The Kazan Cathedral belongs to a monumental style of classicism epitomized by St. Peter's in Rome and continued in Jacques Germain Soufflot's Sainte Geneviève in Paris (the Panthéon, built in 1755-1792). With its north colonnade, the cathedral design integrates architectural form and public space on a magnificent scale.

Finally, the Kazan Cathedral anchors Nevsky Prospekt at its crossing of the Catherine (now Griboedov) Canal. The landmark Singer Building, built across the boulevard in 1902-04, subsequently joined the cathedral is this role.

At the beginning of the 20th century, Voronikhin's masterpiece was complemented on the canal by another shrine, the Church of the Resurrection on the Blood, erected on the site of the assassination of Tsar Alexander II in 1881. These two shrines, built in such different styles and visible from one another, reflect the turbulent fate of the Romanov dynasty--and of Russia itself.