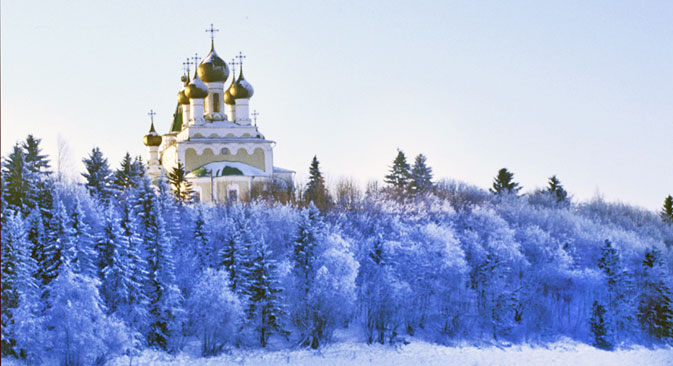 The arrival of an English ship in northern Russia in 1554 helped put Moscow on the map of Europe.

During the 16th and 17th centuries, the Northern Dvina River, which flows northward into the White Sea, was Russia’s main outlet to the west. The entire White Sea area, linked by rivers, lakes and the sea, formed one of the most powerful trading networks in Russia.

Until the 15th century, the Dvina area was considered part of the vast northern domains of the medieval commercial center of Novgorod. But by the end of the 15th century, Moscow's Grand Prince Ivan III (the Great) had subdued Novgorod and brought the Dvina River under the control of Muscovy.

In 1584, growing trade with western Europe led Ivan IV (the Terrible) to establish a settlement near the mouth of the Northern Dvina. Known as Arkhangelsk, after the nearby Monastery of the Archangel Michael. The new outpost soon became one of Russia's most important ports.

Yet there were far older places in the area. The most important of these was Kholmogory, located near the left bank of the Dvina about 50 miles south of contemporary Arkhangelsk.

As early as 1138, a document from Novgorod referred to the settlement of Ivani-Pogost on the site. The first mention of the name "Kolmogory" occurred in a 1335 document from the court of Moscow's grand prince Ivan Kalita, who also served as prince of Novgorod from 1328 to 1337.

Although Novgorod built a wooden fort at the turn of the 15th century to protect the strategic location, by the end of the century the entire territory had entered Moscow's domains.    During the 16th century Kolmogory (called "Kholmogory" by the end of the 17th century) was fated to play an important role in the opening of Russia to the west.

In 1553, the English King Edward VI granted a royal charter to the Company of Merchant Adventurers to New Lands to explore the area beyond the North Cape and investigate the possibility of a northeast passage to China.

In May 1553, three ships under the command of Sir Hugh Willoughby departed London, but two of the vessels were lost with all hands on the coast of Russian Lapland (now the Murmansk area) after discovering the inhospitable terrain of Novaya Zemlya.

However, Richard Chancellor, captain of the ship Edward Bonaventure, succeeded in making landfall in August 1553 not far from the St. Nicholas-Korelsky Monastery (now in the city of Severodvinsk on the south shore of the Dvina Bay near Arkhangelsk). Local inhabitants directed him to the mouth of the Dvina River, and from there to the settlement of Kholmogory.

In the meantime local authorities, having granted Chancellor full hospitality, sent riders with the news to Tsar Ivan IV (the Terrible) in Moscow. The tsar brought Chancellor to Moscow where he stayed until February 1554, showing him every courtesy and granted trading privileges to the English that lasted until 1698.

Kholmogory thus played a critical role in one of the first Western visits to Muscovy, a momentous event that was vividly described in Chancellor's account of the journey. Henceforth, Moscow found its place on the map of European consciousness.

Kholmogory is also known as the birthplace of the renowned Russian scientist and author Mikhail Lomonosov (1711-1765). And in the mid-18th century it served as a place of exile during Romanov family court intrigues.

Today, Kholmogory is officially designated a village, with some 4,000 inhabitants. Its historic architecture centers on an ensemble that originated in 1685, when Archbishop Afanasy initiated the construction of the Cathedral of the Transfiguration, completed in 1691.

At that time the Diocese of Kholmogory and Vaga stretched over an enormous territory, and the Transfiguration Cathedral became the largest brick structure north of Kargopol.

The cathedral ensemble contained a monumental free-standing bell tower (1681-83), as well as the chambers of the archbishop's court, whose windows were crowned with fanciful ornaments. The young Tsar Peter I visited the site in 1693 and commissioned an elaborate icon screen.

Additions include the small Church of the Twelve Apostles (ca. 1760) and the Church of the Pentecost (1865). In 1798, the ensemble was converted for use by the Convent of the Dormition, which had occupied several different sites over the centuries.

The Dormition Convent was closed in 1920, and during the Soviet period the ensemble fell into extreme disrepair. Restoration of the Transfiguration Cathedral began in 2010 in connection with the tercentenary of Lomonosov's birth, but funds are limited and a proper renovation will require many years.

Near Kholmogory is the village of Matigory, known for its Church of the Resurrection, picturesquely located on a bluff near the small Kurapolka River. Originally built by Fedor Stafurov in 1686-94, the church had additions in the 18th century, including a bell tower. The church interior is graced by a majestic icon screen that miraculously survived during the 20th century.

Complementing the historic monuments at Kholmogory and Matigory is the venerable Trinity-St. Antony Siisky Monastery, located near the west bank of the Dvina about 160 km south of Arkhangelsk. It was founded in 1520 by the monk Antony (1477-1556) on an island in Mikhailovskoe Lake, from which flows the small Siya River.

The monastery soon gained favor in the Muscovite court and subsequently became one of the most important spiritual and cultural centers in the Russian North. Among its treasures was a large manuscript collection.

A sign of the monastery's importance was the construction of the brick Trinity Cathedral in 1589-1606. Despite very difficult conditions, the cathedral was competently built and became one of the first large masonry structures in the distant north. In the mid-17th century the cathedral was complemented by the building of a large bell tower with its Chapel of the Three Prelates.

During the same period, the monastery gained other brick structures, including the Refectory Church of the Annunciation (1643) with its large dining hall.  In 1679-86 the Church of St. Sergius of Radonezh was erected at the main entrance gate.

Like the Kholmogory ensemble, the Trinity-St. Antony Siisky Monastery was closed in 1920. During the late Soviet period the monastery served as a summer resort and its buildings were poorly maintained.

In 1992 the monastery island was returned to the church, and the gradual process of restoration began. Today the monastery again serves as a flourishing center for the Russian Orthodox Church.