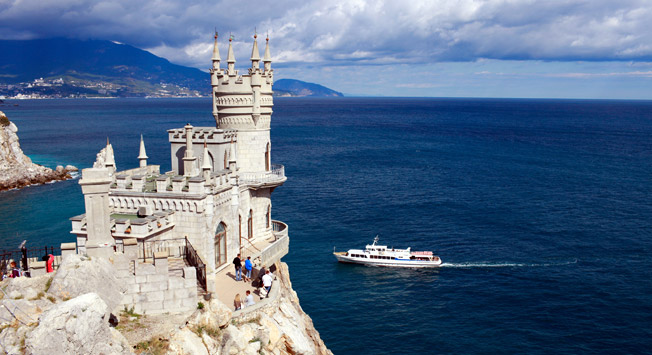 Lori, Legion Media
While on vacation in the Crimea, they would spend days, months and years here. The Russian writer Leo Tolstoy wanted to be buried here, the legendary opera singer Feodor Chaliapin worked on his autobiography in his Crimean Manor, and the seascape painter Aivazovsky, the hero of the Sotheby's auction, painted his famous landscapes on the terrace of his house. The last Russian emperor admired the Crimean palaces. RBTH presents a guide mostly for Crimea’s man-made attractions and real architectural gems that are strewn about the Black Sea coast.

The residence was built after the Russian–Turkish war of the late 19th century for a retired Russian general whose name was not preserved in the history. However, the building itself, was named “Castle of Love" by its first owner, became immortalized in the paintings of Ivan Aivazovsky and on photographs of the time.

Since then, the construction on Mount Avrorina has changed its owners several times – it was owned by the family of the court physician, then – a Moscow merchant's wife Rachmaninova. She demolished the original wooden structure and replaced it with a castle, also made of wood. Rachmaninova was the one who gave the castle its present name – "Swallow's Nest.”

The last owner of “Swallow’s Nest", an oil industrialist Steinheil holds the credit for its medieval courtly architecture which is preserved to this day. A miniature Gothic castle, built above a 40-meter cliff became Crimea’s s future symbol – it was rebuilt in 1912. Only a living room could fit inside the building, and the stairs leading to two bedrooms, are located in a two-story tower.

At the beginning of the First World War, Baron Steinheil went to Germany, and sold the "Swallow's Nest” castle to a Moscow merchant, who opened a restaurant there. After his death, the restaurant was closed. After a 9-magnitude earthquake in 1927 the castle was declared dangerous and was closed for 40 years. In the restored “Swallow’s Nest “a restaurant was open again.

The castle is located near the village of Gaspra, near Yalta.

One of the most luxurious residences of Crimea, the Livadia Palace is the last building erected in the Russian Empire for the royal family.

An elongated white building with an abundance of arched apertures in the Italian style, it was built in 1911. The author of the project was the Crimean architect Nikolai Krasnov; according to some sources, Emperor Nicholas II spent about 4 million prerevolutionary gold rubles on the construction (for comparison – the average civil servant in 1911 received an annual salary of 4,000 rubles, that is 1,000 times less). In 1993, the Livadia Palace was awarded the status of a museum.

The palace is located in the village of Livadia, 3 kilometers from the city of Yalta.

A medieval palace with beautiful crenellated towers, with the ivy twined around it, and a facade in Gothic style, was built in the first half of the XIX century; it belonged to the noble old Russian family of Prince Golitsyn.

The building was designed by the famous modernist architect Fyodor Shechtel. From the Golitsyns, the palace in Gaspra was transferred to the Kochubeev noble family, and then – to the heiress of one of the richest families – Sophia Panina. The Russian writer Leo Tolstoy associated two years of his life with her name and this palace. During his stay in Gaspra, the writer had such visitors as Chekhov, Gorky, Kuprin and Chaliapin.

In his last trip to Gaspra Tolstoy caught a cold: in the midst of his illness, he felt so bad that his doctors had given up all hope of his recovery. Leo Tolstoy did not want to cause anyone any trouble with his body, and wished to hold his burial in the Crimea, for which he bought a small plot of land adjacent to the estate. However, Tolstoy recovered and lived another 8 years.

The palace is located in the village of Gaspra. Currently, there is a children's sanatorium “Yasnaya Polyana”, and on the first floor there is an exposition dedicated to the writer.

The palace in Neo-Romanesque style with elements of the Renaissance was built by the Crimean architect Nikolay Krasnov for Prince Felix Yusupov, the former Governor-General of Moscow. The last reconstruction was led by the same Nikolai Krasnov; Yusupov Jr., (Felix’s heir known as the accomplice in the murder of Grigory Rasputin) was left unhappy with the estate’s view, he spoke of it as of an ugly building with gray walls, not appropriate for the seashore.

Sculptures of lions, marble mythological characters of ancient Greece brought from Venice, decorate the arches and the staircases. The interior is dominated by the modernist style.

The founder of the Yusupov Palace was gardener Carl Kebahom, famous at the time. The park covers an area of 16.5 hectares, on which 7,500 plants – ornamental trees and shrubs are located.

The palace is located in the village Koreiz .

The palace built in the style of Louis XIII soon lost it's master. The author of the project was a French architect Etienne Bouchard, who worked for a wealthy noble family representative Prince Semen Vorontsov. However, the future owner never saw the embodied project – due to Vorontsov’s death in 1882, the construction was suspended. 7 years later the estate was bought for the Emperor Alexander III. The palace’s construction was completed in 3 years, however, the Emperor could not live here either – he died in 1894, and the estate passed to Nicholas II.

In the 30s of the XX century, the palace became a sanatorium called "Proletarian health." After WWII state dacha "Stalinskaya" was located here, where Stalin, Khrushchev and later Brezhnev would stay.

The palace is located in the village of Verkhniaya Massandra.

The palace was built in the mid 19th century for the Governor-General of New Russia Mikhail Vorontsov. The author of the project was Queen Victoria’s court architect Edward Blore – the famous Buckingham Palace of London was erected with his participation, as well as the Sir Walter Scott's castle in Scotland. The palace’s South facade, facing the sea, is built in the Moorish style, and is somewhat reminiscent of the famous Alhambra Palace of the Arab rulers of Spain in Granada, built in the late 14th century.

On the border of the façade’s deep niches the stylized Arabic inscription is repeated six times; it is the motto of the Grenada caliphs: "There is no victor but Allah!" The "Lion Terrace" is located in front of the palace, which descends from the monumental staircase with three pairs of white marble lions. The vigilant lions over the upper stairs imitate Antonio Canova’ lions from the tomb of Pope Clement XII in Rome.

The rear facade of the palace and its western part is a romantic architectural variation on the theme of "style Tudor" of the XVI – early XVII centuries. There are about 150 rooms including barns, in the building’s palace complex.

At present, the palace is a museum. Vorontsov Palace is located in Alupka.

In the mid 19th century, the tea and porcelain King Count Alexander Kuznetsov acquired the mansion in Foros – the Kuznetsov couple suffered from tuberculosis and were forced to live in the Crimea.The Kuznetsov palace was built in the style of Russian classicism, with it's characteristic simplicity and rigor of forms. The austere beauty of the Kuznetsov’s mansion is emphasized by the parks’s natural luxury. There are more than 200 species and forms of trees and shrubs gathered here, not only characteristic of the Crimea, but also exotic ones: palm trees, magnolias, redwoods, cedars, pines, stone pine, cypress , and fir. The "paradise” with a picturesque cascade of six small lakes is particularly noteworthy.

After Kuznetsov’s death, the estate became the property of industrialist Ushakov. In 1916, in his house, writer Alexei Gorky and singer Feodor Chaliapin were working on an autobiographical book about Chaliapin "Pages from my life" for six weeks.

To date, the palace is a building of the sanatorium in Foros.

The seascape painter Ilya Aivazovsky’s National Art Gallery is located in the town of Feodosia. It was the first one artist – museum in the territory of the Russian Empire.

After Ivan Aivazovsky’s death in 1900, the Gallery, according to his will, was assigned to the artist’s hometown. The gallery is a collection of nearly 12,000 works on the marine themes, it has the world's largest collection of works by Aivazovsky (417 works).

Aivazovsky’s Gallery is located in the town of Feodosia (2, 4 Galereynaya Ulitsa).