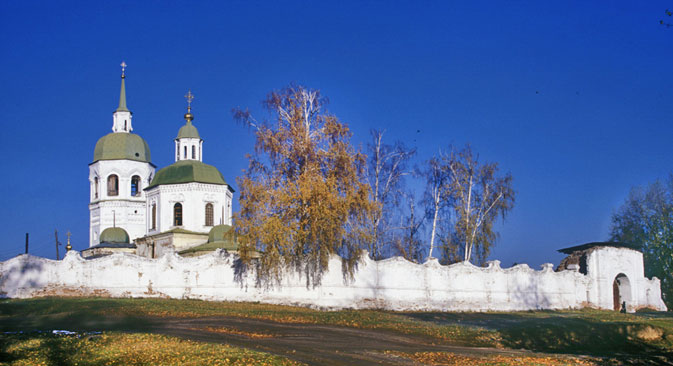 The history of Yeniseisk covers fur trappers, Old Believers and exiles of all stripes.

From west to east Siberia is marked by three of the northern hemisphere’s greatest rivers: the Ob, the Yenisei and the Lena. During the Russian move east towards the Pacific in the early 17th century, the great challenge after the Ob River basin was reaching the Yenisei River.

Together with its tributaries, the Yenisei not only opened a territory of unfathomable natural wealth, but also raised the possibility of expanded trade with China.

As usual in the conquest of Siberia, the earliest land route was the most northerly, such as that from the fur-trapping haven of Mangazei, founded in 1601 on the Taz Bay (northeast of the mouth of the Ob).

Yet reaching the Yenisei by this means tested the endurance even of the sturdy northerners from the White Sea area, the Pomors, who formed the early scouting and trading parties. Long treks through tundra -- inhospitable at any time of year — sapped body and soul.

A more southerly route led from the Ob River along the Ket almost due east toward the Yenisei. The Yenisei was not the only prize: the Angara tributary and the Lena River farther to the east were equally important in terms of access to fur pelts and other resources.

Therefore, the logical site for a strategic outpost was slightly to the north of the confluence of the Yenisei and Angara. In summer 1619, a group of servicemen and Cossacks from Tobolsk founded a settlement on the left bank of the Yenisei, on a rise near the entry of the small Kem River into the Yenisei.

To get to Yeniseisk take the local bus from the Krasnoyarsk main autostation (departure every 30 min.; travel time - 7 hours).

The geographic importance of the site led to Moscow’s appointment of a voevoda (a regional authority) for the new settlement in 1623, which henceforth became the administrative center for the boundless territory beyond the Yenisei River.

In this capacity the town served as a transit point for an increasing number of exiles, including Archpriest Avvakum, the spiritual leader of the Old Believers. Indeed, Yeniseisk served as a place of exile well into the 20th century.

The Yeniseisk fort launched a number of exploration parties into eastern SIberia. Among the explorers was Semyon Dezhnev, a Yeniseisk Cossack sent to remote Yakutsk in 1638. He subsequently led a group that is thought to have sailed through the strait between Russia and North America in 1648, 60 years before Vitus Bering.

A major flood in 1647 destroyed the Yeniseisk fort, but efforts were soon taken to revive it. By 1651, the log walls and buildings had been reconstructed on a larger scale by the ruthless voevoda Afanasii Pashkov, who was described by Avvakum in his remarkable autobiography.

For another century Yeniseisk thrived as a Siberian trading center. Important components of commerce included valuable sable furs (known as black gold) as well as fish from the regions abundant rivers.

The Dormition fair, held annually in August, attracted merchants from the most distant reaches of Muscovy, and as early as 1674 a group of 43 merchants made their way from Yeniseisk via Kiakhta to Peking as an unofficial trade delegation.

By the early 18th century, the population of Yeniseisk had reached 4,500, an impressive size for so distant a settlement. Yet it was almost entirely built of wood, which made it prey to fires – such as the one that destroyed much of the town in 1729.

Attempts to increase building in brick were hampered by the dearth of qualified masons in Siberia. Nonetheless, modest brick buildings were soon joined by churches.

Among the earliest brick churches was the Cathedral of the Epiphany, begun in the 1730s and slowly constructed with attached chapels for the next three decades. Like most of the churches of Yeniseisk, the Epiphany Cathedral suffered major damage during the Soviet period.

Its central space was almost completely dismantled during the conversion of the building to a workshop and boiler space, with mounds of coal banked against the walls of this landmark.

The cathedral was joined in the mid 18th century by the Church of the Resurrection, supported by wealthy merchants. Its main structure still stands, profusely decorated with ornamental brick strips.

A particularly important role in local culture was played by the Monastery of the Transfiguration of the Savior, one of the oldest monastic institutions in Siberia. Founded in 1642, it established the area’s first formal school in the early 18th century.

In 1740, merchant donations allowed the rebuilding in brick of the monastery’s main Church of the Transfiguration, completed in the 1750s with flanking chapels on north and south.  Although not large, its position on a small rise creates a strong vertical form, echoed by a bell tower at the west end. The restored church is now a central part of the monastery’s revival.

At the end of the 18th century, the Transfiguration Monastery gained other brick structures, including the graceful Gate Church of Sts. Zacharius and Elizabeth (1786-96; for the most part destroyed but now being rebuilt). An effective frame for the monastery was provided by the construction of a brick wall (1789-1806) with a beautiful and unusual undulating east range.

Near the Transfiguration Monastery is the Church of the Dormition, begun in 1793 with chapels added in the early 19th century. Relatively well preserved, it now serves as the town cathedral. Much less fortunate was the Trinity Church, whose entire upper structure was demolished and the ground floor converted to a shed. The remarkable west portal has just managed to survive.

Much of the distinctive church architecture of Yeniseisk was razed during the Soviet period and is now visible only in archival photographs. Among the lost monuments is the historic Convent of the Nativity of the Savior, founded perhaps as early as the 1620s and rededicated in the 1870s to the Iveron Icon of the Virgin. The convent is now being revived, with the inclusion of the nearby Church of the Resurrection.

The Vaga River: Into the heart of the North

In addition to its surviving churches, the heritage of Yeniseisk is also reflected in a number of lovely wooden houses with traditional decorative window surrounds. Their preservation is fortunate. The harmonious scale and charming architecture of the town’s central neighborhoods have led to a modest tourist revival.

Although Yeniseisk experienced an economic surge with the discovery of gold deposits in the 1840s, gold prospecting had waned by the end of the 1860s. During the Russian civil war, the town suffered greatly from prolonged fighting between Bolshevik and White forces in 1919.

Today Yeniseisk has some 18,000 inhabitants. In addition to its role as a regional administrative center with a teacher’s college, the town is supported by the forest products industry and a satellite tracking station. Fishing remains a favored occupation. Anyone invited to dinner will likely taste some of Siberia’s freshest, most delicious fish.

Located 200 miles north of the territorial capital Krasnoyarsk, historic Yeniseisk is accessible by a highway that passes through lyrically beautiful countryside. And, of course, the town’s view of the mighty Yenisei River is nothing short of breathtaking.