Crimea at the crossroads of great civilizations 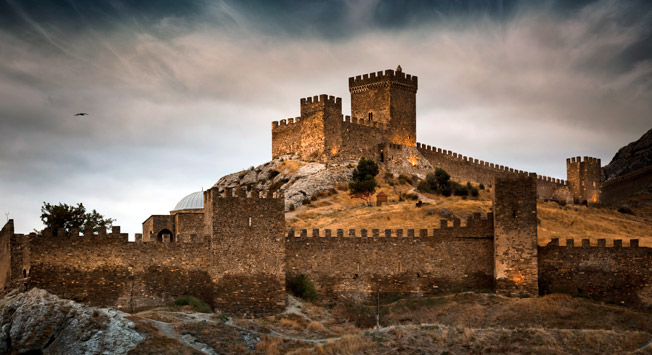 Dmitry Mordvintsev, Getty Images
You may not have heard of Crimea before this year. The unceasingly bad news about international tension and the peninsula’s annexation (or unification) obscures the most significant historical point about Crimea: It is a timeless, glittering jewel.

“Russia needs its paradise,” said Grigory Potemkin, longtime lover of Empress Katerina, or Catherine the Great, about Crimea. Russia has never left Crimea. No matter where you are on the political divide, you should see its splendor itself and socialize with its people.

The time to go to Crimea is—soon, from early spring through late fall. A tour includes low-rise stucco villages, ancient ruins, calm waters, splendid beach and fortress castles perched on rocks jutting out to sea. And if you like the wines of Southern Europe, the Massandra Winery was built for last Tsar.

The must-see routes include cave cities from its Christian pasts to minarets of the Ottoman Sultans.

Today, Crimea’s ancient beauty and heritage is best seen in the much-talked about-city of Sevastopol. Chersonesus, an ancient city recently excavated is a must-see on the fringe of the city on the coast of the Black Sea. A labyrinth of precious and heroic ruins, Chersonesus is on UNESCO's World Heritage List.

Here in Sevastopol one can find a warm version of Sr. Petersburg, with neo-calssical buildings jutting right on the water. Tourists can walk along narrow stone alleys and white stone columns of medieval churches, as well as wander on the beach.

Crimea is surprisingly mountainous; they are not that high, but impressive nonetheless, with a ridge along the coastline, which helps Crimea retain its warmth, creating a “hotbed” effect. The primary natural formation is the spectacular Iphigenia Cliff on the southern coast of Crimea (near Beregovoye village). It is a fragment of an ancient volcano that is mentioned in ancient Greek myths and Homer's "Iliad."

In the first century the Romans built the Charax fortress to gain a foothold in Crimea. It was also in this era that Christianity spread across the peninsula. One of the most interesting remains the Romans left in Crimea is a road called the Legionnaires Path.

In Balaklava, which is still part of Sevastopol, there are excavations of a Roman temple, with altars with inscriptions addressed to the gods Jupiter, Hercules and Vulcan. In the 3rd century the Crimean steppes were invaded by the Central Asian nomadic Huns, and the mountainous region of the peninsula fell under the rule of the ancient Germanic Goths. u, the only surviving ancient city, became an outpost of Byzantine influence on the peninsula. The Byzantine Emperor Justinian revived the city of Bosporus and founded the Sudak, Symbolon, and Gurzuf fortresses in Crimea. The latter, by the way, was admired by the famous Russian poet Alexander Pushkin, who noted the "Colorful radiance of the mountains, clear blue sky, and brilliance of the midday air." At the beginning of the 8th century, Byzantium shared the peninsula with the ancient Turk Khazar Khanate, adding the Jewish Krymchak and Karaite ethnic groups to the already multiethnic Crimea.

The Crimean mountains were an obstacle for the Hun riders that prevented them from taking the whole peninsula. The local people erected fortified cave cities to escape from the nomads, and many of the cities lasted up until the 18th century. Today there are many routes in Crimea from which caves, temples, wells, houses, stairs and entire streets carved directly into the limestone can be seen.

The best preserved of them is Chufut Kale,or fortress, which was founded in the 6th century. Over the centuries this city was occupied by Tatars, Ottomans, Christians, and finally, the Jewish Karaite people. Here there are the defensive structures of the fortress, the mausoleum of Khan Tokhtamysh's daughter, an underground gallery 80 meters long, a 30-meter deep well, the remains of an ancient mosque, several houses, the ancient Karaite cemetery and a sacred oak grove. Not far from Chufut Kale is the Holy Dormition Monastery, which is one of the oldest in Crimea (founded in the 7th century). It consists of five churches, chapels, and many monastic buildings that are all carved into the mountain.

Another cave monastery is Chelter Koba, which was founded by icon-venerating monks who were fleeing from Byzantine. The refectory, cells, and warehouses are carved right into the side of a cliff, and the main shrine of the monastery is located in a karst cave. It is the largest cave church in Crimea.

The ancient settlement of Tepe Kermen is located on the eponymous mountain buttes. Here more than 250 caves were carved into the mountain to be used for everything from stables for livestock to lookout towers. Not far away is Kachi Kalon, a monastery that existed for more than 1,000 years. Another cave monastery is Shuldan, built on a rocky cliff near the village of Ternovka. Besides churches, huge wine-press rooms are located here.

The baptism of Rus

In the 9th century Cyril, the creator of the Cyrillic alphabet, arrived in Crimea. At that time the Slavic Rus tribes also appeared on the peninsula. It was here that Rus Prince Vladimir was baptized. The end of Russian dominance in Crimea came with the arrival of the Polovtsev (12th century), whose language is a forerunner to the modern Crimean Tatar language. Then the peninsula was occupied by the Tatar Mongols and Islam spread across Crimea. In 1475 the Ottomans turned the Crimean Khanate into a protectorate of the Ottoman Empire, which lasted for three centuries until the victory of Russia in the Russian-Turkish War (1768-1774) put an end to the domination of the Ottoman Turks and their claims to Crimea. The peninsula became part of the Russian Empire. Much of this rich history is still evident in the architecture, churches, mosques and ruins.

One of the most remarkable sights of Crimea is the Ottoman-era city of Bakhchisarai (Garden city), the ancient capital of the Khans. The Fountain of Tears, which was immortalized by Pushkin, is located in the main palace of Bakhchisarai, as well as the Golden Fountain, the Fountain of Spirits, and harem rooms. In addition, there is the large 9th-century khan mosque, the khan cemetery, the 18th-century mausoleum of the beloved wife of Khan Krym Girey, the Falcon Tower, and the Museum of Art.

Whether you believe Crimea has been unified with Russia or annexed, one thing is for certain. Crimea is an ancient crossroads of multiple civilizations and a place of historical significance as well as spectacular beauty.