Riding the rails between the future and the past 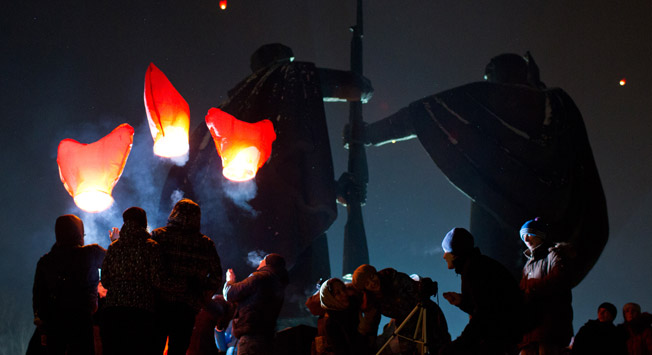 RIA Novosti
The city of Tomsk in central Russia is a striking combination of the old and new. In 2004, Tomsk celebrated its four-hundred-year anniversary making it one of Siberia’s oldest cities.

Tomsk also has one of Siberia’s youngest populations. Six major universities, including the Tomsk State University and the Tomsk Polytechnic University are located here, and twenty percent of Tomsk’s population are students. The streets of Tomsk contain some of Siberia’s oldest buildings, and the contrast between the faded architecture and the youthful students creates a powerful juxtaposition between the past and present.

Tomsk was first established in 1604 when a band of Cossacks was sent to build a fort on the Tom River. The settlement grew into the city of Tomsk which enjoyed a brief period of prestige as Russia’s most easterly border town.

As Russian explorers continued annexing parts of Siberia further east, Tomsk’s importance waned until the Sibirsky Trakt, also known as the Post Road, was built through Tomsk in the mid-18th century. Caravans laden with goods from the Far East traveled west along the Trakt towards Moscow. Tomsk boomed because of its location on the Trakt, and many of the city’s most beautiful churches and historic buildings were constructed during the age of the caravan.

In 1804, Tomsk became the administrative capital of the surrounding region, including the cities of Krasnoyarsk and Kemerovo. The discovery of gold outside Tomsk brought the city even more prosperity. In 1878, by order of Tsar Alexander II, Tomsk State University was founded and became Siberia’s first university. Other universities sprung up in Tomsk, and today the city is nicknamed the ‘Siberian Athens.’

Tomsk fell off the map again by the end of the 19th century, when the Trans-Siberian Railroad was routed through Novonikolaevsk, the town which became Russia’s third-largest city Novosibirsk, instead of Tomsk. During the Second World War, most of the factories in western Russia were moved to Siberian cities, including Tomsk. The rebuilding of Tomsk as an industrial center was a boon for the city, and the discovery of oil in the surrounding countryside during the 1960s got Tomsk’s economy rolling again.

While many places in Siberia experience a brain drain as young people leave for the economic potential in Europe, Tomsk has witnessed a slight population increase over the last decade. Today, this city of half a million is one of Russia’s intellectual capitals and makes for a great stop on the long train journey between the cities of Novosibirsk and Irkutsk.

Most of Tomsk’s main points of interest are found on the streets that follow the Tom River north to south. Start a walking tour of Tomsk at the southern end of town by exploring the grounds of the universities to get a glimpse of the city’s student life. While you’re there, take a stroll in nearby Lagerny Sad, a large park along the Tom River tucked away from the bustle of the universities. The park is located at the southern end Pr. Lenina, the city’s main drag.

If you want to learn more about the infamous Gulag labor camps that once sprouted up in Siberia, stop in at the Oppression Museum (44 Pr. Lenina), a former detention center managed by the NKVD—the Soviet secret police. Visitors here can take a chilling tour through the repressive times of the Stalinist days and even walk through cells where prisoners in Tomsk were once held.

From the Oppression Museum, take a peak in the Atashev Palace (Pr. Lenina 75) a former church turned home of a local businessman during Tomsk’s gold rush. The streets near the palace are some of the best places to view the city’s ornate wooden architecture. The first Siberian cities, most notably Tomsk, Tyumen, and Tobolsk, were all built from wood. Fires in each of these cities destroyed most of the historic buildings and they were eventually rebuilt from stone. Tomsk is home to some of the best-preserved wooden buildings in Siberia. The streets of Tatarskaya, Gagarina, and Krasnoarmeyskaya, located near the Atashev Palace, have some of the best examples.

Your next stop should be Ploshad Lenina, the city’s main square. Stop at the Epiphany Cathedral, constructed in 1784, and head west to the riverfront to see the Chekhov statue. While traveling across Russia, playwright Anton Chekhov stopped in Tomsk and described the city as ‘boring.’ The Tomsk statue of Chekhov portrays a parody of the famous Russian literary figure as a washed-up man with large feet viewed from the perspective of a drunk.

End your tour with a walk up Resurrection Hill northeast of Lenin Square where the original Tomsk fort was built. At the top, you’ll find a Catholic Church and the city’s History Museum which features a lookout tower.

Tomsk is also home to Europe’s most easterly football club FC Tom Tomsk. From their remote Siberian base in Tomsk’s Trud Stadium (15/1 Ul. Belinskogo), the team travels thousands of kilometers away to face off against other clubs in the Premier League. Watching Siberia’s best football club play a match is one of the highlights of a visit to Tomsk.

Other entertainment options include the city’s Philharmonic Orchestra (12a Ul. Lenina), the Aelita Theater (78 Pr. Lenina) for plays and concerts, and the Tomsk Drama Theater (4 Pr. Lenina).

Sayan Ring Travel Company, based in nearby Krasnoyarsk, can help book tours of Tomsk and the surrounding region. Prices vary depending on group size and length, but expect to pay between $40-125 per person for tours with a group of five people.