Izhma village: Enclave of tradition at the edge of Arkhangelsk 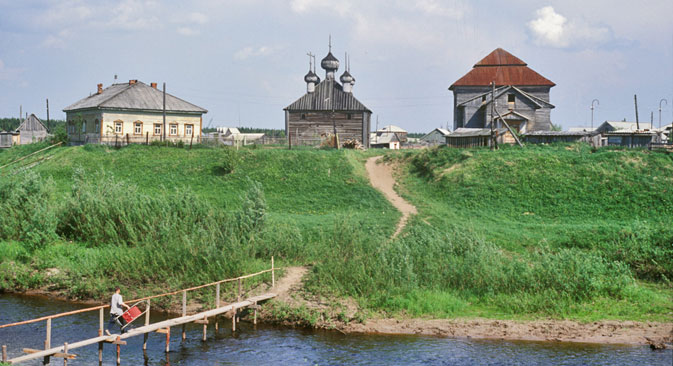 Time may be running out for some small villages in the Russian North, but the ones that remain are worth a visit.

The historic Russian north, broadly defined as the territory around the White Sea, is still dotted with villages that provide a glimpse of age-old traditional culture. With each passing decade, such places become fewer in number and smaller in population, as people move to urban centers, yet the Arkhangelsk region is still rich in traditional enclaves.

In some cases distinctive structures – particularly churches and houses – have been transported from dwindling villages to outdoor museums of wooden architecture. One of the largest – "Malye Korely" – is located to the south of Arkhangelsk.

There are, however, old settlements that survive in their original location. A notable example is the village of Izhma, situated on the small Izhma River some 15 miles northeast of Arkhangelsk. (There is a river and village of the same name several hundred miles to the east in the Komi Republic.)

The proximity to Arkhangelsk (population 350,000) has enabled Izhma to remain a viable community. Its log houses are generally well kept; and although there is limited farming, many of the some 200 inhabitants work in Arkhangelsk. Indeed, Izhma is readily accessible through a road that passes by the city's main airport, Talagi.

Despite the urban presence, a visit to Izhma conveys a sense of moving back in time. This impression is due above all to the distinctive form of the log Church of the Transfiguration, crowned with a high four-sloped roof and five wooden cupolas.

To get to Izhma take the local taxi or bus from Arkhangelsk.

Although the origins of the village are obscure, pioneers from Novgorod were in the region as early as the 12th century. The location was advantageous. The Izhma River – only 35 miles long – empties into the Kuznechikha River near its merger with the Northern Dvina estuary. As a result, the settlement was protected from flooding and still had ready access to the White Sea.

The original form built in 1679 differed from the appearance of the church today. Soon after its construction, chapels were attached on the north and south sides of the main square structure. These chapels contained secondary altars dedicated to the most revered northern saints: Zosima and Savvaty (the founders of Solovetsky Monastery) and Antony Siisky, who founded the Trinity Monastery near Kholmogory.

Apparently, each of these three components was crowned with a tower, similar to the design of the wooden Dormition Cathedral in the Karelian town of Kem. The Orthodox hierarchy frowned upon such towers as deviations from canonical church design, and in 1717 the regional bishop had them replaced with the pitched roof and cupolas visible today. The chapels were later dismantled.

In the late 17th century, the Transfiguration Church was complemented by a smaller church used for worship in the winter. Because it was heated, the church repeatedly burned. Its present version was built in 1887 and dedicated to the Resurrection of Christ.

The simple elongated form is now empty, lacking its cupola and open to the elements. During the 19th century a wooden bell tower stood between the two churches, but it has since disappeared.

The two abandoned churches are surrounded by wooden houses that are well defended against the severe climate. The houses are one-story, usually with another half story containing a summer room at the top. The logs are tightly fitted to minimize heat loss during the long winters. The windows, with their painted frames, are double glazed and carefully insulated.

Whether villages such as Izhma will continue to exist in their traditional form is open to question. But for the present, Izhma reminds of a time when these settlements served an essential role in sustaining the Russian presence within a vast northern territory.