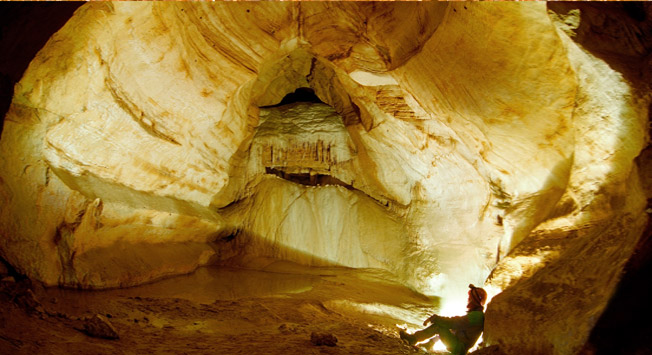 Lori Images, Legion Media
In the Urals one can still happen upon the glowing window of a forge, buy a talisman made of natural stone, or even go down into a real shaft where gold is being mined.

From the concrete jungles

Driving into the little town of Berezovsky, just 9 miles from Yekaterinburg, you would never think that it was the home of the Russian gold, which buttressed the Russian economy for many years. The extraction of gold continues through today and the Berezovsky mine is the one longest in operation in the world. Time seems frozen here: black derricks, low houses built in places where it would be impossible to build high risers seeing as how the road is laid on interstices. In the shaft we are descending into, mobile phones lose their signal at a depth of 10 meters.

First – safety instructions. One member of the group is equipped with a heavy respirator that looks like an aqualung and, in case of emergency will make it possible to breathe for 4 hours. Don’t forget the whistle for sound signalling: one toot –“stop!”, two – “forward!”

Riddles of the stone belt

“Ural” means, “belt” in Turkic; the Ural Mountains stretch more than 1243 miles. In ancient times they were called, as is known from Greek mythology, the Riphean Mountains, later the “Stone Belt,” and now they are known as “Russia’s Pantry.” It is here that the first Russian factories and mines opened up during the time of Peter I. Beginning in the 18th century, scientists and geology enthusiasts from many countries considered it their duty to visit the Ural Mountains. Truly, out of the 4,000 minerals that exist on our planet, more than 1,000 are found in the Urals. Numerous deposits of gold and silver, and iron, copper, magnesite, and nickel ore have brought the region fame.

In early 2014 an unexpected find in the Mariinsky emerald and beryl deposit, located in the Middle Urals, created a sensation in the jewelry world. A new precious stone, thitherto unknown to science, was discovered: mariinskit, which has characteristics similar to a diamond. The gem is of a bright green color and has a high light refractive index; it is capable of competing with the emerald in quality.

The Gem Ring is intended to serve the purpose of connecting the sites where the unique historical monuments of the Ural’s pantry of precious stones have been preserved. In addition, travelers on the route will see the Museum of Armored Vehicles, which is in the Guinness Book of World Records, in Nizhny Tagil and the rarest collection of motorcycles, and the famous falling tower (the Urals analog to the Tower of Pisa) in the city of Nevyansk. They will also see the Chernovsky marble quarry, a unique collection of malachite and articles of semi-precious stones, garnet mines, gold and silver fields, and much more.

Forward to the past

Foreign visitors interested in mineralogical and industrial tourism in the Urals will increase in number. The flow of tourists from China and the Czech Republic will grow in particular. German tour operators have also announced their participation in promotional tours in Sverdlovsk Oblast.

“Speaking of foreign tourists, in our region they are more often businessmen who come to Yekaterinburg for business purposes. They can dedicate some of their free travel time to geological and industrial tourism. Tourist agents bring foreign tourists, primarily, to the route of the historically well-known Trans-Siberian railway. In a summer we usually see several buses with Germans, Danes, Mexicans, and Spaniards,” says Elena Kislova, the founder of the Translators Association Bureau. “Mostly these are inquisitive people who are acquainted with Russian culture and literature or who have some other sort of interest in Russia. For example, one German guest requested to be taken to Asbest, where her father, as a war criminal, worked for several years after the war. Yes, Europeans are interested in the Russian backwoods…”

Minerological tourism in Russia is still very new and has a “semi-wild” character. However, the inadequacy of the infrastructure near certain attractions is compensated by the romance. Travelers can feel the spirit of gold prospecting and “touch real history.” For example, the first paneled home in Europe was built in Berezovsky by a local factory back in 1945 – and it still stands there as before. Many 80 year old miners look about 50 and they advise searching underground for the secret of youth. Upon request, tourists may be allowed to descend to a depth of 512 meters in an operating mine. Such a tour costs only 15,000 rubles ($419).

There will be an ethnic festival in Berezovsky in September 2014. It is dedicated to the 200 year anniversary of the discovery of alluvial gold. Several years ago the honored prospector of Russia, Berezovsky resident Valery Lobanov persuaded the great-great-great-granddaughter of the placer gold’s discoverer, the famous foreman Lev Brusnitsin, to exhume his remains so that, based on his skull, a bust and portrait could be made of this person. Both can be seen in the local gold museum.

… In the end, the tour guide advised us to go in summer to the Pyshma River, which continues to yield gold today; a third to a half of an ounce of gold is produced in washing about 3000 buckets of water. In general, this is not too scanty: for example, 1/25th of an ounce of this precious metal can be stretched 1.9 miles.

Main stops on the Gem Ring of the Urals:

Yekaterinburg is the capital of the Middle Urals and more than 50 various museums operate here. The most famous museum attraction is the Great Shigir Idol – the most ancient wooden sculpture in the world, carved more than 9.5 thousand years ago in the Mesolithic period.

Nevyansk is the most powerful Old Believers’ center as well as the birthplace of one of the most recognized schools of icon painting in Rus. The famous leaning tower of Nevyansk is more than 187 feet high and deviates 7 feet from its vertical in a south-western direction. It has underground rooms, an acoustic room, and an entrance to an assay laboratory in the wall. One may also go to the Transfiguration Cathedral and the Nevyansky Local History Museum, where the famous Nevyansk Icon can be seen.

Nizhny Tagil is one of the oldest centers in the world for mining and metallurgy. Here, father and son Cherepanov built Russia’s first steam locomotive. During WWII the city became an important “tank-city.” The Museum of Armored Vehicles, which is listed in the Guinness Book of World Records, is located here. There is a museum of the history tray production where master classes are held on the lacquer painting of the famous “Tagil trays.”

Murzinka is the capital of Ural gems and famous for blue topaz, rock crystal, and beryl. The Minerological Museum is named after one of the founders of geochemistry, Alexander Fersman. Samples of minerals from all over the Urals are collected here.

Alapayevsk has a unique museum of musical instruments from all over the world. It is located in the home where the famous composer Pyotr Tchaikovsky spent part of his childhood. The Reserve Museum of Wooden Architecture and Folk Art is found under the open sky in the village of Nizhnaya Sinyachika, where traditional folk festivals are organized for tourists.

Irbit hosts the Irbit Fair of folk crafts and handicrafts, which has been held in the Urals since 1638. The collection of motorcycles at the Motorcycle Museum has no parallel in the world. Here also is the only Museum of Fine Arts in Russia specializing in drawings and etchings: it has nearly 16,000 works – originals by Durer, Van Dyck, Rembrandt, Goya, Rubens, and other world renowned artists, a collection of European prints and original graphics, and monographic collections, as well as unique etchings that have no equivalents in the museums of Russia.

Artyomovsky has the Artyomovsky champagne factory where wine is produced by the difficult classic bottling method and is stored at a depth of 70 meters in abandoned mine shafts. In the giant shaft-cellars, where tourists are brought on excursions, trucks leave freely and even have their own traffic lights.

Rezh is home to the Rezh natural-minerological reserve, where fragments of tourmaline, opals, agates, quartz, amethysts, topaz, and feldspar can be found along walking paths. Berezovsky is the motherland of Russian gold and existing Russian gold mines.