The master of the taiga: the perils of life where the brown bears roam free 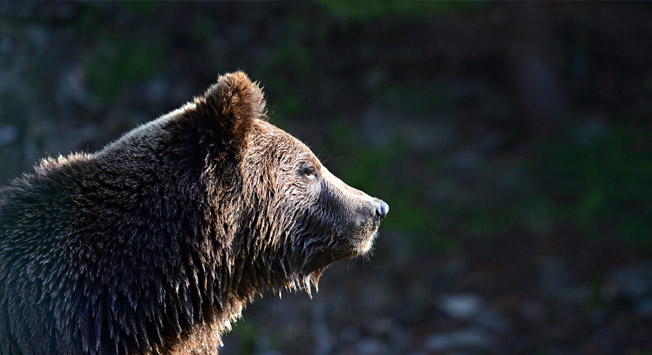 Lori Images, Legion Media
The brown bear – a symbol not only of Siberia but the whole of Russia – is not listed in the Red Book as an endangered species and is not threatened with extinction like the snow leopard. However, it comes out of the forest and into cities and towns, towards humans, thus confirming the common myths about Siberia.

Accompanied by research staff from the nature reserve called Stolby ("Pillars"), the boundary of which is just 7 kilometres from Krasnoyarsk, we went into the wild taiga, to walk along the game trails, to talk about the changing behaviour and lifestyle of the brown bear, trophy hunting for "the master of the taiga" as well as about local forestry and issues for the nature reserve, which is located within the boundaries of a major city.

The settlement of Beret. From here, along the Mana river, you can reach the Mana forestry in the Stolby nature reserve – to the cordons called Berly, Maslyanka and Kandalak, where foresters live and work and to where research scientists in Stolby systematically come to study the condition of the ecosystems and climate, to observe its animals and the conditions of the natural environment in general and to conduct annual monitoring of the brown bear.

The Stolby nature reserve is located on the outskirts of the vast Altai-Sayan mountainous area where the West Siberian Lowland and the Central Siberian Plateau meet. It is one of the smallest reserves in Krasnoyarsk Kray (Region), with an area of slightly over 47 hectares, covering the interfluve the right tributaries of the Yenisei river: the Bazaikha, Bolshaya Sliznevaya and Mana rivers. Our boats are coming along the latter, making noise. The taiga here is dark due to fir, spruce and cedar, and tall pine trees stand on the banks of the river, with birch trees just becoming green after the winter, and a few fishermen. The Mana, of a pleasant grey-green colour, meanders between small hills.

Vladimir Kozhechkin is a senior research scientist at the nature reserve and a specialist in the ecology of large predators. He began his work at the reserve in 1979 and defended his thesis on the wolverine, a rare and difficult-to-study species, but the brown bear has also been within the field of his scientific interests for a long time now. However, outside the urban jungle, V. Kozhechkin does not look like a PhD in biology and an armchair scientist, he rather looks like a forester: warm trousers with a belt, a stretched grey turtleneck with a wide neck, rubber boots on his feet and an old blue-grey backpack on his shoulders.

The Berly cordon is located in the southern part of the reserve. There are no fishermen here: a "strictly protected area" begins from the right bank of Mana, upstream from the cordon.

“Forestry is a very difficult job: you have to know how to stock firewood, to monitor trailways and, ideally, to look after livestock as well as to observe nature... Young people today do not know how to do all this, and few people are ready to live and work on the reserve,” complains Vladimir Kozhechkin.

The old forester’s house at the cordon is rather rustic – with a stove, some firewood, old oily jackets hanging on the wall, wide fur-lined skis lie near the TV set. There are smells of a cellar and damp wood.

A notorious myth that bears in Siberia wander through the streets of cities has already become virtually no myth: in the last decade, bears have begun to come out into contact with humans into cities and towns, appearing in country houses, on highways, and on hiking trails in the national parks increasingly often.

A couple of years ago the tourism zone in the Stolby reserve was closed because of the appearance of a bear that did not hibernate, and "bear" news reports annually excite not only the residents of Krasnoyarsk Kray, but also Tomsk, Kemerovo and Omsk Oblasts (Regions) as well as other Regions.

“The city affects the food base of the bear adversely.” Vladimir sips some tea, reaches for a sausage sandwich and continues: “For instance, 20 to 30 years ago, their food base was much richer, there were fields of berries and now there is almost no berries and there are not enough nuts. The creature is short of protein. In the lean years, bears were shot in one cemetery, because they came there and tore up fresh graves. Just imagine: a funeral procession is passing by, and a bear is digging up a fresh grave next to it.

The 1990s in Russia were watershed years not only for the society but also for natural habitats: berry yields fell sharply due to industrial emissions, the impact of the Kansko-Achinskiy fuel and energy complex (KATEK) has been noted by researchers even on the Yamal Peninsula, thousands of kilometers from Krasnoyarsk. Over several decades, the composition of the soils has seriously changed; the climate has become less predictable, which in particular has affected the harvest of pine nuts. However, the important thing is that over this time the animals have not had time to adapt to the drastic changes in nature.

We left the unfinished cold tea on the table and began to prepare to set off to the taiga.

The bear in Siberia, just as in the whole of Russia, is more than just a bear. Political engineers use it as a symbol of national power, marketing specialists as a profitable regional brand, journalists as an excuse to boost the ratings of their evening news, and citizens use it as a horror story for foreign tourists. However, for zoologists, the brown bear is simply a brown bear, a large carnivorous mammal found in almost Russia’s entire forest zone.

“The bear, as you are saying, is the master of the taiga – but how can it be?” Vladimir Kozhechkin is genuinely surprised. “There are also wolverines, wolves, lynx... The brown bear is simply the most numerous predator in our reserve.”

In this remote taiga, the brown bear is really the most numerous. Only mites seem to be more numerous.

“Do many poachers hunt for bears?”

“Not really. The problem is that professional hunters don't hunt bears in sufficient numbers.”

During the long period of their shared history, humans and bears ate the same food, used similar shelters and often preyed on one another. It is no coincidence that the indigenous peoples of Siberia, in particular Evenks, treated the bear with reverence and called it "amaka", which means "grandfather", while Russian peasants and Siberian long-time residents called the bear "the master" in conversations with each other in the late 19th and early 20th century. Hunting for this animal was for them a natural means of survival, and was accompanied by complex rituals and holidays. After man left the forest, bear hunting became one of the most prestigious and emotional activities, or simply a "trophy" activity: to procure a bear alone or with dogs is a really dangerous occupation. However, in the 20th century, especially since the mid-1980s, when Russia introduced licensing to hunt the "master", professional hunters started to go bear hunting increasingly less often, and bears grew in number in the taiga. These days, a lot of bears go to settlements, where they kill goats, horses, cows and pigs in farms, and scare summer residents in the country as well as urban dwellers.

“Hunting is a method of natural control of the population. It is labour-intensive and doesn't pay its way well,” says Vladimir. “The rural population is disappearing, and the number of hunters with good dogs, with huskies, who know how to hunt bears correctly, is in decline, and young people are not interested in this. In contrast, there are plenty of amateur hunters from the "moneybags" circles. They do not like the hassle of using dogs: they want to go out on a boat, sit down in their chair and spot a bear grazing on an open hillside, then they eye it up in their optical sights, and swat it.

Today, bear hunting has become more difficult for an ordinary hunter: a license for the "trophy" costs three thousand roubles, and in recent years, hunting in dens has been banned, as this method of hunting was deemed to be "inhumane". In ancient times, all the nations in Eurasia hunted the brown bear in dens, and less often they hunted for the beast by meeting it accidentally, if it called on the hunter "to fight" – by leaving scratches on a tree. "Come out, you old man," they would say to the slain bear, apologizing and expressing their reverence, and then, when skinning the carcass, they imitated the undressing of the bear.

Both zoologists and experienced hunters say that the best way to avoid problems with this predator is not to seek encounters with it. Therefore, if you happen to be in the taiga, you should observe the depth of the forest closely, watch whether bushes move, listen carefully for a roar from afar, and if a bear is there but did not notice you yet, leave the place quietly but don't run.

The "normal" brown bear is a dangerous predator indeed, which, however, does not seek out meetings with man. Moreover, it is afraid of man. This "diplomat", says Kozhechkin, would also try to escape after having heard you. But there are situations when an encounter with a bear can be fatal. For example, if you see nice fluffy cubs (and they, out of stupidity, can run out on to a highway or walking trails in nature reserves and national parks), do not rush to be photographed or play with them, because the mother bear, even a few hundred meters away, after having sensed the enemy, would run to sort this out. It is unwise to show any interest in places where the brown bear has hidden its booty: no one wants to share a meal with a stranger. In June or July, look behind you to check whether there are mating bears nearby, because, according to zoologists, "the defiant, courageous condition of these animals can get you into trouble." Most importantly, you should watch and show – by talking, making noise, laughing and crying – that you are in the woods. Because an unexpected encounter with a bear, for instance in a berry field, can be fatal for you.