Back to the roots: learning how to weave famous Russian shawls 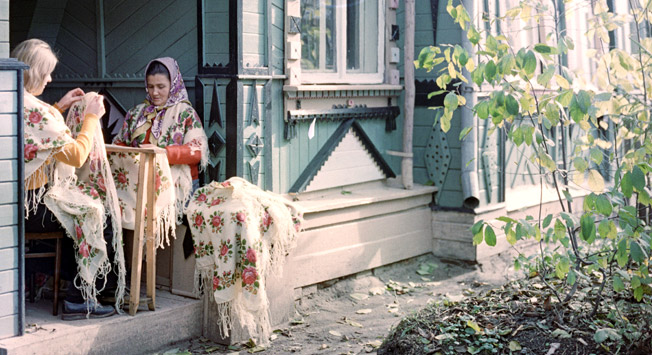 Ria Novosti
In the second half of the 19th century, the shawl “migrated” from India and Egypt to Europe – it was at this time that manufactories in Pavlovsky Posad started to produce various kinds of shawls: printed and woven, silk and woollen, printed cotton and jacquard.

The Shawl Museum in Pavlovsky Posad was founded by the private collector Vladimir Shishenin. One day, twenty years ago, he bought a vintage head shawl from an antiquarian. The shawl surprised him with its beauty and subtlety of the work. This item started his collection, which later became the basis of the exposition. Vladimir likes to tell how he had found this or that shawl, as well as – with some bitterness – about losses inevitable for every collector, for instance, about an old lady who did not want to give up her ancient shawl from the bottom of an ancient chest ("What if I am to marry tomorrow?").

Today’s exhibits (produced not only by Pavlovsky Posad factories, but also by factories which were competing with it) are presented at the museum in the historical and technological sequence: from the spindle and the tow on the spinning wheel to the loom and further to ubruses and towels embroidered by hand with gold and silver threads. And then to shawls with printed floral ornament and "commemorative" shawls dedicated to historical events and people (for instance, the coronation of Nicholas the Second or the feat of Ivan Susanin). Besides the traditional purpose, shawls in the past also had others functions, now forgotten: propaganda, information, and a commemorative item... For example, images on shawls taught how to assemble the rifle or how to dress a wound. Or celebrated the first decades of the Soviet power.

The names of archetypal patterns on shawls tell about ancient traditions and lifestyle: for example, the pattern called grape, which refers to a carol song of praise; eastern cucumber, which came from the Scottish town of Paisley (this pattern is also known as a fruit of the palm tree, pomegranate in cross-section, Turkish bean...); rose and horseshoe... The latter two patterns literally flooded the Russian market of shawls in the late 19th century – thanks to a special technique that greatly reduced the cost of the manufacturing process: images on shawls were not woven on canvas but were printed with paints.

Today, the Shawl Museum in Pavlovsky Posad teaches the art of cloth-printing to all comers who wish to learn it. Master classes are conducted by both its own and foreign specialists; for instance, an Iranian cloth-printing master came here not so long ago. How had the technique of cloth-printing been mastered in those years, when the Shawl Manufactory in Pavlovsky Posad owned by Yacob Labzin and Vasiliy Hryaznov (who was later canonized as a local saint, by the way) supplied its products to the Emperor’s family?

"The process of making a shawl begins with the preparation of wooden printing boards which bear romantic names tsvétki (which resembles the Russian word "flowers") and manyéry (“manners”),” says Yuliya Terekhova, who compiled the guide to the museum in Pavlovsky Posad. “Manyery are used to print the contour, and their pattern is burned on the board and filled with metal. Tsvetki are used to print a colour, and each colour requires a separate board. It is not possible to cut a board the size of a shawl; therefore images were split into parts and printed in repeating parts. First, contours were pressed on a shawl, and then colours were printed one by one (one model of shawl could require as many as two dozens of tsvetki). Thus, the manual printing of shawls is a series of several hundred applications of boards with paints of different colours on one piece of cloth, and they should be accurately combined too."

The laborious and meticulous process of cutting the wooden patterns is another story. On the other hand, these wooden patterns serve for decades, as long as the timber is alive. Every visitor can create his or her own shawl by using the boards cut at the museum itself – from sketches selected in a separate contest. For example, by using tsvetki depicting some characters from the world of the Finnish writer and illustrator Tove Jansson: Moomin, Miss Snork... however, in the Russian style.