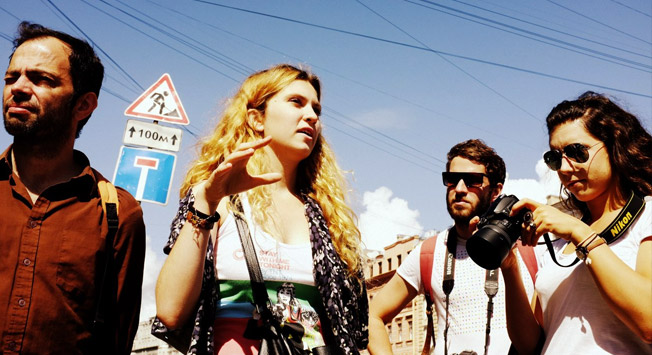 RBTH chose the top 10 tours of St. Petersburg for foreigners.

1. St. Petersburg off the beaten track

This city on the Neva River is filled with streets that you won’t find on any map, and secret places that tourists aren’t usually taken to. You’ll find amazing architectural monuments steeped in history, which even indigenous St. Petersburg residents do not know about. For example, in St. Petersburg there is a building, on every brick of which a crazy artist wrote one digit from 0 to 9, to create his endless inventory number in the list of wonders of the world (it is even called the code of the universe, no less), as well as a street, known to almost nobody, on which there is only one house. Learn about unofficial titles, stolen monuments, as well as about the traditions followed by every St. Petersburg resident (unconsciously) by taking the tour St. Petersburg off the beaten track.

2. Restaurants and bars “with a history”

St. Petersburg restaurants are varied and attractive, but especially popular among visitors are places with a history. For example, in the main imperial tavern Austeria, Peter I discussed important (or not so very important) affairs of state. The Metropol Restaurant has its own brewery, which for more than 150 years has been producing several Belgian beers of the highest quality. Dine in the same places as the former leaders of the USSR, Russia, foreign states; soak up the ambiance in the places where prominent poets of the Silver Age read their poems, or where popular soloists performed with orchestras, and visitors were served by lackeys in frock coats, without having to spend a tangible sum on a five-course dinner. Just take the tour Historical restaurants and bars.

Learning the language on the Russian language tour certainly sounds daunting, but becoming acquainted with the basic expressions in the language of Dostoevsky, so that you can get perhaps not to Kiev, but at least to the hotel you stayed at last night – is quite realistic. Interested visitors may learn the Cyrillic alphabet on this tour, so as not to be so confused in St. Petersburg’s maze of signs and symbols, where there is practically no Latin lettering. You might also learn words in the St. Petersburg dialect, for example: “porebrik” (edge), “paradnaya” (entrance),“shawerma” (kebab) “badlon” (pull-over or jumper ) and might even pass for a local on Nevsky Prospect. The tour gives helpful hints, such as to survive on public transport during rush hour.

4. Glass of vodka on the table

Ryumochnaya (kind of bar in Russia) establishments appeared in St. Petersburg in the 19th century, and served visitors who were not in the mood for a long meal. Along with a glass of vodka, servers brought guests an appetizer, newspaper and a cigarette. As a result of the anti-alcohol campaign during perestroika, most of these institutions were closed, so very few of them exist today. During the excursion St. Petersburg’s Ryumochnaya: Taste of Russian vodka you will visit Ryumochnaya establishments in the city center to find out who drank in them in the past and who drinks there today, where to drink cheap, and where is the most dangerous to drink.

The Saint Petersburg Metro entirely justifies its literal translation from French – the “Capital”. The opulent architecture of the subway, decorated with marble sculptures and frescoes, was created when Leningrad was still healing from the battles of the Second World War. The excursion Metro Palaces will help you become acquainted with the history and architecture of the Red Line of the St. Petersburg Metro. It will also dispel any myths about the “Metro-2”, a huge network of underground cities, and reveal to where the Stalinskaya Station disappeared.

6. Creativity for the in-crowd

Over the past few years, a host of creative clusters have appeared in St. Petersburg. In general, creative spaces are formed in abandoned factories. Under their roofs gather creative young people, gallery owners and entrepreneurs. This is the place for interesting work, for a cultural life, communication, and the generation of new ideas. But ideas are not for everyone: just for people in the in-crowd. The excursion Creative spaces of St. Petersburg will acquaint everyone with four spaces in St. Petersburg – the Architect, the Taiga, the Fligel and the Third Cluster.

Several buildings in the Soviet Union, created in the 1920s post-war period, were built in the style of constructivism, and usually have rough rectilinear shapes. They have practically no decoration, but instead emphasize the finishing of the building – brick, concrete, glass. Later buildings were built in the styles of brutalism and hi-tech. Factories and plants with laconic forms on Obvodniy Canal, geometrically distinct residential areas on Vasilyevski Ostrov (Vasilyevski Island – one of islands in the delta of the Neva River), administrative buildings with precise straight lines – all of this can be seen on the tour Futuristic Buildings.

The banya (bath house) at a dacha played a big role in Russian history. It was a ritual designed to punish the guilty (that is the reason for such heat and such strong steam) and to expel harmful spirits (which started the tradition of whipping people with brooms). It, was customary before a wedding, part of the rules of etiquette, to “treat” guests to a banya). On this tour, soak up not only the therapeutic steam of a true Russian banya, but also spend time in the lap of nature on the Russian dacha, banya and cooking experience tour. But be careful, after a real Russian banya, few people come out alive.

9. Behind the facade – the courtyards

Widely known are St. Petersburg’s courtyards – tight spaces immersed in eternal twilight, with inward-facing windows that opened into kitchens and servants’ rooms in the old days. There are dilapidated courtyards, where little has changed over the last century, and then there are the renovated ones, paved with tiles and brought to European brilliance and purity. During the Excursion in the yards of St. Petersburg you will have an opportunity to assess the uniqueness of the architectural and engineering concepts, to appreciate the amazing originality of the planning solutions, and to learn the difference between a “parade” staircase and a “black” staircase.

To surprise oneself and loved ones with unusual things—jewelry, home furnishings and gifts—is not difficult in St. Petersburg. It is enough just to visit the quaint shops and see the unique products that they offer. Where to order and buy customized gifts, designer accessories, absolutely absurd costumes (if, for example, you want to go snowboarding in a zebra costume), as well as things that were worn before, and which may come into common use only after ten or twenty years. An original shopping experience in the “Northern Capital” is offered by the Creative shopping tour. In the end, you will not come home empty handed.

The Internet portal Sputnik offers unique tours of St. Petersburg (and more) for those who do not wish to trod along the standard tourist routes, and prefer stories of local residents to a standard travel guide.