Must visit places around Nizhny Novgorod 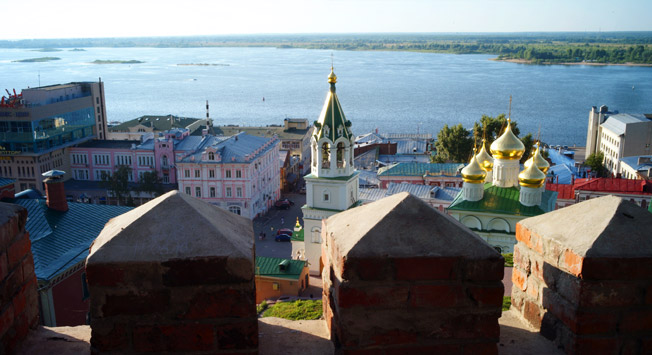 Ria Novosti
The Nizhniy Novgorod region was for a long time closed to outsiders and this was influenced by the presence of the ‘nuclear’ town Arzamas-16, Russia’s first nuclear centre, now known as Sarov. The closed city is however a thing of the past, and today a variety of opportunities converge in this region to cater for all tastes.

What is the Nizhniy Novgorod region famous for beyond its borders? There are still several places here that are ‘worshipped’ by tourists, which are definitely worth a visit.

A decision was taken in 1946 to set up the country’s first nuclear scientific-production centre in Sarov. For many years this period in Russia’s history remained under lock and key. Today anyone who is interested can learn about the fundamental stages that went into creating Russia’s contemporary nuclear shield, touch the Soviet super-bomb and learn about the lives of those who stood at the threshold of the country’s nuclear might. One only need visit the historical museum of Nuclear weapons, which opened in Sarov on 13 November 1992.

Among its exhibits is the first Soviet atomic bomb the RDS-1 – the famous ‘Tatyana’, as well as the RDS-4, which was the first production atomic bomb, and the first artillery shell with a nuclear warhead, as well as the warheads belonging to the U.S.S.R.’s first strategic missiles. The precursor to the bomb of bombs, the famous RDS-1 nuclear device now stands in one of the museum’s halls. Next to this device is the console, from which the bomb was activated and the aerial bomb casing created specially for it.

The famous RDS6s ‘sloyka’, which was the world’s first hydrogen bomb, always attracts particular attention from visitors to the exhibition. Andrey Sakharov, who was still young at that time, played an active role in creating this device as a member of a group of theoreticians.

Probably the most controversial of the museum’s exhibits in Sarov is the bomb, which entered the history books under the peculiar name of the ‘Kuzkina mat’. It was this bomb, which Nikita Khrushchyov, banging his shoe fervently on the rostrum, promised to demonstrate to the Americans. The characteristics of this, the world’s most powerful experimental hydrogen bomb stir the imagination: the power of the device inside the casing was equal to 100 megatonnes of TNT. In order to better understand how much power this represents, imagine all the explosive charges used in World War Two put together, multiply this by 20 and you will arrive at an explosive device, with a power equal to that, which was readied for testing. Owing however to the initiative of Andrey Sakharov and due to the fact that the ‘mamasha’ was far too big to fit into the belly of the specially prepared Tu-95 bomber, it was reduced to half its size. On 30 October 1961 the Tsar-bomba was detonated at an altitude of 4.5 km above Novaya Zemlya.

Entry to the city of Sarov is only affected by means of a special pass, which can be drawn up when booking an excursion around the nuclear city.

The first location, which one needs to remember, is Diveyevo. The Svyato-Troitskiy Serafimo-Diveyevskiy Monastyr (the Holy Trinity Saint Seraphym Diveyevo Monastery), the fourth and final apanage of the Mother of God, is in the heart of this village to the south of the region. The monastery is inexorably linked to the name of Saint Seraphym of Sarov and his relics are kept there. Solemnities of Saint Seraphym of Sarov are held here every August, however if you prefer not to be in a crowd of people, choose any of the other summer months for your visit.

For those who prefer ancient Russian architecture to nuclear reactors, the Makarevskiy Monastyr (Makarev Monastery) in the Lyskov district is worth a visit. This monastery was founded in 1453 by Saint Makary Uzhensky. After its inception however the cloister was smashed by the Tatars, therefore the remaining architectural structures date back to the beginning of the 17th Century. The wonderful ensemble that serves to this day as a monastery rests on the right bank of the Volga River and not only attracts pilgrims but also tourists, who want to admire this most beautiful example of ancient Russian architecture.

Gorodets, which is a contemporary of the city of Moscow, cannot be missed. This is one of Russia’s most ancient cities, and was also founded by Yuriy Dolgorukiy. It gained notoriety as one of the ‘muzey pod otkrytym nebom’ (open air museum) cities. Every house in the centre is a Cultural Heritage Site. One should definitely visit the neighbouring ‘Gorod masterov’ (Craftman’s Centre), which houses displays and traditional craft workshops for trades like: gold embroidery, gorodets painting, pottery making, wood carving, and gingerbread making.

As is often the case however, the most interesting areas are those off the beaten track.

In the village of Bolshiye Baklaldy is the world’s only cherry museum. Incidentally this trip is a must in May: the beauty of the cherry orchards in blossom defies description. The history of this location dates back to the 17th Century, when the first (varochnaya) cooking room was founded under the Boyar Boris Morozov. This was where juices, liqueurs, and marinades were prepared. They have retained their notoriety to this day. Visitors to the museum will certainly be invited to familiarise themselves with the famous taste of these products. Incidentally not only the museum, but also the whole village of Bolshiye Bakaldy is very nice, and in spring it is transformed into one enormous blossoming cherry orchard.

From these cherry orchards the road leads to the village of Buturlino, to the natural history museum, which is housed in a beautiful building constructed in the ‘provincial classicism’ style. The museum houses artefacts from ancient peasant life, displays from the Bornukov stone carving school, as well as the ‘Staraya kvartira’ – the interior of a village school teacher’s house on the eve of the outbreak of war.

The culmination of the visit has to be the Baronial village in the Gagin region, in which Antione Jomini’s estate is located. Some of the structures dating back to the beginning of the 19th Century are in semi-ruin, while others are comparatively well preserved not only externally, but also internally. A rich park is laid out around the estate. This is one of the most beautiful estates in the Nizhniy Novgorod region and it is worth making the long journey south to see it.

A tour around the old believer sketes

A trip to the north could serve as something of an alternative plan for an excursion – around the significant landmarks of the Nizhniy Novgorod community of old believers.

The first location is the village of Sharpanovo, which houses the tomb of the elderly nun Fevroniya, from which legend has it the Easter spa waters would flow, as well as other ancient old believer burial sites, and two old ponds. Locals to this day still find pre-revolutionary coins in one of these ponds - in the Chistiy prud (Clear pond). The local skete, known as Stariy Sharpan has existed for around 170 years, and was a real stronghold of the persecuted old believers.

Leaving Sharpanov we head for Sharino, the location of the tomb of the ancient monk Serapion, a devotee of the old believers, revered for more than 200 years.

The next location is Osinki, where one can visit an ancient well, from which the water never freezes over in winter, and see the memorial plaque for the monks who were burnt at the stake. Five of their tombs have been preserved, which are to this day tended lovingly by Semyonov old believers.

By the way many of these tombs are examples of a unique architecture, and are decorated with carved golbets (a monument over a grave shaped like a small wooden house or a cross with a simplified roof).

The crowning glory of the trip is the old believers church of Nikola Chudotvortsa in Semyonov. This is an active ancient orthodox church. A visit to the Semyonov museum of art and history helps one to immerse oneself in the story of the core faith. Among the exhibits are not only everyday items from the lives of the old believers, but also ancient furniture, items of ironmongery, maps, books, photographs, and icons. Incidentally the advent of the famous Khokhloma school, in which gold shows through on painted wood, without using gold coloured paint has been linked to the community of old believers. For this to happen the item is coated with clay, and then with a sliver powder, and then linseed oil, and it is then painted, before finally another layer of linseed oil is applied. The colours grow darker after firing, and this gives rise to the famous golden Khokhloma luminescence.