The last mystery of the Romanovs: following the killers’ footsteps 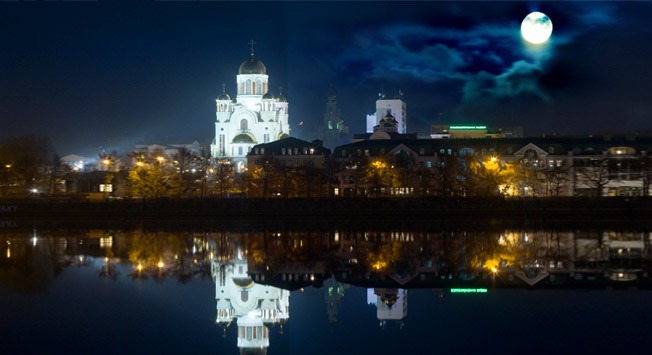 Ria Novosti
Yekaterinburg has been trying in vain for years to rid itself of the mournful brand of “the city where they killed the royal family.”

After Nikolai the Second was forced to abdicate his throne in 1917, the Romanovs lived under arrest in the Aleksandrov Palace at Tsarskoe Selo. Then the Provisional Government decided for the sake of the safety of the crowned heads to temporarily relocate them to a remote area –Tobolsk. There is a route in the Urals and Siberia that follows the last path of the Romanovs to the place of their death. It starts at the Imperial Wharf in Tyumen and passes through Tobolsk (where the Romanovs lived a calm, measured life in the governor’s house, attending services at the Church of the Annunciation) and ends in Yekaterinburg, which was only supposed to be a temporary stop on the tsarist arrestees’ way to Moscow. In accordance with the decision of the All-Russian Central Executive Committee, the Romanovs were to appear before a court in the Russian capital. Along the road from Tyumen, tourists can also stop in the village of Pokrovsk to visit the Grigori Rasputin Museum – he was an elder and healer, and the favorite of the imperial family. This healer helped the heir to the throne battle hemophilia. After Yekaterinburg, make stops in Alapaevsk, where the emperor’s relative, the Grand Duchess Elizaveta Fedorovna, and the Grand Romanov Dukes were killed; in Perm, to see the place of the execution of Prince Mikhail, the younger brother of Nikolai the Second; and in Nybor, where the uncle of the last emperor, Fyodor Romanov, died. Today, we’ll tell you a little bit about the memorable places in Yekaterinburg where the deposed emperor, his wife Aleksandra, and their five children, Olga, Maria, Tatyana, Anastasia, and Aleksei, spent their last days and were executed.

All excursions that follow the last steps of the Romanovs traditionally begin here. The church was built in the place where the royal family is believed to have been executed. Until 1977 the house of the engineer Ipatev stood here; this was the place chosen in 1918 as the prison for Nikolai the Second’s family. It is here that the royal family had its last Easter, celebrated the Tsar’s 50th birthday, and, according to the official version of events, was shot in the basement at the order of the Executive Committee of the Ural Region Soviet of Workers, Peasants, and Soldiers Deputies on the night of July 16th. The private chef, the chamberlain-footman, the chamber maid (lady-in-waiting), and the family doctor Evgeny Botkin were shot along with them. According to a note by the head executor of the regicide, the Chekist Yakov Yurovsky, the Romanovs did not realize they were being led to their execution until the very last moments. After the first shots, the sole son and heir to the emperor, 13-year-old Alyosha Romanov, and three of his sisters were still alive. This surprised the executioners: they had aimed directly at the heart but the bullets ricocheted. When they tried to stab one of the princesses with a bayonet, they could not pierce her corset.

After the demolition of the house by the decision of the Central Committee Politburo, the lot was empty for almost a quarter of a century and became a real magnet for tourists and pilgrims. Since 1989 there has been a prayer session held at the site of the Ipatev home on the nights of the 16th and 17th each year. A year after the killings, the first wooden memorial cross was placed here, which vandals broke several times. The cross was replaced by a metal one that still stands to this day. In 2000 the Russian Orthodox Church canonized the royal family as saints of the class “Holy Martyrs.” Three years later the “Church on the Blood” was built on the fateful spot. The basement room of the Ipatev home (where the family was shot) has been reconstructed here and there are several exhibits dedicated to the last month of the life of emperor Nikolai the Second and his family in the museum section. Every year at Christmas the ice sculpture festival “Star of Bethlehem” is held near the church. During Easter week anyone can climb up the belfry and ring the bells. Working in the church is the singing school Oktoikh, a one-of-a-kind school of church bell ringers and icon painters. In mid-July, many pilgrims flock here to participate in the multi-hour night liturgy in memory of the Royal family, which concludes with a traditional procession to Ganina Yama, the pit 10.5 miles from Yekaterinburg where, supposedly, the remains of the royal family and its attendants were buried after being shot.

This is the abandoned Isetsk mine in the forest not far from Yekaterinburg, and it was into the flooded iron ore shaft that it is believed the corpses of the royal family and its attendants were thrown after the shooting in the basement of the Ipatev house. Pilgrims try to make it to Galina Yama by the old Koptyakovsk Trail since, according to the most popular version of the story, the remains of the royals were hauled along this very path. This road was built long ago.

The murderers discerned that Tatyana, Olga, and Anastasia were dressed in special corsets. They decided to strip the bodies naked at the burial site. Each of the princesses had a portrait of Rasputin around their neck with the text of this prayer. Valuable diamonds and jewels were in their corsets, which had an accumulated weight of about half a pound. If we are to believe Yurovsky, the jewelry found was hidden underground in the Alapaevsk factory and then dug up and sent to Moscow.

In 2000 his Holiness, the Patriarch Alexei the Second, blessed the construction of a monastic complex at Ganina Yama. After three years an island of “wooden Russia” rose in the forest. This is a male monastery dedicated to the royal martyrs in the family with seven churches, one for each member of the royal family. At the edge of the old shaft a 13 foot cross was placed next to a stone with the words from the Holy Scripture, “I will not spare him because he burned the bones of the king of Edom into lime,” on it. These words were the last written by the emperor Alexander into his diary two hours prior to the execution. The monastery guards the reliquary cross that belonged to the Romanov family. In the opinion of Orthodox believers, Ganina Yama is a “living antimension,” that is a special place hallowed by the dust and ashes of the saints.

This is the muddy, marshy hollow near Yekaterinburg next to the Old Kopyatovsk road and a couple of miles from Ganina Yama. It is believed that it was namely here that the bodies of the members of the royal family and its servants were secretly reburied. When, on the day after the shooting and burial in Ganina Yama, it became clear that there could have been witnesses to the hasty burial of the royal corpses, the Chekists returned to the mine, extracted the bodies, and decided to secretly relocate them to a deeper shaft on the Moscow tract.

However, the truck hauling the corpses got stuck after a couple miles in the natural boundary of the Porosenkov Ravine. Here the corpses were unloaded and covered in sulfuric acid, and their remains were reburied. According to one version, the Chekist Filipp Goloschekin, a dental technician by profession, ordered another participant in the regicide, Peter Ermakov, to burn up three of the bodies, Nikolai, Alexei, and Anastasia, but then, as “teeth don’t burn,” to destroy the heads separately in sulfuric acid. They hacked the bodies apart and the corpses were put in a shallow pit; then the faces and bodies were doused with sulfuric acid and covered in earth and brushwood. The pit was covered with railroad ties so that no traces of the pit would be left.

In late 70s, a group of Ural researchers with the help of old maps and archival materials went on a search for the royal remains and found nine people buried near Sverdlovsk (the Soviet name for Yekaterinburg) in the area of the railway crossing in the Porosenkov Ravine. Investigators came to the conclusion that these were the remains of the Romanovs and their entourage. However, bones were dug up again. Excavations on the Old Koptyakovsk Road were renewed only in 1991. Archeologists found 700 bones in the discovered burial ground: a cranial vault, several teeth with a lower jaw, hip bones from the left and right legs (one leg was male and the other female), nails, and the corners of wooden boxes, bullets, and ceramic fragments. After they continued excavations in 2007, researchers concluded that these were the remains of the heir to the throne Alexei and the princess Maria. Now Porosenkov Ravine is a small and rather empty field in a forest area where a gate stands with the inscription, “Memorial to the House of the Romanovs” on it and a wooden cross behind it.

Some researchers are convinced that these remains are unrelated to the royals and that Porosenkov Ravine is not the “final resting place” of the Romanovs. “During excavations, in the same cultural layer, the following things were found that the broader public does not know about: a 15 kopek coin from 1930; and during the continuation of the research were found one, three, and five kopek coins from 1943 and three bullets from the TT pistol, which only appeared in the Soviet Union in 1934,” Vadim Viner, the president of the Center for the Investigation of the Circumstances of the Killing of the Members of the Family of the House of the Romanovs, professor at the Russian Academy of History and Political Science, and Yekaterinburg resident, told journalists.

The remains which were found in the Porosenkov Ravine are considered those of the royals conditionally and are now kept in the Petropavlovsk Cathedral in St. Petersburg. However, the Russian Orthodox Church does not recognize their authenticity. The exact place of the burial of the royal bodies is unknown. Indeed, the act of destruction and concealment of the bodies was even more secretive than the murder itself. The recollections of the participants in the shooting should never be believed unconditionally either.

Moreover, the open question yet remains: was there ever really an execution? To this day the ends of those who made the decision to destroy the Romanov family have not been found. Was that order ever really given? Vladimir Lenin had demanded that the Romanovs be brought before the court in Moscow. There have been about 230 people throughout the world who have declared themselves to be surviving members of the royal family at one time or another.