The Savva-Storozhevsky Monastery: Guardian to the West 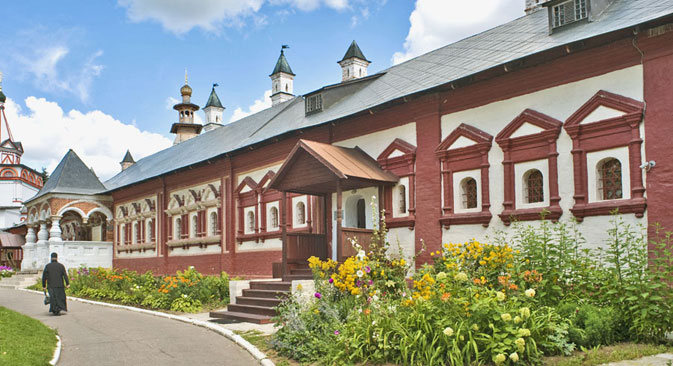 Just outside the capital, this an ancient monastery has served as a place of pilgrimage for centuries.

Text and photographs by William Brumfield

The town of Zvenigorod, some 19 miles due west of Moscow, is one of the area’s most picturesque areas. In summer or winter, its location on high bluffs overlooking the winding Moscow River provides rare vistas of an untouched landscape. And at the center of this hilly terrain is the St. Savva-Storozhevsky Monastery.

Although the earliest written reference to Zvenigorod does not occur until 1339, it is possible that a settlement existed there as early as the reign of Yury Dolgoruky (1090s-1157), who is considered Moscow’s founding prince.

Indeed, the site provided a clear view against any approach from the west. Its name derives from the words for fortified point (gorod) and “to ring,” as in an alarm bell.

During the 14th and 15th centuries, Zvenigorod served as the center of a small principality subordinate to the Grand Prince of Moscow. At the turn of the 15th century, the town was ruled by Prince Yury Dmitrievich (1374-1434), son of Moscow’s renowned Prince Dmitry Donskoi.

In the late 1390s, Prince Yury gave his support to the monk Savva to establish a monastery on a small hill known as “Storozha,” meaning “guard,” or lookout. Savva, who died in 1407, was a disciple of the great founder of Muscovite monasticism, St. Sergius of Radonezh. Both monks served as spiritual advisors to Moscow’s rulers. Revered locally after his death, Savva was canonized by the Orthodox Church in 1547.

To get to The Savva-Storozhevsky Monastery take the local train from Moscow's Belorussky Railway Station to Zvenigorod and then take a local bus (№ 23 or № 51) and get off at the "Monastery" stop.

In 1398 work began on the monastery’s first wooden structures, including the log Church of the Nativity of the Virgin, to which the monastery was formally dedicated. With the devoted support of Prince Yury, this humble structure was replaced around 1405 with a limestone church that is one of the oldest masonry buildings to survive from medieval Muscovy.

The Nativity Cathedral of the St. Savva Storozhevsky Monastery is modest in size when compared with the great Kremlin cathedrals, but its elevated single cupola, covered in gold leaf, still serves as a dominant landmark.

The facades are decorated with an intricately carved limestone frieze. For centuries the building stood with a simple four-sloped roof, but a major restoration in 1972 recreated what is assumed to have been the original appearance, with a roofline that follows the rounded gables (zakomary.)

The west, south and north facades of the cathedral originally had portals set within painted ogival arches, but subsequent additions in the 17th century enclosed all but the north portal, which is still clearly visible. On the east is an apse of three parts, which contains the main altar.

The interior space is segmented by four piers beneath the cylinder, or “drum,” that supports the cupola. The walls are covered with frescoes done in 1656 by a group of artists led by the master Stepan Ryazantsev.

During the same period, a large chapel dedicated to St. Savva was added along the south and west facades of the original structure. Its interior is covered with 19th-century wall paintings portraying the life of St. Savva. Over the east part of the chapel is a small but brilliant gold cupola. The chapel also contained the cathedral treasury.

Throughout the 15th and 16th centuries, the monastery was favored as a spiritual retreat by Muscovy’s rulers, who paid homage to the relics of St. Savva. In the 1550s the young Tsar Ivan IV (the Terrible) and his beloved first wife Anastasia frequently visited the monastery.

At the beginning of the 17the century, the Savva-Storozhevsky Monastery suffered from the chaos of the dynastic crisis known as the Time of Troubles. Occupied by various competing forces, the monastery began a slow recovery following the enthronement of Mikhail Romanov (1596-1645) and the establishment of the Romanov dynasty in 1613.

The monastery’s fortunes dramatically improved in the 1650s with the largess of Tsar Alexei Mikhailovich (1629-1676). By the end of the century almost every part of the monastery, including its walls and towers, had been rebuilt in brick. Even the Nativity Cathedral underwent substantial modifications. The frescoes in the cathedral were also added during the expansion.

The most striking addition was the bell tower, which contained a church dedicated to St. Sergius of Radonezh. Erected in 1652-1654, the bell tower astonishes visitors with its panoply of spires, bright colors and arched openings for bells.

The largest of these bells — the 35-ton “Blagovest,” or Good Tidings — was destroyed in the fall of 1941 during an evacuation attempt as German armies advanced toward Moscow; it has now been replaced. Attached to the bell tower on the east is the colorful Trinity Church (1651-52), located over what had been an early east entrance to the monastic compound.

Tsar Alexei was so captivated by the monastery that he made it a summer residence and built extensive chambers within the walls on the southwest side of the monastery. On the opposite side arose chambers for his wife and her attendants.

The monastery walls and towers were also expanded in an imposing display of royal power. Of special note is the Red Tower over the east gate, with a small church dedicated to Aleksii, Man of God, an ascetic who lived at the turn of the 5th century.

After the Soviets came to power, the monastery was closed and the relics of St. Savva were sequestered. In 1998, after complicated negotiations, the relics were returned to the monastery, which resumed its religious functions in 1995.

The Cathedral of Saints Peter and Paul: The guardian of St. Petersburg

Less than a mile up the hill to the northeast of the Savva-Sotrozhevsky monastery is a separate compound known as the Skete (or “retreat”) of St. Savva. Here, near a sacred spring, the venerable monk retired for prayer and meditation.

In the 1860s the site was enclosed within its own wall, with an attached church and bell tower dedicated to St. Savva. Slightly below the skete is a sacred spring.

In 2007, for the occasion of the 600th anniversary of the saint’s death, the shrine was restored and the surrounding territory was embellished with floral paths. At the same time the sacred spring was covered with a capacious wooden chapel. Today, the St. Savva shrine has again become a pilgrimage site, nestled in the quiet refuge of the wooded hill.