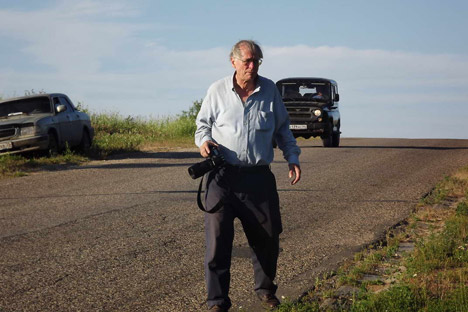 William Brumfield, the foremost American expert on Russian architecture, answered questions from RBTH readers submitted via social media about traditional Russian buildings and where to travel in the Russian North.

‪Mireya Rodriguez: I am going to visit Moscow, St. Petersburg and some cities of the Golden Ring. I would see the classic highlights, but also the new Moscow and St. Petersburg. I will be in Russia next September. What would you recommend that I see? Thanks a lot from México.

William Brumfield: There is so much to see in the central part of European Russia: Moscow, St. Petersburg, Novgorod, Pskov, the Golden Ring places such as Vladimir, Suzdal and Yaroslavl. Depending on the amount of time you have, all of these places are readily accessible. And September is a very good time to visit, when the fall foliage adds another dimension of color to the landscape.

In terms of recent developments, Moscow has the more dynamic architectural mix. The skyscrapers of Moscow City are the most visible and can easily be reached by subway (metro). But new projects are spread throughout the city. Tastes and opinions vary, but the energy is undeniable.

‪Kimberly Zenz: Where are the best places to see wooden architecture? Are there any places where it is still built/masters exist?

The most famous of these sites is Kizhi Island, in Lake Onega. It is readily accessible from Petrozavodsk, the capital of Karelia. Another popular open-air museum is Vitoslavlitsy, near Novgorod.

The Malye Korely museum site, near Arkhangelsk, is more distant, but is particularly impressive in its merger of landscape and examples of wooden architecture from the many regions of Arkhangelsk Region. I have published articles on all of these sites for my “Discovering Russia” series at RBTH.

Yes, there are indeed masters in the traditional crafts of wooden construction. This is certainly apparent at Kizhi. There is even a school devoted to traditional construction methods at the St. Kirill Belozersk Monastery, in the northern town of Kirillov.

‪Charles David Shaw: What is the definitive answer: Where and when did the first onion dome emerge? And why in Russia?

William Brumfield: Over a long career of lecturing about Russian architecture, I have most frequently encountered this question about the onion domes. The fact is that our knowledge about the origins is quite limited. I summarize information on the topic in chapter six of my book A History of Russian Architecture (1993; now available in a second edition).

The earliest visual evidence appears to be an engraving of St. Basil’s on Red Square in a book by the German scholar Adam Olearius (1599-1671), who accompanied trade and diplomatic missions to Muscovy and Persia in the 1630s. His travel account achieved great popularity and remains an early fundamental source of knowledge about Russia during that period.

In the engraving, St. Basil’s (aka, Cathedral of the Intercession on the Moat) clearly has the elaborate onion domes that we associate with it today. They apparently appeared as the result of a major repair to the church following a fire that damaged much of the upper structure in 1588.

Why did this form take shape at this time? We are not sure. One hypothesis suggests that it imitates an onion dome that was presumably over the Holy Sepulcher (the grave of Jesus Christ) in Jerusalem in the early medieval period.

Jerusalem was a very important theme in Russian spiritual culture in the latter part of the 16th century. Some even considered Moscow the new Jerusalem. Therefore, the argument goes, the onion dome would have expressed this idea in the most visible new church of Ivan the Terrible’s Moscow. But this is just a hypothesis.

We do know that the onion dome became so admired that it replaced more traditional domes on Russian churches far older than St. Basil’s. But the great Moscow monument remains the first example for which we have documentary evidence.

In short, there are a numerous conjectures but very little documentary evidence about the reasons for the proliferation of the onion dome on Russia’s churches.

‪Kevin Fomalont: What route does the professor recommend to travel through the Russian north for about a month? Does he recommend visiting fewer places and enjoying nature?

William Brumfield: There are a number of possible routes to exploring the Russian North from either Moscow or St. Petersburg. One approach is to start in Karelia with a focus on the Island of Kizhi in Lake Onega, accessible from the regional capital of Petrazavodsk. From there one can proceed north by train to the historic town of Kem and then go over by boat to the monumental Savior Monastery on the Solovetsky archipelago.

Another approach is to go northeast by rail from Moscow via Yaroslavl (whose churches are among the glories of Russian art) and proceed to the regional capital city of Vologda. Volodga has an excellent regional history museum in its Kremlin and is well equipped to receive tourists.

From there you can explore major heritage sites such as Ferapontov Monastery (with the UNESCO listed frescroes by Dionisy) and the St. Kirill Belozersk Monastery, which are located near each other and are readily accessible by car. From Vologda one can also visit the fascinating towns of Totma and Veliky Ustiug.

For those interested in exploring the northern landscape in a traditional setting, I can recommend Kenozero National Park, in Arkhangelsk Province. They have a helpful English language site for visitors. These are just a few of the many possibilities for exploring the Russian north.

‪Richard Wilson: What are the best villages/ small towns in Tver Region to visit?

William Brumfield: Tver Region is especially rich in historic sites. Two that stand out in my experience are Staritsa, picturesquely located on the upper reaches of the Volga River; and Torzhok, one of the centers of late 18th and early 19th century neoclassical architecture. Near Torzhok is one of the best restored grand country estate houses: Znamenskoe-Raek.

More information about Torzhok and Znamenskoe-Raek is available in my articles for RBTH. Also worth a visit are Kashin and Toropets. Of course this short list does not exhaust the possibilities for those with ample time and interest.

‪Edna M Opia what degree of Russian language do you have to speak to navigate yourself through these parts of Russia?

William Brumfield: In the remote areas of the Russian north, which have some of the best examples of traditional crafts and architecture, a good working knowledge of Russian is strongly advised. But visitors will find English language resources in more accessible sites such as Vologda, Kirillov and Velikii Ustiug — all of which can provide services for those with a limited command of Russian.