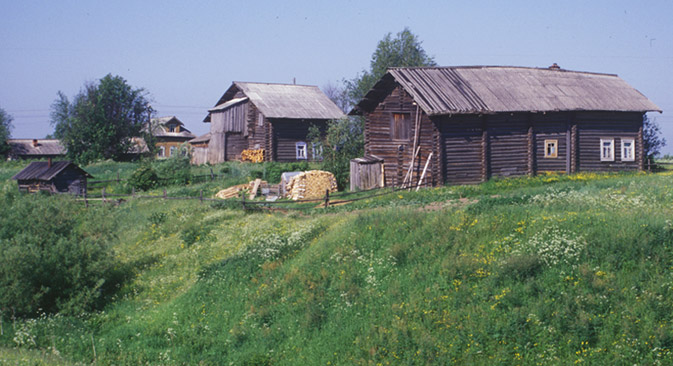 The wooden churches and houses of the remote Russian North speak to a more prosperous past.

The Northern Dvina River, from its origins at the town of Veliky Ustiug to its mouth near the port city of Arkhangelsk, is not one of the world’s major rivers in terms of size and length.  However, its importance for Russia has been exceptional.

During the 16th and 17th centuries, the Dvina River, which empties into the White Sea, was Russia’s main outlet to the West. At this time the entire White Sea area was linked by rivers, lakes and the sea into one of the most powerful trading networks in Russia.

In the early 18th century, the significance of the Northern Dvina diminished as Peter the Great commanded his merchants to use the new capital and port of St. Petersburg. Nevertheless, the Dvina continued to play a crucial role as a transportation artery for an area that had few roads.

During the 19th century, the Northern Dvina sustained commerce among towns along its banks and along tributaries such as the Sukhona and Vaga Rivers. By the beginning of the 20th century, this modest prosperity could be seen in spacious merchant houses built in river towns such as Cherevkovo, on the left bank of the Dvina some 300 miles south of Arkhangelsk.

The earliest documented reference to Cherevkovo dates to 1519, although the village probably existed long before then. Like many other northern settlements, Cherevkovo was raided in 1613, during the early 17th-century dynastic crisis known as the Time of Troubles.

Cherevkovo quickly rebounded later in the century, however, since it was favorably located to connect the inland grain fields with river trading centers such as Veliky Ustiug to the south and Kholmogory to the north. During the 18th century, the village became a center of gold embroidery, which flourished in the nearby Solvychegodsk, the center of Stroganov artistic culture.

A symbol of Cherevkovo's status during the 18th century was the construction in the late 1720s of the brick Church of the Trinity, which replaced earlier wooden churches. This imposing edifice, with a tiered tower over the center, had extensive wall paintings on the interior.

The Trinity Church was ruthlessly vandalized in the 1930s and there were later attempts to raze it entirely. Miraculously the basic structure, including the central tower, has survived. Although unrestored, the Trinity Church remains the town's central landmark.

Contemporary Cherevkovo (population around 1,000) also has impressive examples of merchant houses, built of wood and elaborately decorated with carved facades. Of special note are houses built at the turn of the 20th century by members of the extensive Gusev family. The skill of their anonymous carpenters was remarkable, yet the condition of these houses continues to decline for lack of constant maintenance.

Other landmarks in the area include the Church of St. Nicholas located to the north of Cherevkovo in the village of Yagrysh (also known as Ignatovskaya) near the small Avniuga River. Begun in the late 18th century and completed in 1821, this large church was an indication of the region's prosperity.

It, too, was sacked during the Soviet period and used for various purposes by the local collective farm. Its size makes it an unlikely candidate for restoration in an area of declining population.

Just to the south of Cherevkovo is the village of Sakulinskaya, site of the wooden Chapel of St. George. Built in 1875, this small chapel is distinctive for its bell tower, raised on four stout posts and attached to the west. Restoration is urgently needed to preserve the structure.

The most important heritage site to the south of Cherevkovo, however, is the ensemble of two churches at Permogorye, a village mentioned in documents as early as 1379. Both churches – one of wood, one of brick – tower above the trees at the edge of the steep Dvina River bank. From the inland road, the distance between the two is more apparent.

The closer of the two monuments is the brick Church of the Resurrection, built between 1748 and 1762. The design, with a bell tower in the west, is typical for the period. Indeed, the Cherevkovo Trinity Church bore a close resemblance to it before its deformation in the 1930s.

The church has two floors. The lower one, dedicated to the Nativity of Christ, is used for winter worship while the main, upper level space, with the Resurrection altar, was consecrated in 1775 as an unheated space for summer worship.

The extraordinary part of the Permogorye ensemble, however, is the wooden Church of St. George, built in 1665 and still standing with its three cupolas elevated on an elaborate cruciform platform. The platform is crowned with "barrel" gables, above which soar the cupolas. This highly unusual design has a later counterpart with five cupolas at the village of Nelazskoe, near Ustiuzhna in Vologda Province.

In 1875 the structure was covered in plank siding, a controversial move that may at least have facilitated the preservation of this magnificent wooden temple. The Church of St. George at Permogorye is a cultural beacon, a mark of the inexhaustible creativity of traditional architecture in the Russian North.