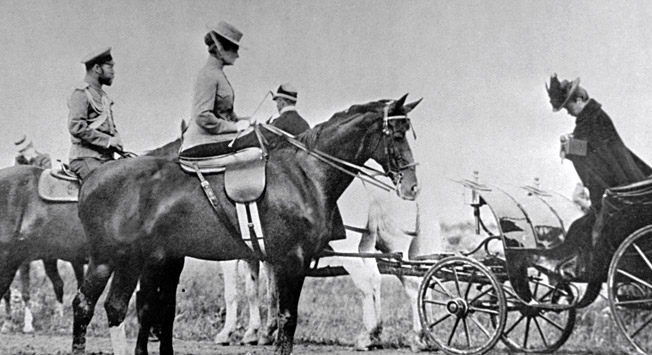 Ria Novosti
Nicholas II, the future Emperor and Autocrat of All the Russias was the first and only Tsar to visit Siberia and the Far East. Taking the journey several years before ascending the throne, Nicholas II covered approximately 51,000 km, including about 15,000 km of railway and 22,000 km by sea over about 290 days. After Peter the Great’s incognito fact-finding Grand Embassy tour of Europe in 1697-1698, a long educational trip became an important part of training Tsars-to-be for the challenges that lay ahead.

One major impetus for this trip was Alexander III’s (Nicholas’s father) decision to establish the Trans-Siberian Railway. He wanted a member of the royal family to be present for the opening ceremony in Vladivostok. This, of course, conflicts with some sources that suggest that Nicholas was considering traveling East to China and then through America and other claims that Nicholas’s father wanted to separate him from his lover, a ballerina at the Mariinsky Theater. What is indisputable is that the Romanovs wanted to use this trip as a spiritual mission to spread the Orthodox faith among new peoples and territories around the world.

The trip was planned by the general staff and the Holy Synod, the supreme governing body of the Russian Orthodox Church. The heir apparent embarked with an entourage on October 23, 1890 (old calendar) from Gatchina. His main companion was Prince Esper Ukhtomsky, a friend of the heir to the throne and official historian of the journey, but was also joined by his sickly younger brother, Grand Duke George. It was hoped that George’s health would benefit from the sun and sea air.

The delegation went first by train to Vienna and then Trieste where they boarded the warship, The Memory of Azov. The next stop was the Greek port city of Piraeus where Nicholas met his uncle, King George I of Greece. The King’s son, Prince George of Greece and Denmark, joined the delegation here. They went next to Egypt, with Nicholas and much of the crew touring the Nile and the pyramids, while the ship passed through the Suez Canal.

From there they sailed to India arriving in Bombay on December 11. It was here that Nicholas’s younger brother turned back as he had become ill. While in India Nicholas visited many of India’s main sites including the Taj Mahal and the Golden Temple. He met with rajas, went hunting, but was largely unsuccessful (whereas two princes that accompanied him bagged a tiger each), and bought numerous artworks, many of which can be found today in Russian museums. It was said that the future Tsar did not enjoy India as the heat was intense and he couldn’t stand the sight of British redcoats, reminders of Russia’s strained relations with Britain. The Indian portion of the journey culminated with a visit to the island of Ceylon, where one of the highlights was a show featuring 30 to 40 elephants and “devil dancers”.

From there, the journey continued on to Singapore, where according to local accounts Nicholas’s visit created quite a stir. Then it was on to today’s Indonesia and Thailand, where Nicholas spent a week as a guest of King Rama V. Afterwards he made a port of call in China.

It was in Japan that perhaps the most notable event of the journey took place. Nicholas greatly enjoyed his first days on the island, buying handicrafts and even getting a large tattoo of a dragon on his right arm.

He was warmly received, as the Japanese were interested in bettering relations with Russia. However, on April 29, in Otsu, he was attacked by Tsuda Sanzo, a policeman assigned to protect him. Sanzo took a stab at Nicholas’s face, leaving him with a 9 cm scar on the right side of his forehead. The second thrust was blocked by his cousin’s cane. His life was never in danger.

Theories vary although xenophobia is largely considered Sanzo’s motivation. The Emperor rushed to meet the future Tsar. Japan was no match militarily for Russia at the time and feared provoking the government into war. Three Japanese princes accompanied Nicholas as escorts as he left.

The entourage arrived at Vladivostok on May 11 and after commencing with the official ceremony, they left the Memory of Azov behind and traveled overland and by riverboat through all of Russia. They first went north stopping at Khabarovsk and then on to Blagoveshchensk, where an enormous arc dedicated to the visit still remains (commemoration arcs still stand in many of these cities). Next on the itinerary were the Eastern Siberian cities of Nerchinsk, Chita and Irkutsk.

He next arrived in Tomsk. This visit is clouded in secrecy, as even Ukhtomsky, the chronicler, is uncharacteristically silent on what Nicholas did in the evening. Rumor has it that he secretly visited the cell of Theodore the Elder, a mystic that mysteriously arrived in Tomsk in 1837. Some believe that Tsar Aleksandr I faked his own death in 1825 to escape his fate, before reappearing years later as Theodore.

From Tomsk, the journey continued to Surgut, Tobolsk, Tara, Omsk and Orenburg, before returning to St. Petersburg by train.

In many ways this trip was more important for what it brought the Russian interior. For example, the future Tsar spent one night in Tomsk and yet it received funds for Tomsk Polytechnic University and the opening of a spiritual academy in the coming years. A monastic workshop there received orders from the Imperial Court for the next 20 years. It seemed that whatever the Tsar touched was gold, at least on this trip.