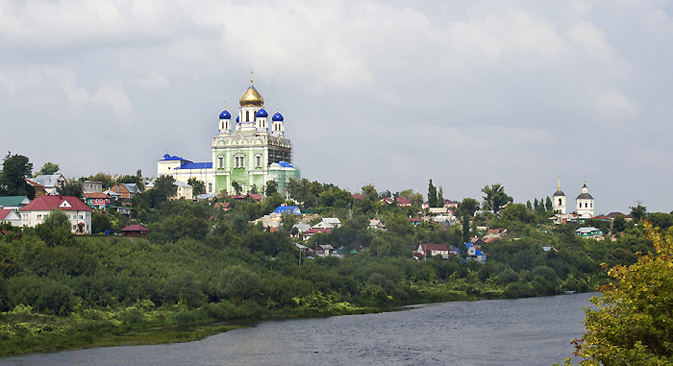 Aided by its picturesque natural setting on the Bystraya Sosna River, the charming scale of historic Yelets makes the town an attractive destinations for visitors.

Located some 230 miles southeast of Moscow in the rolling landscape of Lipetsk Province, Yelets is one of those Russian towns who peaceful appearance belies an often turbulent history.

There are various dates proposed for the origins of Yelets (the earliest is 1146), but the first verifiable documentary evidence appears at the end of the 14th century. In 1395, Yelets was among the southern settlements razed by the great conqueror Tamerlane during his decisive defeat of the Tatars of the Golden Horde, who were based in Sarai on the lower Volga.

Grim confirmation of Tamerlane's devastation of Yelets was found in 1801, when a mass grave of victims was uncovered.

Despite their defeat by Tamerlane, the Tatars remained a threat to Russia's borderlands. In 1414 Yelets was sacked by a Tatar raid and largely abandoned.

The settlement revived in 1591 as one of the fortified points established on Muscovy's southern frontier during the reign of Fyodor (r.1584-98), son of Ivan the Terrible and the last tsar of the Riurikovich dynasty.

To get to Yelets take the daily train from Moscow (Paveletsky or Kursky railway station; travel time 8 hours).

Even after the founding of the Romanov dynasty in 1613, Russia continued to be threatened by foreign armies. An invasion by the Polish-Lithuanian kingdom in 1618 included a large force of Zaporozhian Cossacks who overwhelmed Russia's southern defensive perimeter.

The capture of Yelets in 1618 severely weakened Muscovy's position, but the invaders were unable to take Moscow itself.

With a return to relative stability under the Romanovs, the rich agricultural lands of the Yelets region led to a revival of the town as a center for grain trade. Devastated by a major fire in 1769, Yelets was rebuilt on the regular plan adopted for provincial centers during the reign of Catherine the Great.

During the 19th century, the town's prosperity was reflected in the construction or rebuilding of a number of churches. The largest is the Ascension Cathedral, designed by the prominent architect Konstantin Ton and built between 1845 and 1889.

Closed and vandalized in 1934, the cathedral was reopened in 1947. Its magnificent interior, designed by the Moscow architect Alexander Kaminsky, has been well restored.

Prominent in the center of town is the Church of Archangel Michael, whose present form dates from the 1860s. Although still unrestored, the structure plays an imposing visual role at the summit of one of the town's central streets.

The church was lovingly described by writer Ivan Bunin, who spent much of his childhood in the village of Ozerki near Yelets, in his autobiographical novel The Life of Arseniev.

One of the most picturesque architectural ensembles in Yelets began in 1882 with a neo-Byzantine chapel designed by Alexander Kaminsky and dedicated to the memory of Tsar Alexander II, who was assassinated by terrorists in March 1881.

In 1909, local merchant Alexander Zausailov gave funds to erect a church commemorating the visit of Grand Duke Michael Alexandrovich (1878-1918), grandson of Alexander II and brother of Nicholas II. Dedicated to Saints Michael of Tver and Alexander Nevsky, the church was built behind the original chapel and consecrated in 1911.

Shortly thereafter, Zausailov provided support for an orphanage to commemorate the tercentenary of the Romanov dynasty. Placed to the north of the church ensemble, the orphanage was brightly decorated with ceramic tiles.

To the north of central Yelets is the Convent of the Icon of the Virgin of the Sign, imposingly located on Argamakova Hill, site of the town's original fortress. Originating in the 17th century, the convent endured severe trials, including its formal closing in 1764 as part of Catherine II's reform of monastic institutions.

Nonetheless, the convent survived until the Soviet period, when it was almost entirely destroyed. An active campaign has led to the rebuilding of the destroyed cathedral and bell tower, as well as a dramatic wooden chapel.

At the turn of the 20th century, the flourishing economy of Yelets led to the reconstruction of much of the central town.

In December 1941, Yelets was briefly occupied by the Wehrmacht as part of the southern flank of the Battle for Moscow. German forces were driven back almost immediately in a highly successful counterattack.

The region was again threatened by the German offensive in the summer of 1942, but the Soviet victory at Stalingrad eliminated further danger.

Today Yelets (population 106,000) is working to preserve the historic core created during its days as a prosperous market town. The town has also constructed a sensitive monument to Bunin (1870-1953), who became the first Russian to win the Noble Prize for Literature in 1933.

Aided by its picturesque natural setting on the Bystraya Sosna River, the charming scale of historic Yelets makes the town an attractive destination for visitors.