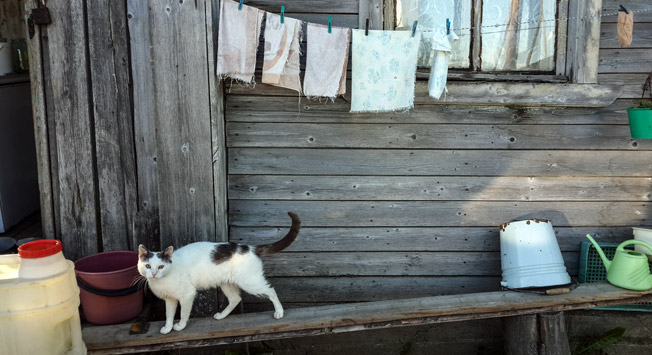 Kirill Samurskiy
The weather forecast promised rain for the entire week, but you cannot give up on a scheduled endeavour, even when it means getting soaked to the bone. And getting wet would be problematic: I was to travel by bus. At the same time, I would get to know Russia. For where better to observe the Russian people than on buses?

If you examine the schedules of bus routes around the country, you realize that, in principle, you can get anywhere from Moscow, as long as you have the will and the money for the ticket. The route of my journey was as follows: Klin—Tver—Veiliki Novgorod—St. Petersburg—New Ladoga—Olonets—Petrozavodsk.

We left Moscow surprisingly quickly and arrived in Klin on schedule. The town’s proximity to Moscow is reflected in its daily rhythms: it is noisy, there is jostling on the road and nervousness in the air. Much has changed from the time when Tchaikovsky rented a house here, but that house is still standing (they say that during World War II, some educated Germans wrote “Here lived Tchaikovsky” on the building, and so the monument survived). Behind the revived church and the old shopping arcades there is a museum dedicated to fir wood toys and a factory, the oldest in the country. At the factory they say that they were the first already in the nineteenth century, and now competitors are hunting for their production secrets, which is why photography is forbidden in the shop (which is incorporated into the museum exhibit). Recently the factory put up a new building, which compactly houses the museum, the production facilities, and a store.

Next: Tver, where I would spend the night. But there is no direct connection between Klin and Tver. So I got on a bus to Bezborodovo, a village that is about halfway between the two cities. I arrived in an hour, but can the schedule be trusted? The information displayed at the bus stop is completely different. Oh well, I waited and hoped that the Internet did not deceive me. An hour and a half later, a mini bus arrived, and although it wasn’t quite the bus I had been expecting, I got on—waiting for the actual bus could drag on indefinitely. As we drove to Tver, it starts raining heavily—I lucked out. Tver turned out to be a very nice city, whose pre-Revolutionary wooden architecture has been partially preserved. But finding a decent hotel proved problematic. Prices started at 2800 rubles, for which you would get a perfectly ordinary Soviet-style room in an ordinary Soviet-style hotel whose rooms are permeated with the perfectly ordinary smell of dichlorvos. So I had to stay in a renovated Soviet hotel for 3800, which included breakfast and very thin walls, which, coupled with the ever-flying military aircraft overhead (up to 10 an hour) imparted a sense of the fragility of mental health. As a tourist bonus I got a walk through Morozov Town, the housing block of the Tver Manufacturing Company. The manufactory’s dormitories are in a completely pre-modern style - very original and stylish. Most of the dormitories are still inhabited. Here you could shoot a film about the revolutionary struggle of 1917.

From Tver to Veliky Novgorod there is only one bus that departs at 11am and has an 8-hour travel time. This was the longest stretch of my route, and this time I needed my passport to purchase a ticket. The bus was full and we started down the Leningrad Highway. Most people were heading to cities along the way—Vyshny Volochek, Torzhok, Kresttsy. The scenery is very beautiful, especially along Lake Valdai. Out of all the passengers who got on at Tver, I was the only one who remained on the bus all the way to Veliky-Novgorod. Despite the terrible traffic jam we sat in for 2.5 hours, covering a distance of only 10 kilometers (and all of this because of a traffic light in Vishny Volochyok), we arrived right on schedule. And again, it only rained while I was on the road.

Lord Novgorod the Great is, of course, very different from the small towns along the way. And although I only had one evening to walk around the city, I certainly got a sense of its former greatness and extraordinary openness. Where else can you simple walk into kremlin in the late evening and stroll among the ancient stones? And oaks, 300-400 years old? Unfortunately, many of them have left only their stumps, but even they leave an impression. My hotel was near the guard tower, a privately owned mini-hotel.

The trip to St. Petersburg was probably the most boring. A ramshackle Chinese bus, broken seats, and impeded traffic on the way into the city on the Neva—those are all the impressions I got.

The sunny day suddenly gave way to pouring rain and I had to postpone my white nights walk. The second half of my route lay ahead. The ticket for Nova Ladoga can be purchased either at the bus station ticket office, or online. But if you buy it in advance, the ticket is more expensive: you pay for the pre-sale (here I was quite surprised). The bus depot in St. Petersburg proved to be the most protected: there are gods, metal detectors, and policemen. And only 3 of the 8 ticket windows were working. No enemy shall pass!

Initially I wanted to go to Staraya Ladoga to see the remnants of Russia’s oldest fortress and the kurgans of ancient Vikings, but it didn’t work out. The bus schedule did not fit my tourist itinerary. So I end up in Novaya Ladoga by accident. I ate fish and conversed with a fisherman. He lamented the fact that life is difficult. It used to be better: the shipyard was operational and there was fish. But now the seals have multiplied and are eating all the fish. Killing seals has been banned, and now they’re eating all the fish. We have to kill some of them off, or else we’ll be left with no fish at all.

Getting on the bus to Petrozavodsk in the village of Yushkovo is tricky: if there is no space, the bus simply does not stop. But I am lucky, although I had to stand for 20 kilometers until we reached the next stop, where people get off and seats free up. They cut the tickets with scissors (a scale with numbers—something you cannot fake) in accordance with the tariff—how amusing. Where before the landscape beyond the bus windows changed quite frequently, now it’s just a ribbon of road with walls of trees on either side. To my surprise the roads were good, you can even sleep on the bus, resting your head on the glass without getting bruises. On the way I decided to stop in the town of Olonets. It is notable in that it is one of the oldest towns in Karelia. But unfortunately there is nothing left of the fortress, seeing the Cathedral of the Icon of Our Lady of Smolensk takes 20 minutes, and there were no rooms in the hotels. The streets of Olonets were deserted; a man was sleeping at the bus station. The bus from Petersburg to Petrozavodsk was due to arrive at 11pm, leaving me with 4 hours to kill. I decide to go down the Lake Onezh, and I caught a ride. The driver, Ivan, was a farmer, out distributing milk to his customers. And so instead of at the lake I wound up at a farm.

Ivan breeds cows, pigs, and sheep. After the dissolution of his collective farm in the ‘90s, he bought a cow. Now he has 20 of them, and he’s wondering how to sell them and begin farming. He says that he wants to keep bees. He treated me to dried and boiled smelt with potatoes. For the first time since my childhood I drink fresh milk. I got ready to leave for the bus, but Ivan and his wife suggested that I spend the night. Like in a fairy tale—they gave me food and drink and laid me to bed. And the village was beautiful—with hanging wooden bridges. Wonderful people live in Russia. I want to stay, but I have to go on. It’s a two-hour trip to Petrozavodsk.

The bus left as scheduled. We went down a straight and even road, the setting summer sun hung in the windshield. Sixty kilometers out from the city we found ourselves in a traffic jam: road repairs. But the driver easily made up for the 20 minutes we lost once we got going again. I arrived in Petrozavodsk at 1am.