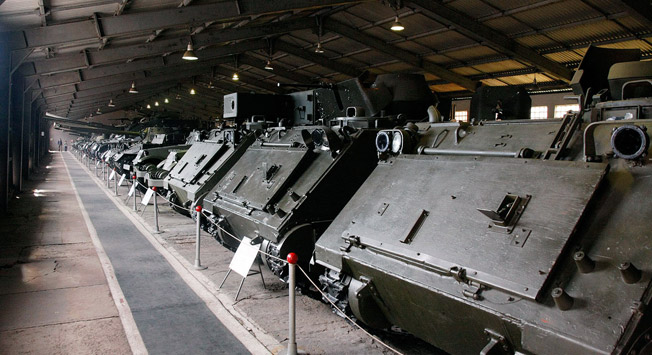 Nikolay Korolev, RBTH
After the dissolution of the Soviet Union, the museum has become accessible to all visitors, both Russians and foreign. The main collection of the museum consists of weapons from the First and Second World Wars, but there are also examples of post-war technology and equipment manufactured by different countries. The museum’s collection includes more than 300 specimens from 14 countries, 60 of which are the only existing examples of their kind. Because its exhibits are so unique, this museum is considered one of the world’s major tank museums.

Afterwards it is better to return to Moscow. To date, the primary activity of the museum is the search for and restoration of various military equipment. Moreover, all of the museum’s machines have been restored completely. The specimens of the museum have been used in film shootings, military parades and battle reconstructions.

On the right side of the main entrance under the open sky are several tanks from World War II. These are the English infantry tank MARK III “Valentine” and the American light tank M5AI “Stuart,” which were supplied to the USSR through lend-lease, as well as the Soviet tanks: several modifications of T-34 with self-propelled SU-152 guns, which proved itself during the fight with German heavy tanks “Tiger” and “Panther” and thus received the name “Deerslayer.”

The next pavilion is “Light Tanks of the Soviet Army and Equipment of the Airborne Troops.” Here it is worth paying attention to the first Soviet light tank, MS-1, from 1927. By 1931 over 900 of these tanks had been built. They performed well in battles in the Far East during the late thirties.

Next walk to the pavilion “Medium Tanks and Major Tanks of the Soviet and Russian Armies.” These tanks include the renowned T-34 from World War II and the T-80, which is part of the state arsenal of the modern Russian army. Here you can also see prototypes of secret military equipment from the Soviet Union. For example, there is an experimental rocket tank “Obyekt 288” with gas turbine engines.

Next go to the pavilion “Heavy Tanks of the Soviet Army.” The main attractions of this pavilion are two self-propelled guns: SU- 14 and SU-100-Y. These were prototypes from World War II, but they did take part in fighting during the defense of Moscow. Afterwards, they became exhibits at the museum. Because of their size and the difficulty of transporting them, these machines were discontinued. Two SU-14 guns were released, one survives to this day, while the other was scrapped for metal in the 60s. Only one SU-100-Y was released and it can be seen in the museum today.

Other countries are represented primarily by post-World War II specimens. There is even an exhibit from China. A particularly interesting exhibit presents French armored tank forces. At the entrance stands the very first light tank, FT-17, which was created by Renault in 1917. An interesting feature is its wooden wheels. It is also the most massive light tank manufactured at the start of the 20th century. From just 1917 to 1918 the company Renault produced 3177 tanks. Following the end of World War I, the tank was manufactured under license agreement in the United States, Italy, the Soviet Union and Finland. The FT-17 was in service in armies of different countries until the beginning of the 1940s.

A separate pavilion displays Germany’s armored vehicles from World War II. This is the largest collection of German military equipment and technology from that time. Here it is possible to view the only specimen of the super-heavy tank “Mouse” (Porsche-205). The development of “Mouse” was led by Ferdinand Porsche himself. In total, two prototypes were created. Both “Mice” were used in fighting against the Soviet army in 1945. During the battle, German commanders decided to blow up both tanks so that they wouldn’t fall into the hands of the Russians. But the Soviet army still managed to obtain one tank, even though damaged, as a trophy for their troops. It was restored and moved to the museum.

In the exhibition you can also see one of seven self-propelled mortars “Karl,” with the nickname “Adam.” It was used among German troops on June 22 1941 during the invasion of the Soviet Union from the South. Adam managed to shoot four rounds before it broke and was sent to Germany for repairs. After repairs it was brought to Poland to be demonstrated for Mussolini. There, Adam was later captured by Soviet troops. Adam is the only one of the seven units that has survived to this day.

Conclude the museum visit with the pavilion “Equipment from Great Britain, Canada and the United States.” The series of exhibits of British armored equipment and tanks emphasize the MK-V, used during World War I and the civil war in Russia. Among the interesting Canadian exhibits is the half-track snowmobile B-2 from 1936, which has a body made of plywood. Among the equipment of the United States, pay attention to the medium tank M-3 “Lee,” developed in March 1941 and transported to the Soviet Union through lend-lease. British troops used the M3 for the first time in May 1942 in Northern Africa. Because of its decent combat armor and high-power artillery, it was the only type of British tank that could withstand attacks from German tanks. From July to August 1942 near El Alamein, M3 tanks were called the “Egyptian Last Hope.”

On the museum territory (cafe, souvenirs) it is possible to pay only with cash.

Every pavilion has a plaque with a QR code, which can be photographed to access the pavilion’s free audio guide. The museum also has free WiFi, and to connect to it you must ask for the login information. You will first be offered an audio guide for extra-charge, but do not settle. Why pay more. The museum also has guided tours, but they must be booked in advance.