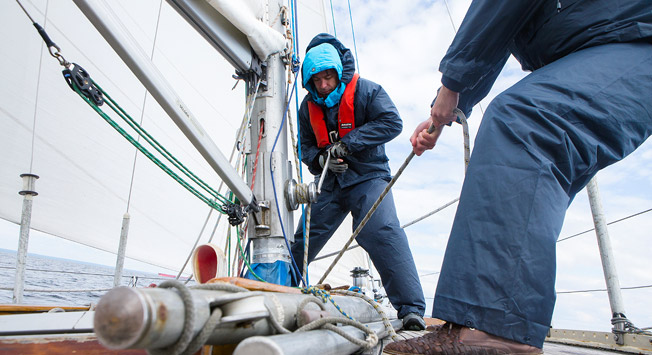 Grigory Kubatian
I have a striped shirt and naval binoculars, inherited from my grandfather, a captain, but I myself am not a sailor. Yet when I was invited to participate in a sailing regatta as a journalist, I was delighted. I was brought to a real naval regatta and boarded the yacht “Rus,” which belongs to the nautical school. “At the same time I will learn,” I decided, pulling on waterproof trousers and a jacket and placing extra sweaters in a bag. The weather was warm and sunny, but anything can happen at sea.

And so here I am sitting in the main cabin of the yacht, drinking tea with the captain, a real seaman. The captain of the “Rus,” Andrei Andriyainen, had sailed more than fifty thousand nautical miles, which is similar to going a little more than twice around the equator.

“Let’s not think that the sea is not scary. Still it’s scary!” the captain said. The Ancient Greeks believed that there are three types of people: the living, dead and those who are at sea. It is most important not to panic, but do your job. Most people associate yachts with white boats floating next to the pier, champagne, and blondes in bikinis. But this luxury life is possible only on land and it doesn’t apply to reality. Sailing trips teach you to act responsibly at sea.

Altogether Andrei, who became a yacht captain 25 years ago, has spent 2.5 years directly at sea. To understand what that feels like, try going on a sailing trip even for just a week! However, I was going to sea just for a few days, and such a small trip shouldn’t be too daunting.

At 1 p.m. the yachts lined up at the start, a signal siren sounded and the multi-colored domes of sails, swaying and creaking, set out.

The “100 Mile Cup” is considered a historic race. The first sailing regatta on the Kronstadt - Nerva Island - Kronstadt route was held here more than a century ago, beginning in 1852. Moreover, the current race is organized by the Federation of Yachts class L- 6, which itself is historic. These yachts were built commercially in the USSR in the sixties and seventies. They are not the fastest, but are study and can travel the seas in rain or shine. Only a few dozen of these yachts are still operational. These sailors, floating on the “Six (Shesterki),” are usually middle-aged and older. Having different, including more proper, circumstances, they chose domestic boats out of nostalgia. In contemporary Russia sailboats are not built commercially, and novice sailors can buy boats of foreign origin.

Indeed, the conditions of the race were quite democratic. Participants included all single-masted yacht owners, with boats similar to the “six” class. Before the start of the regatta at the roadstead near the Petrovsky Embankment, 30 yachts and around 200 team members gathered. Officials wished a “tailwind” and “seven feet beneath the keel” for the athletes, amusing the experienced sailors, who knew perfectly that the maximum speed of a yacht is not attained with a tailwind, but with a crosswind, while a two meter wave seven feet under the keel is enough.

“Rus,” which I had to travel on, has the same mast, a “Bermudan sloop,” as the “Six” class ships, but was made instead in Socialist Poland. The famous Polish sailor Krzysztof Baranowski sailed around the world on a similar boat in 1972. On the way from Africa to Australia during the “Roaring Forties” latitude points, his yacht “Polonaise” was overturned by the wind a few times, and his electric instruments flooded with water and did not function. Nevertheless, the sailor did not lose his fortitude and successfully completed the journey.

Lookouts were set on the “Rus” at the genoa staysail -- a fore and aft rig. It was slightly less than what was necessary, but still fulfilled its task. The speedometer showed four knots. A knot is one nautical mile per hour, so our speed was a little more than walking pace.

“It’s likely to be a calm race,” suggested the captain. The whole crowd did not overtake us, but we could step aside and stay on a parallel course. Suddenly, the wind moved to the other side? The sails fluttered suspiciously, and the captain explained that the yacht “Maria” sailed upwind from us, and we had landed in her exhaust wind. It seemed that “Maria” travelled fairly far away from us. But sailors have a relationship with the wind: they are like family. The connection is full of passion, affection, conflict, betrayal, and, as it turns out, even jealousy.

Our team consisted of 11 people, mostly students and graduates of the naval school. Someone was already an experienced sailor, while the others were beginners, like me. The captain pointed to the fluttering threads on the sail and explained that they were “koldunchiki” to help set the sail in the wind. White tips on the sea show the line of the wind. But in general at sea the wind is most important.

We passed the Tolbuhin lighthouse. This is one of the oldest lighthouses in Russia, it is three hundred years old and was founded by decree of Peter I. Decembrist Nikolai Bestuzhev once wrote a romantic story about this quaint gray lighthouse. In this story he mentions how robbers in bad weather would light fake lights in order to cast ships ashore so they could be robbed, while surviving sailors would be sold into slavery. This Decembrist also wrote about the seals “Thunderbirds,” darting on the Gulf of Finland. Just in case, I peered into the depths of the water -- did I not see a seal? But there was nothing much to see. Whether the storm was expected, or from the time of the uprising at the Senate square, all the seals in the Baltic have been caught.

We tacked first in the direction of Stirsudden lighthouse and the northern shore of the bay. A tack is a direction. Upwind boats can only move with tacks -- left-right, zigzag. Stirsudden is another highlight of the Gulf of Finland. This red and white painted lighthouse was on Soviet stamps in 1983, stamp collectors might remember. But it is known primarily for the fact that in the surrounding area Vladimir Lenin hid from the tsarist police with his wife and mother-in-law. His colleagues jokingly call Stirsudden a “beacon of revolutionaries.”

Near the northern shore the wind has noticeably increased, jumbling all the maritime terms in my head. The genoa staysail was removed and instead a bright orange gennaker was put in its place, and the boat tacked at the next lighthouse -- Shepelevsky. A gennaker sail is a cross between an oblique genoa sail and a convex parachute spinnaker that is used in a tailwind. The boat tipped and picked up speed, and started pitching. It began to rain, and waves washed onto the deck. The Koldunchiki threat, instead of gracefully waltzing began to dance a crazy jig.

After sitting up on deck for a while, I felt dizzy and went down into the cabin. This was a mistake: seasickness is easier to manage on the deck -- and the breeze is blowing, in which case it is more hygienic. Hygiene and safety are the most important on a ship. The boat raced at a speed of eight knots while strongly inclined. A pendulum appliance on the wall near the navigator’s table showed the gradient of the heel as 20 degrees. I walked down the cabin aisle bent, clinging to anything, just so I would not fall. A plate of cookies placed on the table in front of me immediately moved to the side. However, when you face seasickness, eating is not desirable. To stay on the bed it is necessary to hang on to anything with your feet and hands. Only one kettle on the stove kept its proud resistance. The yacht cooker is mounted on moveable hinges and the teapot is always hanging parallel to the ground. Moderate waves on the ocean from within the vessel’s wooden cabin feels like God knows what, especially when you are new to the sea.

The wind became even stronger. Someone said the word “squall.” The boat desperately creaked and heaved. Lookouts, dressed in yellow waterproof suits, like fishermen in an English trawler, courageously fought the flapping sails. Because of the wind and heavy winds, nobody could hear each other, so I had to shout. The atmosphere was like in pirate movies.

I also wanted to do one thing -- assume a horizontal position. But it was impossible to lie down: when changing course, the boat would begin to tilt to the other side, and I would be dumped out of the bunk. The arrow of the “inclinometer” on the wall reached the 25 degree mark.

Yet somehow I managed to fall asleep, covered with a sleeping bag. Nearby in the next bed the captain dozed. For experienced seamen it was not even a storm, but an easy trip. However, agitated young sailors came at night to wake the captain. Because of the strong winds none of them could remove the huge gennaker and replace it with a compact storm sailor. The captain helped the sailors and returned to sleep.

In the morning there was a lot of talk about last night’s events. The fact that they barely missed the “Flying Dutchman” boat that lacked identification lights. Perhaps one of the opponents shut off its electricity? Well, before the danger of collision, one member of the oncoming boat’s team guessed and lit the sail with a flashlight.

During the night we had to go around Nerva island and go in the opposite direction. According to the lookouts, the control point is a small island with old barracks that smells strongly of fish nearby. Nerva is located just 20 kilometers from the Finnish border. Once the island belonged to Sweden, but three centuries ago in accordance with the Nistadt Treaty it was given to Russia. After the revolution it was taken by the Finns, but was returned during the Russian-Finnish war, and in 1939 the Soviet flag was raised over some local barracks. Since then, all the fish around Nerva is ours.

During the race the sails were changed about ten times, but if there is no wind, like rags they are not changed -- the speed does not grow. In general the situation was tranquil, as is expected after the storm. Even the sobering “koldunchiki” on the sail depicted a solemn minuet.

We just missed a gigantic container ship, one that looked like a sea monster, and tacked back towards Kronstadt. The closer to the end of the race, the clearer the sky and brighter the sun became. Before the finish the sail resembled a pleasant cruise. The team relaxed, and on the horizon white flags appeared as we caught up to the other sailboats.

It seemed as though as we neared the finish we were seventh. Going into the narrow gate between the judge’s ship and the finishing buoy, the sails were lowered and the motor that was forbidden during the race was started in order to maneuver into the harbor. At the same time just behind the finish line we decided to pick up and tow another yacht, whose motor was broken. These sailors still and will always help each other.