Fairy tale castles and picturesque lakes within a stone's-throw of St. Pete 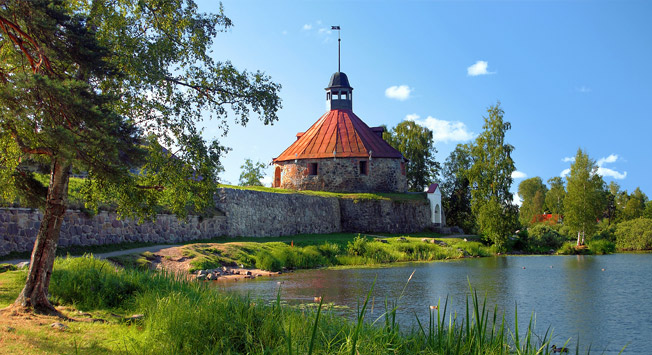 Lori Images, Legion Media
In St. Petersburg there is something for every interest and price range.

It is believed that the Korela Fortress was constructed in the 12th century, but no one truly knows when it was finished or who built it. The Korel tribes once lived here, after whom the fortress was named. The Swedes captured it repeatedly, and in 1721 Kexholm (the Swedish name for the fortress) was transferred to Russian rule. Now near the fortress there is an interesting museum that tells its history. Visitors can also stroll about the fortress grounds, visit the Round Tower, look at tanks and artillery pieces from the Second World War, and, for an additional fee, fire a cannon.

Staraya Lagoda, an ancient village located in the Leningrad Oblast, was once one of the ten largest Russian cities. It was from here that the Russian land “sprung forth.” The village itself still exudes antiquity to this day: pilgrims slowly traverse up the Malyshev mountain, a boatman ferries villagers across the Volkhov river, the remains of heroes of the past rest in ancient burial mounds that seem to protect a holy land. Varyazhskaya Street probably still remembers the footsteps of the ancient Scandinavians. From here soldiers marched to battle with the Swedes during the time of Alexander Nevsky, as well as during the Great Troubles and the Northern War.

In Staraya Lagoda an ancient fortress stands on the high and steep bank of the Volkhov with several other old churches beyond it. In addition to this, there is a holy spring beside the Church of John the Baptist, and quite nearby you can find the Staray Lagoda grottoes. You can enter the grottoes on the lower slopes of the Malyshevoy Mountains.

The mini city of Andersengrad is a place where fairy tales come to life. Erected in 1980, Andersengrad is a miniature replica of a European town from the 16th-19th centuries. Visiting the town is an excellent way to spend a day off with the children or even with a group of friends. This magical city built in a medieval European architectural style includes a miniature castle with turrets, ramparts, fountains, and red walls, as well as a wide variety of the famous storyteller Hans Christian Andersen’s heroes for inhabitants. At the entrance to the town you will be met by The Little Mermaid, and within the town itself you can see the tower of tin soldiers, Ole Lukøje’s house, and other buildings that are in one way or another connected to the writer’s fabulous world.

The estate in the village Rozhdestveno lies on a hill at the village’s center. This estate is associated with Vladimir Nabokov- his mother, born Rukavishnikova, grew up there. The estate changed many hands prior to falling into the possession of the Rukavishnikov family. In 1916, the house in Rozhdestveno went to the future famous writer Vladimir Vladimirovich Nabokov, but in 1917 the revolution forced the Nabokov family to flee Russia. After their departure, the building was nationalized.

On the outskirts of the Lopukhnika village in the Lemonosovsky region lays a humongous ravine that is around several tens of meters deep. Along its bottom runs the small Ruditsa River. More than 100 years ago, a weir was constructed on the river to create a lovely lake. To this day, the lake excites the imaginations of tourists with its unusual color caused by high concentrations of the element radon.

The lake is characterized by its “wildness.” Here any person can feel like they are inhabitants of a place where no one else has ever set foot. The beauty of the pond and of the surrounding canyon, as well as the freshness of the local air, dips those who stray here into the world of virgin nature in the truest sense.

Directions: travel by commuter rail from the Baltiysky railway station to “Stary Peterhof” station (40 minutes travel time), and then take bus number 463 followed by any of the shuttle buses heading in the direction of either “Koporie” or “Globitsy” to Lopukhinka (10-15 minutes travel time).

Anyone who has been at least once to St. Petersburg has certainly peered into the city’s oldest food store on Nevsky Prospect that once belonged to a famous merchant named Eliseyev. However, few people know that the famous entrepreneur also had a magnificent manor house near St. Petersburg in the village of Belogorka. The house was built at the beginning of the 20thcentury in the National Romantic style (a form of Art Nouveau) and designed by the architect Tavlinov. Eliseyev himself did not initiate the construction project, nor did he manage it–his daughter Elizabeth oversaw the construction. After settling in Belogorka with her second husband (the family doctor of the Eliseyevs), she had to rebuild the manor anew, after which she constantly improved it to the end of her days.

There are no natural cave formations in the Lenoblast. The Borshchevskye as well as Sablinskye caves are artificial. They were once mined for quartz sand, which was used in glass factories. After 30 years of operation, the mining ceased, and since then the caves have stood empty. Gradually they collapsed, and the mineshafts have gotten shorter. In another 30 years time, unless they are cared for, they will disappear altogether. So, before it is too late, hurry to see the unusual red arches within the caves that resemble gothic architecture. Butterflies winter in the caves as well.

The manor complex of house Stroganoff-Golitsyn is considered to be one of the most magnificent of 19th century Russia. Sophia Stroganoff was personally involved in the interior decoration of the building: the ceilings were painted with grisaille, and the decorations were composed of sculptures, paintings, and bronze ware from the family home on Nevsky Prospect. This is how in these remote and rural parts appeared paintings by Italian, Spanish, and Dutch masters of the 17th century.