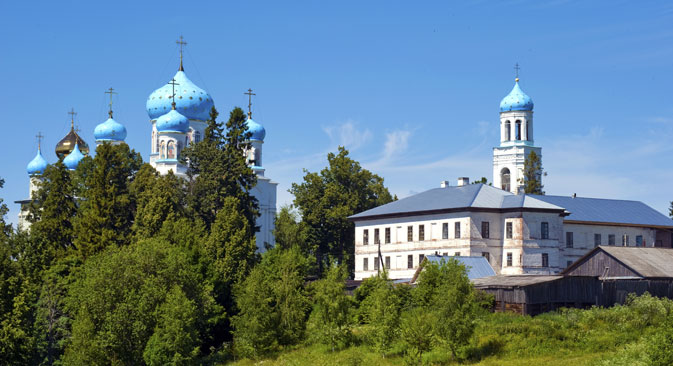 As a location of cultural landmarks, the Kostroma Region is less well known than the neighboring regions of Yaroslavl and Nizhny Novgorod. To the northeast of Kostroma, however, is a lake district that contains some of the most picturesque sites in the Russian heartland.

The center of this district is the town of Galich (current population around 17,000), located on the eastern shore of the lake of the same name. In the 10th century, the area was inhabited by a Finno-Ugric people known as the Merya. The settlement in its present location was established in the 1150s as part of the Slavic consolidation of power in the northeastern part of medieval Rus.

The name "Galich" likely comes from an older Galich located in the Kievan territory. Known for its production of salt, this ancient Galich might have derived its name from the Greek word for salt: halas. The Kostroma Galich was also situated in a rich salt-producing region of brine pools.

The earliest mention of Galich in medieval chronicles dates to 1238, when the middle part of the Volga River basin was seized during the Mongol invasion of 1237-41. The Tatars – as the Russians called the invaders – levied taxes, yet Galich succeeded in becoming the center of a medieval principality.

During the 14th century Galich drifted into the orbit of the Moscow principality, and in 1362 Grand Prince Dmitry Ivanovich (Donskoy) of Moscow claimed the Galich lands as part of his domain.

Although Galich today is a placid backwater, it occupied a strategic and exposed position during the 14th and 15th centuries as Moscow struggled to defend its evolving boundaries. In 1398, it was raided from the north by Novgorod forces, and in 1408 it was attacked during a devastating Tatar assault on Moscow.

Shortly thereafter Dmitry Shemyaka, the prince of Galich and grandson of Dmitry Donskoy, was involved in a bloody, extended series of conflicts among claimants to the Muscovite throne. The struggle, which also involved Tatar raids, lasted for most of the first half of the 15th century.

In 1450 the forces of Moscow's Grand Prince Basil II took Galich by storm, and Shemyaka fled to Novgorod. He died there in July 1453, apparently from eating chicken poisoned by an agent of Basil II.

Absorbed into Muscovite territory, Galich served for the next century as a barrier protecting Moscow's northeastern flank from the Tatars. That threat ended in October 1552 with Ivan IV (the Terrible's) conquest of Kazan, but further woes lay ahead.

In 1612, the town was sacked by a Polish raid during the Time of Troubles, another prolonged dynastic crisis. After the founding of the Romanov dynasty in 1613, Russia remained vulnerable to invasion, but Galich was no longer in a threatened position. The town gradually revived and was known as an important point in the lucrative Siberian fur trade.

Like many other provincial centers, Galich was substantially rebuilt to a regular plan promulgated by Catherine the Great during the late 18th century. Its active commercial life was gracefully reflected in a number of stuccoed brick trading arcades built in the early 19th century and reminiscent of a similar ensemble in the provincial capital of Kostroma.

Galich also witnessed the construction of a number of neoclassical houses in the early 19th century. Together with the trading arcades and a surviving fire station and tower, the Galich town center provides one of the best preserved examples of neoclassical city planning in provincial Russia.

The architecture of Galich's Orthodox churches suffered considerable damage during the Soviet period. A few monuments have been restored, such as the ensemble formed by the Churches of St. Basil the Great and the Presentation of the Virgin, both built in a decorative style during the late 18th century.

Most of the town's churches are still in a state of neglect, including the large Trinity Cathedral at the St. Nicholas-Starotorzhskii Monastery on the northern edge of Galich. Built in 1839-59 within sight of Lake Galich, the neoclassical cathedral is one of the largest extant churches in Kostroma Province.

In the Soviet period the monastery was converted to an industrial enterprise and its large bell tower (1894) was reduced to a one-story gate structure at the base. The cathedral now stands empty.

A more encouraging example of architectural restoration is the St. Avramy-Gorodetsky Monastery, picturesquely located on a high bluff overlooking Chukhloma Lake, 30 miles north of town. Founded in the mid-14th century by the monk Avramy (a student of St. Sergius of Radonezh), the monastery is being impressively restored and is easily accessible over a good road.

Despite economic challenges and a difficult legacy from the 20th century, the Kostroma lake district has made progress in reclaiming its cultural heritage. When combined with a beautiful natural setting, accessible roads and convenient rail links, the Galich region is developing into a hospitable destination for visitors.