Where the most beautiful women in Russia live: look South 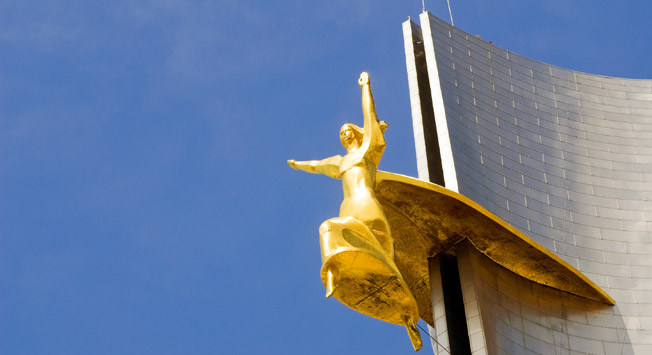 Lori Images, Legion Media
Rostov-on-Don is considered the capital of Russian beauties. The frequent victories of the Rostov Cossack women in beauty pageants have helped to secure the town’s fame for having the country's finest girls.

Even on the hottest days (and in the summer temperatures in Rostov-on-Don can reach 40 degrees C), the majority of girls rarely leave the house without makeup and high heels. The Don Cossacks, the dominant ethnic group of the Rostov area, have always been famous for their courage and independent spirit. Their women sometimes had to not only educate the children and do the housekeeping, but they also had to take up arms at times. More than 100 nationalities have intermixed on the Don River, including Russians, Armenians, Greeks, Georgians, Turks, and Jews. The southern sun and Rostov’s position at the crossroads of Europe and Asia gave rise to the original appearance and temperament of the Cossack women.

Rostov-on-Don is called the “port of five seas”, although you won’t find any sea here. The city received its name in the middle of the last century, after the construction of the canal that linked the Don River and the Volga, and thus immediately gave the city access to five seas, including the Azov, the Black Sea, the Caspian Sea, and the Baltic and White Seas.

Rostov-on-Don was founded as a city for the collection of customs taxes on imported goods into the Russian Empire from Turkey. As the times changed, diplomatic relations between Russia and Turkey were inevitably affected, and the customs city turned abruptly into a walled city.

During the early 20th century, the Southern city resisted Soviet power for more than two years, becoming one of the centers of the White movement. However, it then fell to the Bolsheviks, and from January 1920, the Soviets began their reign in Rostov.

During WWII, German troops occupied Rostov twice: in autumn of 1941 and the summer of 1942. The town was almost completely reduced to rubble, with theater buildings, institutions, schools and hospitals all being blown up and burned. Rostov-on-Don was among the ten Russian cities most affected by the war.

Built in the 18th century, the old town has incorporated the features of all the various nationalities living in it, including a synagogue standing side by side with mosques, and Greek and Old Believer churches next to Buddhist and Catholic churches.

The oldest building in Rostov is the Armenian Surb Hach (Holy Cross), which is part of the demolished Armenian monastery. Out of the entire monastery complex, which was a former spiritual and educational center of some importance (where the first printing house, school, and library operated in Southern Russia), all that remains is just one church, a picturesque stone staircase descending down to the spring and the Temernik River, and the massive stone pillars of the gate. A garden has been laid out around Surb Hach, which is carefully tended by vergers.

The most famous building in the city, Gorki Theater, is a masterpiece of constructivism style, as it is built in the shape of a giant tractor. The walls of the theater are made of marble and polished labradorite. World famous architects like Le Corbusier and Oscar Niemeyer dubbed the theater the “pearl of Soviet architecture”.

In areas located near the Don, many 19th century buildings with ancient gates, wrought iron canopies, and inner galleries are preserved.

Rostov-on-Don boasts two unique attractions that cannot be found, perhaps, in any other Russian city: murals and warehouses.

In the Year of the Defense of Children (1979), pedestrian underpasses in the downtown area were decorated with huge, detailed ceramic murals in the Soviet style. The murals narrate stories about Soviet childhood, labor, culture, animation and so on to passersby. The only other murals made on a more monumental scale in this style during the Soviet era, can be found in old Moscow Metro stations.

Paramonov warehouses operated according to specific designation until the end of the 1980s in the Soviet Union, and then repeatedly caught fire and were plundered for building materials.

This place, located on the bank of the Don has always had a unique feature, which the engineers Yakunin and Shulman took advantage of when designing the warehouse complex: springs flow from the riverbank with water temperatures at a constant +9 degrees C. Collected in gutters, the spring water created a natural refrigerating effect at the granaries, which helped maintain a constant cool microclimate.

The vintage chute collapsed together with the buildings, but the springs still flow. The water has been collected to fill the most amazing swimming pool in Russia.

Honestly, you won’t see this anywhere else. Inside the high brick walls, the purest water is contained. The summer sun warms it, and in the winter the spring does not freeze. Even along the walls of the bath green grass grows all year-round. The bottom of the “pool” is layered with white sand.

In addition to unique attractions in Rostov, there is also one mystical place, called Zeleny Ostrov (Green Island). It is located near the city, in the lower reaches of the Don, and it divides the river into two branches. Before World War II the island was occupied by NKVD troops and, according to witnesses, “something was being transported away from there at night by truck.” There are also stories about a certain black stone, which supposedly has a neuro-psychological impact: it causes fear, headaches, and even memory loss.

Cherry trees grow on the island and produce 4-6 times more fruit than the usual output. It is believed that those who taste the berries eventually fall ill with an unknown disease and die in agony. Scientists claim that rare chemical elements are found in the island’s soil, which do not occur in a free state on Earth.

Infamous for its criminal activity, "Rostov-Papa”, as it is still called out of habit, arose more than a hundred years ago. The large port’s prime location at the intersection of main roads and busy trade contributed to the city, in addition to traders and travelers, attracting many rogues and scoundrels.

Kirov Avenue (located east of the Voroshilov, crosses the main street of Bolshaya Sadovaya) used to be the center of the tenderloin district. This little island of mafia activity was named after Bogatyanov – and thanks to him the nickname “Rostov-Papa” was born. Today it is the center of the city, and it is completely safe.

Voroshilov and Budennovsky Avenues are also also a prestigious central district, lined with crowded dens and cheap restaurants. Rounders, petty thieves (pickpockets), and circuiteers (bandits, roaming from place to place) spent days and nights out on the fishery. Even the Soviet police appreciated the thieves’ mastery. They say that once the police requested one of the rascals to steal an American tourist’s passport – at the time they had to check foreign tourists. The pickpocket did his job, and then just as quietly returned the document to its proper place.

In 2018, Rostov-on-Don will host one of the stages of the World Cup. In mid-May, the unique customized tractors racing "Bison-Track-Show” will take place. Every year it is attended by more than 15,000 spectators. The main prize of the races is the “Belarus” tractor.

At the beginning of July, the Tatar folk festival “Sabantuy” will be held. The venue will be the Tatar cultural center, the “Yaktashlar”.

What to Take Away with You from Rostov-on-Don

Be sure to bring home the famous Don crayfish and smoked fish. You can tightly pack these “souvenirs” in large supermarkets. Also, Don wines can be purchased at the corner of Moscow and Semashko Street at two “Don wine” distributor stores.