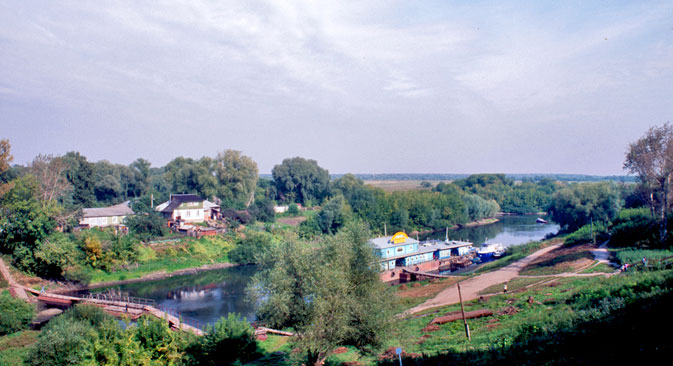 The destruction of Ryazan in the 13th centuries produced one of Russia’s few epics, but the city was rebuilt and boasts a number of historic monuments.

Among the ancient cities of the Russian heartland, few have endured a more turbulent history than Ryazan. Already an important town in the 11th century, Ryazan was completely devastated by the Mongols in 1237 and eventually revived at another location nearby.

Today, Ryazan is a growing city with a population of over half a million, conveniently located 110 miles to the south of Moscow. Among its several distinctions, Ryazan serves as a major administrative center of the Russian Orthodox Church. Indeed, the Ryazan kremlin has one of the most imposing cathedrals in all Russia.

Archeologists have determined that a settlement called Ryazan first appeared in an area inhabited for centuries by Eastern Slavs near the Oka River, a major tributary of the Volga.

The earliest mention to the area appears in the medieval chronicles in 1096, and by the middle of the 12th century Ryazan had become the center of a major principality that held sway over extensive territory in the Oka River basin. It had massive earthen-wall fortifications, portions of which have survived to the present as one of the largest archeological sites in Russia.

An especially active building phase occurred during the reign of prince Gleb Rostislavich, who ruled intermittently during a complicated feudal power struggle from 1145 until his death in 1178. In the decade from the late 1150s he built two masonry cathedrals – to the Dormition of the Virgin and to Sts.Boris and Gleb.

This period of growth coincided with incessant princely feuds, and came to a catastrophic end with the Mongol invasion of 1237-41. Ryazan was the first of the Russian principalities to be conquered, in late 1237. The Ryazan Prince Fedor Yurevich was killed in battle by the forces of Batu-Khan, which then laid siege to the walled town.

Details of the campaign are provided in a rare medieval epic, The Tale of the Destruction of Ryazan. On learning of her husband's death in battle, Princess Eupraxia threw herself from a tower (perhaps a church) rather than face shameful capture.

According to the epic, the town heroically resisted for six days, but the odds were overwhelming and the town was savaged. Modern confirmation of the slaughter has been provided by the discovery of numerous burial pits with scores of skeletons.

After the destruction of Ryazan, attempts to reestablish settlements in the immediate area were undercut by repeated Tatar raids over the following decades. By the 14th century, the local church and political leadership decided to reestablish Ryazan at the better-defended settlement of Pereyaslavl, 35 miles northwest at the point where the small Turbezh River empties into the Oka.

For centuries the town was known as Pereyaslavl-Ryazansky, but in 1778 the town was designated simply Ryazan. Thereafter, the uninhabited original site was called Staraya Ryazan (Old Ryazan), now the site of major archeological excavations. In the early 20th century a memorial church was built over the site of the razed Cathedral of Sts. Boris and Gleb, but it was largely dismantled in the Soviet period. There are now plans to rebuild the memorial, together with a tourism and educational center.

By the beginning of the 15th century, Pereyaslavl-Ryazansky had a large fortress (kremlin) whose earthen ramparts are well preserved to this day. Although the threat of Tatar raids waned, the region was afflicted by famine and disease at the end of the 16th century and wracked by violent disorders in the early 17th century during the dynastic interregnum known as the Time of Troubles.

Contemporary Ryzan has several dozen surviving churches, some of which date to the 17th century. They have an appealing variety of design typical of parish churches from the 17th to the 19th centuries. One of the best examples is the small Church of the Holy Ghost, built in 1642 in the Ryazan kremlin and gracefully decorated with a pair of "tent" towers.

But the city's greatest monument is the Cathedral of the Dormition, whose name derived from the 12th-century cathedral of the same dedication in Old Ryazan. At the turn of the 15th century, a masonry cathedral dedicated to the Dormition was erected in Ryazan. In the early 1680s, Metropolitan Avraamy undertook to build a much larger cathedral to meet the needs of an expanded diocese. Work began in 1684, but the completed walls collapsed in 1692.

After the initial debacle, the project was entrusted to the renowned architect Yakov Bukhvostov, who also had difficulties with the foundations and the roof vaulting for the immense structure. Over 130 feet in height, with five large drums and cupolas as well as extensive window space, the structure is balanced on an ingenious system of cellar vaults, which also support an imposing terrace platform for the cathedral.

The cathedral's roofline was designed as a horizontal cornice with decorative brick patterns. The tall windows were framed with carved limestone columns and pediments (the some 5,000 blocks comprising the limestone details were standardized, thus enabling the architect to complete the structure by 1699, a relatively short period in view of the complexity of the project and Bukhvostov's ongoing work elsewhere).

The window surrounds and the paired brick columns painted white that vertically divide the brick facades provide a palatial ambience to one of the largest churches of the 17th century – larger, in fact, than the Dormition Cathedral in the Moscow Kremlin.

On the interior, the Dormition Cathedral resembles a great three-story hall, like Moscow's Dormition Cathedral. The space contains four massive columns for the central and west bays, and two extended piers that support the east bay and the soaring 18th-century icon screen.

Like most Russian provincial centers, Ryazan gained a new city plan during the reign of Catherine the Great. The plan, which is preserved to this day, was implemented in 1778, the year in which the town name was shorted to "Ryazan."

The Moscow highway also passes through other historic centers such as Kolomna, thus making Ryazan a rewarding tourist destination. On approaching the city, it is worth stopping at the lovely village of Konstantinovka, birthplace of Sergei Esenin (1895-1925), Russia's most beloved 20th-century poet.