Kostroma: The home of Russia’s Snegurochka, the snow maiden 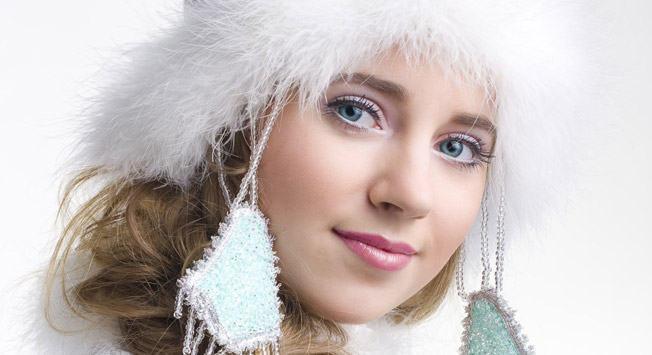 Gleb Yefanov, snegurochkadom.ru
Kostroma is a wonderful place to visit any time of the year, but never more so than during the holidays. There are few sights more enchanting than taking a walk along the riverfront promenade with snow falling on the Volga as the golden domes of the Ipatievsky Monastery glitter in the distance.

Snegurochka is the granddaughter and assistant of “Ded Moroz” also known as Father Frost, Russia’s version of Santa Claus. While Santa Claus is rumored to have residences in Finland and the North Pole, Ded Moroz is a proud patriot and maintains a home in Veliky Ustyug in the Vologda Region. His estate is a major tourist attraction receiving more than 200,000 guests a year. See Veliky Ustyug: The Russian Santa's Home.

Snegurochka does not have roots in Slavic mythology and only came into being in the late 19th century. However, to many Snegurochka appears to be as eternal as Russia itself. 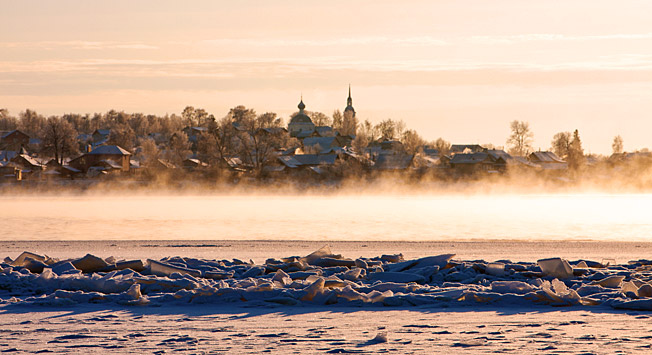 The view of the city of Kostroma and the Volga river. Photo credit: Lori/Legion-Media

One of Russia’s most significant playwrights and Kostroma Region native Alexander Ostrovsky was partly raised by a nanny who filled his days with fairy tales. It was she who gave him the inspiration to bring Snegurochka to life.

Ostrovsky finished the play “The Snow Maiden” in 1873 (featuring music composed by Tchaikovsky), which was later adapted into a four-act opera by composer Rimsky-Korsakov premiering in St. Petersburg in 1882. A ballet version was also staged in 1878. 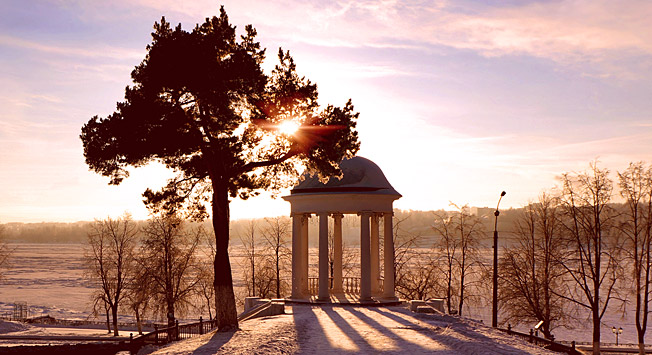 The Ostrovsky pavilion on the Volga river shore in Kostroma. Photo credit: Lori/Legion-Media

Ostrovsky lived in Kostroma at Prospekt Mira 1/2 and the city’s main theater is named for him. He did much of his writing, including “The Snow Maiden,” at his estate in the village of Shchelykovo 120 kilometers from Kostroma. His former house is a museum.

There were predecessors to Ostrovsky’s version. Alexander Afanasyev, considered the Russian equivalent of the Brothers Grimm, wrote a story in 1869 about a character called “Snegurka.” The tale tells involves the poor peasants Ivan and Marya, who build a doll made of snow that comes to life.

In Ostrovsky’s version Snegurochka is the daughter of Spring the Beauty and Father Frost. She longs for human companionship, but lacks the capacity to love. Her mother bestows this ability on her, but as she is made of snow, she melts when her heart warms after she falls in love.

By the reign of Nicholas II, Snegurochka had become associated with winter holiday celebrations. She was part of Christmas events until the Soviet Union banned religious holidays in the years after the Revolution. She was revived when New Year’s became the major winter holiday, replacing Christmas, in 1935. Since then Snegurochka, who had now become Father Frost’s granddaughter (instead of his daughter), has become a mainstay of holiday parties all over Russia. Along with her grandfather, she usually arrives bearing gifts. 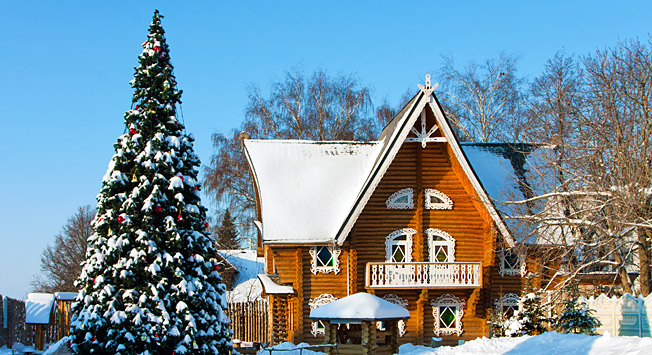 It isn’t too hard to find Snegurochka in Kostroma. She is so beloved in her hometown that her birthday is celebrated in an official capacity for two days. In 2015 Kostroma will celebrate all things Snegurochka from March 27-28.

Located in a restored 19th century building near the waterfront, Snegurochka's Fairy Land is a snow maiden’s paradise. Snegurochka welcomes guests and explains the uniqueness of regional folk traditions and presents other characters from Ostrovsky’s story. There are large collections of regional costumes and dolls and handicraft classes for young children. 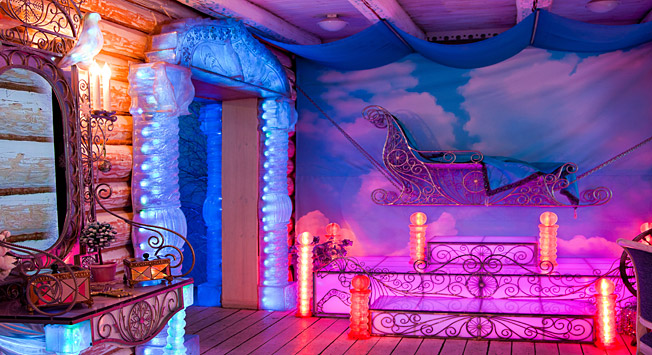 The interior inside of Snegurochka's terem (wooden house) in Kostroma. Photo credit: Lori/Legion-Media

The Snegurochka Hotel takes its inspiration from Kostroma’s famed snow maiden and expresses it at every level. There is a souvenir stand featuring every Snegurochka item imaginable. The hotel’s restaurant “Metelitsa” (snowstorm) hosts a New Year’s party every weekend night, although it is often closed in the summer for weddings. It features 55 rooms ranging from 2300-6700 rubles (about $42-$123). Attached is Snegurochka's Ice Palace, a winter wonderland consisting of an ice chamber with a stable temperature of -14 Celsius and an interactive excursion.

The hotel has a special New Year’s package from Dec. 31 until Jan. 2, with a packed itinerary that includes a New Year’s party, a 1980s dance party the following night, a traditional New Year’s Eve sauna, a visit to the Ice Palace and a special lunch featuring old Kostroma recipes. This package is aimed at families and childcare services will be provided on Dec. 31. It is safe to assume that Snegurochka and her grandfather will join the party:  hotel-snegurochka.ru/2015.

The shop, Souvenirs from Snegurochka, features designer linens, handmade toys and handicrafts traditional to the area.

There is also the recently opened Snegurochka's residence. She offers tours and different interactive programs everyday from  Wednesday  until  Sunday. Children  can hold their birthday parties there and classes are offered on everything from making dolls to holiday decorations. 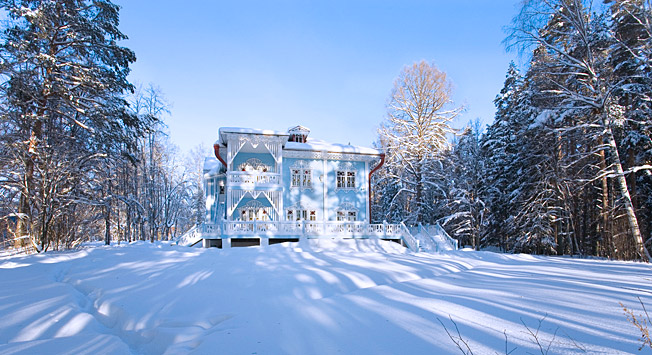 Snegurochka's residence in Schelykovo manor where she works in Kostroma Oblast. Photo credit: Lori/Legion-Media
In some ways Snegurochka has become too big for little Kostroma.

Nationally, she is linked with the city’s identity as one of the lead characters in the Russian National Dance Show “Kostroma” in Moscow. Popular among foreigners, it tells the story of ancient Rus’ and placing Snegurochka at its center has done much to cloud her humble provincial origins. See www.nationalrussianshow.ru

She had the starring role in two Soviet films. One of them, a 1952 animated version hews closely to Ostrovsky’s version and includes Rimsky-Korsakov’s music.

Famous Slovenian poet Svetlana MakaroviÄ released a fairy tale based on the character titled, “Snegurochka” affirming her lifelong love for Russian children’s tales. In 2004 American artist Ruth Sanderson, who specializes in illustrated Christmas books, released a book called, "The Snow Princess", also based on you know who.

By car: Take highway M8 from Moscow to Yaroslavl and from there follow A113 to Kostroma. Approximate travel time is 4 hours. It's important to leave Moscow at the right time to avoid the usual traffic jams.