6 locations in Russia, where traveling to is dangerous for tourists 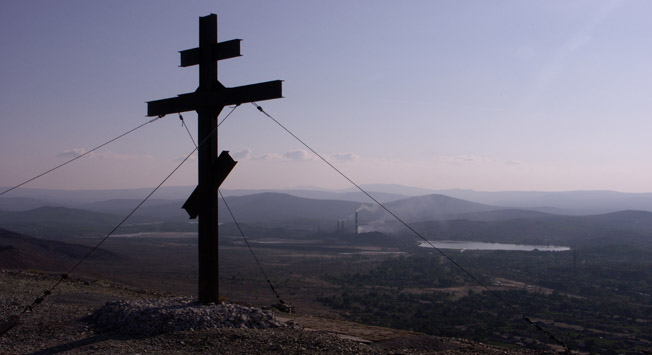 ITAR-TASS
In Russia there are many wonderful places with gorgeous nature and beautiful architectural monuments. But as in any country, there are corners in which a visit might become hazardous to your health and even life threatening.

Photo credit: Lori/Legion-Media
In 1989 UN experts called Karabash in Chelyabinsk Oblast (2200 km from Moscow) the “black dot of the planet.” If you go to the Cross of Repentance over Karabash, what a person can do to nature becomes clear: Bald black mountains, orange water, land cracked like that on Mars. The city is called an “apocalypse of living nature.” Since 1974 copper smelting, which has destroyed all life within a radius of tens of miles, has attempted to be shut down several times. This was successful only in 1989.

Poisoned mountains continue to erode, as erosion was not successfully stopped after feeble attempts at remediation. From the top of the mountain with a cross, which is known as “Bald” (Lisaya), it becomes clear that the language of the dead, toxic sludge more closely resembles the beautiful lakes of Chelyabinsk. On the other side of the mountains, black ranges of slag dumps are visible, the foot of which shelters the huts of locals. Those who have visited the “black spot” tell of witnessing a surreal experience from the copper valleys, and compare Karbash with “the boundary between two worlds”: the living and dead.

2. Norilsk — “The city which was killed”

Photo credit: Geophoto
In this city that has never been blessed with beauty or unusual ancient architecture, and is situated in the north of the Krasnoyarsk territory (2800 km from Moscow), lies black snow and the air tastes of sulfur. This territory was used for the production of heavy metals — copper, nickel, lead, selenium and zinc. The city and its residents became contaminated by the waste of their production. It is an environmental hazard to the population of the city and the surrounding areas due to the fact that Norilsk is a derivative of one of the world's largest mining and simultaneously metal-producing plants.

The factories of Norilsk smelt ore on the permafrost, producing more than 40 percent of the world’s palladium, nearly one-fifth of Russian nickel and two-thirds of copper. Counterparts of the industrial region Norilsk (the primary city) are not found anywhere in the world. For many years, Norilsk has retained its status as the dirtiest city in Russia. Although the city has no official status as a closed territory, since 2001 the entry of foreigners into the city has been prohibited and is possible only with special permission from authorities.

Photo credit: Alexey Kudenko/RIA Novosti
On the impressive Kamchatka peninsula, famous for its ridges of volcanoes and clean untouched nature, is a surreally beautiful but deadly dangerous lake of a bright-turquoise color, situated in the crater of the volcano Maly Semyachik (6700 km from Moscow). The diameter of the lake is about 500 meters and its depth is roughly 140 meters. Despite the fact that the lake even has its own “beach,” swimming in it is not worth it even for the most fearless extremists: The chance of exiting the lake unharmed is zero. It is an acidic lake, which was formed by a powerful underground explosion about 400 years ago.

The composition of the water includes an abundance of sulfur, fluoride, chloride and sulfate acids. It is because of this “explosive mixture” that the water of the lake in the crater of Maly Semyachik has such a fairytale-like turquoise color. The acidic lake in the crater does not freeze in the winter, even when all the slopes of mountains in Kamchatka are covered with snow. Maly Semyachik and its acidic lake are not always quiet — the volcano is active, but its last known eruption occurred in 1952.

Photo credit: Lori/Legion-Media
The name of the Kolka glacier in Karmadon canyon in Northern Ossetia (1800 km south of Moscow) has gained notoriety across Russia since the terrible tragedy of September 20, 2002. On this day, the glacier, moving at a speed greater than 100 km per hour, completely wiped out the village of Upper Karmadon and the crew of the film “The Messenger,” headed by 30-year director Sergei Bodrov. More than 100 people perished. The alleged remains of the crew, despite an intensive search, were found only a few years later. But the glacier had a notorious reputation long before the tragedy. It is known that a large group of people and animals perished as a result of movement of the glacier rock in 1902. The insidiousness of Kolka is that the activation of the glacier’s movement starts so slowly, almost imperceptibly, as if on the prowl, that you may be very surprised.

5. The deadly peak of Elbrus

Photo credit: Lori/Legion-Media
Rising more than 5600 meters above sea level, Elbrus is called the “two-headed mountain” because it consists of two peaks: the highest western point and the highest eastern point, which is lower than the western peak by just 21 meters. Just as Everest, which is the highest peak in the world and located in Asia, is called a “cemetery without crosses,” Elbrus, the highest peak in Russia and Europe, is acknowledged as a deadly place. According to experts’ estimates, in attempting to climb this extinct stratovolcano in the Caucasus, roughly 15 to 30 people die each year. On Elbrus at an altitude of 4200 there is a rock known as “Cemetery of Climbers,” which is marked by numerous signatures of the names of those whose lives were cut short by this peak.

There is another danger: despite that fact that Elbrus is officially considered the top of an extinct volcano, because of rapid melting of ice and detection of volcanic activity under the mountain, many specialists consider it potentially active, estimating the possibility of volcano awakening this century. 11 cubic meters of ice are stored on the top and slopes of Elbrus, making it one of the most potentially dangerous volcanoes on earth.

Photo credit: Geophoto
Not one tour operator will dare to take tourists to the Manaraga mountain, located in the remote area of the Russian Nether-Polar region in the Yugyd Va National Park (1600 km from Moscow). Manaraga is the most picturesque and dangerous peak in northern Russia.

The ancient indigenous people of the Komi republic treated the mountain as a sanctuary, considering it an animate object: in order to “find common ground” with Manaraga, people even in the 11th century organized ritualistic games, as evidence found by archeologists of ruins of stone temples with sacrificial stones shows. Manaraga (which in Nenets language means “bear paw”) is coincidentally also called the “voodoo mountain.” It’s mystical paradox is that even though the mountain has a height of 1662 meters, which does not seem too extreme, experienced climbers say that it can make even professionals helpless, in the literal sense of the word it “does not let” mountain tourists on to its peak. Manaraga has not been summited — it is impossible to climb. Obstacles such as unpredictably changing weather conditions or supernatural occurrences often lead to fatalities. Guessing at the mysteries of nature, in the wild edges of the Nether-Polar Urals, it is difficult to remain until the end of materialists.