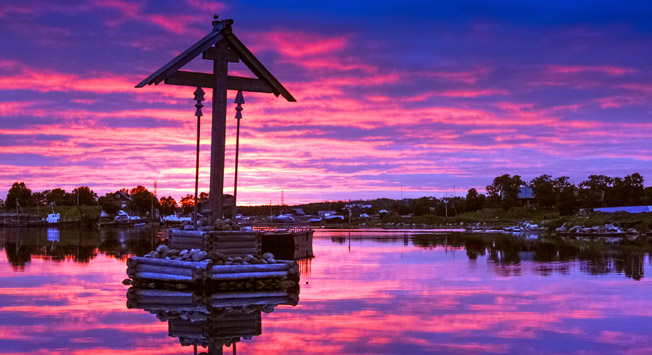 Getty Images
Most people associate Russian culture with the names of writers like Tolstoy and Dostoevsky. Russia has a rich literary tradition, and today many Russian novelists are household names. This month, RBTH picked ten of the best literary travel destinations to visit on your next trip to Russia.

Aleksandr Solzhenitsyn published his first novel, One Day in the Life of Ivan Denisovich, in 1962. The book explores the life of a prisoner in a Soviet gulag, or labor camp, and won Solzhenitsyn a Nobel Prize. Solzhenitsyn spent years in the camps himself and went on to write, The Gulag Archipelago, about labor camps on the Solovetsky Islands northeast of St. Petersburg.

The tour operator, Kola Travel, can arrange trips to the Solovetsky Islands which include stops at places in The Gulag Archipelago. Email infor@kolatravel.com for more information.

Vladimir Nabokov was born in 1899 to an intellectual family in St. Petersburg. Nabokov’s family went into exile during the Russian Revolution and he spent much of his life in Europe and the U.S. While in America, Nabokov wrote some of his best novels, including Lolita and Pale Fire.

The St. Petersburg house where Nabokov grew up is now a museum (47 Ul. Bolshaya Morskaya) complete with photos and family memorabilia like Nabokov’s typewriter and butterfly collection.

Mikhail Bulgakov started his career as a doctor and became a writer after the Russian Civil War. Bulgakov wrote eminent plays that were banned by Stalin. His most famous work, Master and Margarita, is a novel about a visit from the Devil to Moscow. Margarita was published over 25 years after Bulgakov, and Stalin, were both dead.

The Bulgakov House-Museum (10 Ul. Bolshaya Sadovaya) in Moscow is near the Patriarch’s Ponds where the Devil appears in Margarita and features exhibits in the same house where Bulgakov wrote the novel.

Fyodor Dostoevsky is best known for his books, The Brothers Karamazov, and Crime and Punishment, and often considered one of the world’s best novelists. Dostoevsky’s writing was influenced by the four years he spent in a labor camp near the Siberian city of Omsk.

Today, The Omsk State Dostoevsky Literature Museum (1 Ul. Dostoyevskogo) contains exhibits of the cell where Dostoevsky lived during his years in Siberia. If you’re a Dostoevsky fan, a visit to Omsk is a must.

Nikolai Chernyshevsky’s novel, What is to Be Done?, was one of the most widely-read books in late 19th century Russia. The novel focuses on a group of women who start a sewing collective and became a favorite of revolutionaries like Lenin and Stalin. Many obscure Russian towns are named after writers. The village of Chernyshevsk, about 300 kilometers east of the Siberian city of Chita, rests below a striking hill and features a statue of Chernyshevsky. It’s a great place to stop and stretch your legs on the Trans-Siberian train ride across Russia.

Maxim Gorky was a hobo, writer, playwright, and dedicated Marxist who came of age in late 19th century Russia. Gorky had a turbulent relationship with Lenin, but during Stalin’s reign, he helped found the writing style of Socialist Realism, the state-approved method of literary composition.

In 1931, Gorky was given a lavish art nouveau mansion in Moscow which now contains a small house museum (6/2 Ul. Malaya Nikitskaya) dedicated to Gorky. The writer’s former home is one of Moscow’s best-preserved examples of art nouveau, and it attracts visitors for both its literary and architectural significance.

Ivan Turgenev was born in the city of Orel in 1818. He became one of Russia’s literary giants with, The Sportsman’s Notebook, and Fathers and Sons, which many consider his best works. Both books are often read as social documentaries that address the hardships of serfdom in 19th century Russia.

Turgenev wrote Fathers and Sons at Spasskoe-Lutovinovo, his family estate outside Orel. Email spasskoye@turgenev.mkrf.ru  to set up a guided tour of Turgenev’s home.

The wives of many Russian authors played a key role in their husband’s work. Dostoevsky had Anna, who served as his stenographer, Tolstoy had Sophia, who edited his work, and Russian poet Osip Mandelstam had his wife Nadezhda.

During the Stalinist purges, Osip was sent to Siberia and died near Vladivostok. Nadezhda memorized her husband’s poems and published them after Stalin’s death.

Nadezhda also wrote two well-received memoirs about her life in the Soviet Union. Today, her grave can be visited in Moscow’s Kuntsevo Cemetery. Catch a bus there outside Metro Kuntsevskaya.

When most people think of Russian literature, the epic novels, War and Peace, and Anna Karenina, by Leo Tolstoy are the first which come to mind. Tolstoy wrote each of these books at his family’s estate, Yasnaya Polyana, near the city of Tula. Set on a sloping hill, Tolstoy’s home still remains much like he left it a century ago. Visitors can tour Tolstoy’s house, visit his grave, or even take a carriage trip around the estate grounds. Email tour@tolstoy.ru for more.

Anna Akhmatova is one of Russia’s most well-known poets. Born in 1889, her career spanned before and after the Russian Revolution. In her poetry, Akhmatova explored issues like a woman’s role in society. Far from a modest woman of the day, Akhmatova had many lovers and was known for wearing outfits that showed off her svelte body.

Today, the Anna Akhmatova Museum at the Fountain House (53 Ul. Liteiny Prospekt) is located in the St. Petersburg apartment where Akhmatova lived for almost three decades and includes her belongings and rotating art exhibits.