Out with the Old, In with the New: the Legendary Journey of Peter the Great 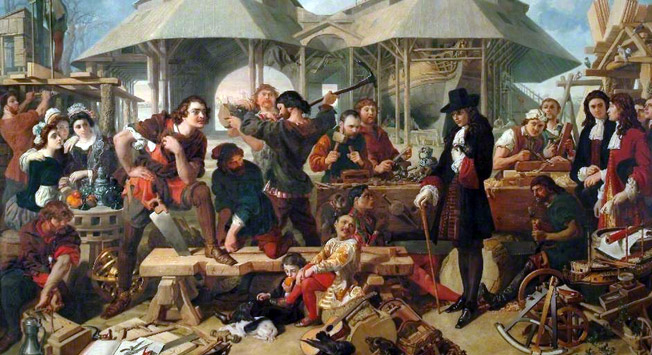 Daniel Maclise, wikipedia.org
Nicholas II was the first Russian Tsar to travel to the Far East and Siberia. However, the inspiration for educational trips for future heirs to the crown came from Peter the Great’s legendary European journey of 1697-1698.

Peter the Great was that rare autocrat that liked to lead by example. He viewed his trip to Europe as a journey of knowledge that would have the potential to positively impact the people.

From an early age Peter was fascinated by shipbuilding and sailing, and always had ambitions of making Russia a major maritime power. When Peter became the sole ruler of Russia in 1696, the Russian Empire had access to only one port, in the North Sea at Arkhangelsk. At the time the north Baltic Sea was controlled by Sweden, and the Black and Caspian Seas were commanded respectively by the Ottoman Empire and the Safavid dynasty, an early Persian state. After capturing the fortress of Azov from the Ottomans in July 1696, Peter was determined to gain further access to the Black Sea. But, he knew that at that moment Russia couldn’t take on the Ottoman Empire alone.

Thus, Peter came up with the idea of his Grand Embassy, a diplomatic mission with the goal of securing allied support against the Ottoman Empire. In particular this trip sought to strengthen the Holy League, a union of Christian empires that Pope Innocent XI had formed in 1684. Russia joined in 1686. Peter also sought to use this journey to acquire knowledge and technology and hire foreign specialists for service in Russia.

In 1697 Peter set off with a 250-person entourage on an 18-month journey. Officially the “Embassy” was headed by three of his closest advisers and Peter used a pseudonym throughout the trip, Pyotr Mikhailov, as he wished to be anonymous. Although Peter was the first Tsar to travel abroad, he was easily recognizable as he was more than two meters tall. Records from the time attest that few European leaders were fooled by the disguise.

The first leg of the trip was considered unsuccessful. He met with the heads of France and Austria. France was unwavering in its support for the Ottoman Sultan and the Austrian leader was mostly concerned with keeping things quiet to their east, so that they could pursue their objectives to the west. Europeans on the whole were largely uninterested in Peter’s ambitions.

From there, Peter moved on to the Netherlands, where he took on an apprenticeship as a shipbuilder in Zaandam (the house where he lived is now a museum: http:/ /www.zaansmuseum.nl/index.php?id=52). For the Tsar, learning about naval technology was crucial to his objective of creating a truly modern navy, and Dutch sailing vessels were considered among the most advanced in the world at the time. The home where Peter stayed belonged to Gerrit Kist, a Dutch blacksmith that had worked for a stint in Moscow for the Tsar. Kist and the Tsar remained friends for life.

Peter’s visit to the Netherlands was the most influential of any country he visited. There, he acquired not just technical knowledge, but also learned about how Europeans lived. One notable technology that Peter discovered was the fire hose. This was especially important considering the prevalence of fires in 17th Moscow. He learned about the technology from its inventor, Jan van der Heyden. Afterwards he went to Amsterdam and with a little help from its mayor, Nicolaas Witsen (an expert on shipbuilding), Peter was able to put what he had learned in Zaandam to use by going to work at the largest shipbuilding yard in the world. He spent four months at the wharf, which was owned by the Dutch East India Company. In addition to acquiring vast maritime knowledge, Peter also set to work hiring skilled workers, sailors, and lock builders. But his biggest prize was probably luring Cornelis Cruys, a high-ranking official in the Dutch Navy, to come to Russia. There, he was appointed the vice-admiral for the Russian Navy and became the most influential adviser to the Tsar for maritime affairs for decades to come.

From Holland Peter moved on to England, where he met King William III and toured the cities of Oxford and Manchester, where he learned about city planning. He would put this knowledge to use several years later when he founded St. Petersburg. After England, Peter’s entourage collectively journeyed to the cities of Leipzig, Dresden, and Vienna, and met with August the Strong, the King of Poland and Grand Duke of Lithuania, and Leopold I, the Holy Roman Emperor and a frequent antagonist of the Ottoman Empire.

Peter was forced to return early to Russia in 1698, as the Streltsy—armed Russian guard units—had rebelled. The uprising was crushed before Peter made it back from England.

Peter was very impressionable during his “Embassy” and came back convinced that certain European customs were superior to Russian ones. Peter announced upon his return that nobles had to cut their beards (or pay a tax) and wear European clothing. The calendar was changed to better align with the European one. The rest of Peter’s reign until his death in 1725 was marked by several victories over Sweden, which led to Russia’s status as the supreme power in northeastern Europe. While Russian troops engaged Ottoman forces on several occasions, no significant settlements were made. St. Petersburg was founded in 1703 and the country began to look west.

One of the first things that Peter did upon his return was to divorce his wife, Eudoxia Lopukhina. For Peter the Great it really was out with the “old” and in with the “new” after this life-changing journey.