Contemporary art in Moscow: a guide to museums and galleries 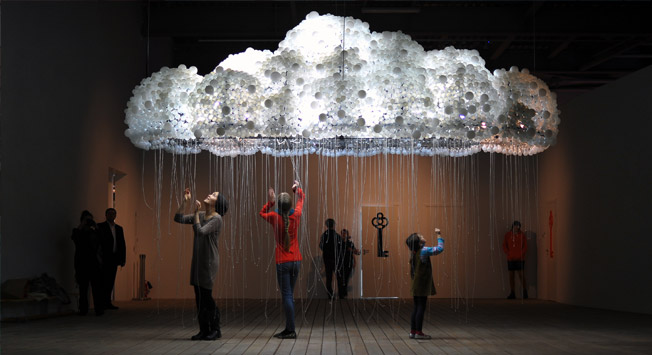 Ramil Sitdikob, Ria Novosti
Russian artists often attempt to be "holier than the Pope" – more modern, relevant, and avant-garde than those abroad. In general, it is not surprising that contemporary art in Moscow is widespread at hundreds of public and private venues - museums, galleries and fairs.

This alternative to the two largest public sites appeared in Moscow in 2008. Russian billionaire Roman Abramovich and his girlfriend Daria Zhukova opened the Centre for Contemporary Culture "Garage" in a former bus garage from 1920. Now the main area is located in the Gorky Central Park of Culture and Rest. Japanese architect Shigeru Ban designed a temporary pavilion there, and eventually the park will be a permanent building for "Garage," a concept that is being developed jointly with the Bureau of Office for Metropolitan Architecture (OMA) architect Rem Koolhaas. Recently, the center was renamed the Museum of Modern Art. Today, at "Garage" visitors from many countries can experience the exhibit Do it, in which viewers create their own works of art using the instructions made by artists. One of the curators of the exhibition and the head of the Education Department Mityushina Anastasia commented: “ ‘Garage’ is a resolute museum, research institution, and experimental institution. We implement and develop projects for the Russian public that are innovative and unusual not only for the Russian audience, but also for the artists."

(Pavilion at the territory of Gorky Park. Gorky)

In the near future we plan to establish a museum of contemporary art on the ground level of the state-level National Centre for Contemporary Arts (NCCA).

This research center has its own collection - more than 1,500 works by 230 artists. NCCA is the founder of the annual competition in the field of contemporary visual art "Innovation," as well as the Moscow International Biennale for Young Art, which will occur for the fourth time from the 26th of June to the 10th of August this year. An annual festival of media art, VideoFocus, will be at the NCCA until the end of June. VideoFocus showcases the latest trends in the modern domestic and global visual art: video art, digital art, film, art Science. NCCA has branches in other cities of Russia - Yekaterinburg, Kaliningrad, Nizhny Novgorod, St. Petersburg and Tomsk Vladikavkaz, where it is the main venue for contemporary art.

On Thursday, the entrance to the exhibition hall is free

In Moscow, the NCCA’s competition is the Moscow Museum of Modern Art. It was created in 1999 based on the collection of the President of the Russian Academy of Arts, Zurab Tsereteli (the collection included more than two thousand works). Today, the museum spans four locations and its collection includes the main stages of the avant-garde movement. Much of the collection consists of works by Russian artists, primarily Russian avant-garde classics - Malevich, Chagall, Goncharova, Larionov, etc. There are also works by foreign artists: Pablo Picasso, Fernand Léger, Joan Miró, Giorgio de Chirico, Salvador Dali. Senior Researcher at MMSI Daria Polonskaya-Buslaeva told RBTH: "We work with contemporary artists from Russia, as well as participate in international projects and the promotion of contemporary art. Parallel in the MMSI held several exhibitions each year we will show the imported large projects." Until September, at the MMSI the major exhibition is dedicated to the development of German contemporary art.

Closed on the third Monday of every month

Free admission on the third Sunday of every month

In addition to contemporary art museums in the Russian capital, galleries exhibit and sell dozens of artworks. A large art cluster is located in Winzavod, a former 19th century brewery and Soviet wine plant. Today at Winzavod there are 10 galleries of contemporary art, including ones as large as XL, Regina, Aidan, and Marat Gelman Gallery.

Some galleries have free entry

Another site brings together several galleries in the territory of the former confectionery factory "Red October." This is the Lumiere Brothers Center of Photography. In Moscow only a few private galleries deal with contemporary photography; however, the main area of contemporary photography is located on Ostozhenka – where the Multimedia Art Museum has grown on the basis of the Moscow House of Photography. Now the museum not only holds the photo exhibition, but is also engaged in projects in other areas of art. Also in its arsenal-- Salaries, a photography contest and an online newspaper.

Tickets: prices vary depending on the show

Apart from the permanent contemporary art venues in Moscow, each year the Art Moscow Fair takes place in the Central House of Artists (around the 17th-21st of September 2014). The fair brings together dozens of Russian and foreign galleries. Here, viewers can see almost the entire spectrum of art that Moscow galleries offer.

The most important event is held every two years. The Moscow Biennale of Contemporary Art was inferior to its foreign counterparts before it grew, but within months at the event in the Russian capital, you can see a lot of interesting exhibits, and a world-class curator always curates the main project. The next Biennale will take place in 2015.